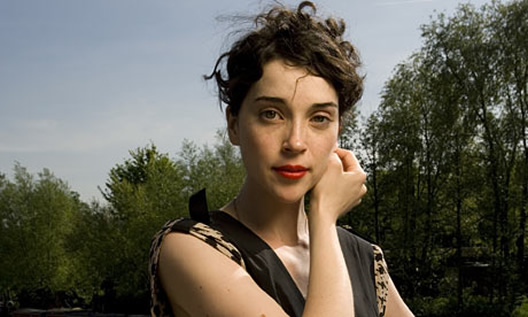 After years touring in epicly-sized folk collectives (Polyphonic Spree and Sufjan Stevens), Annie Clark aka St. Vincent has made a splash of her own. In 2007, her debut album "Marry Me" was universally praised by everyone from indie snobs to the New York Times. Her blend of hushed storytelling and powerful arrangements captivated critics, but it is her sharp wit and magnetic stage presence that have solidified her indie dream girl status. Annie chatted with me while on holiday in Texas to discuss champagne cocktails and food that hurts so good.

Do you have any specific dining requirements or restrictions in your life at the moment?
No, I am neither vegetarian nor vegan. I mean I dabbled with vegetarianism in college but I mean, who didn't?

What are your favorite New York places you miss when on tour?
I like Westville a lot. I usually go for the brussels sprouts and occasionally the sweet potato mash. The green peas, shallots, and bacon are pretty slammin'. The fennel is pretty good and so are the artichoke hearts. I had a book I was reading recently and I was literally there every day until I finished it — the morning time is really nice there.

Your family is in Texas and you used to live there for a while. Of course, Texas is pretty serious about their food from barbecue to Tex-Mex to crazy state fair concoctions. Do you have a local Texan food you feel strongly about?
I didn't grow up eating tons of barbecue, but I know some Texans are really barbecue aficionados. But Tex-Mex — that's one thing that I really really miss when I'm in New York. The thought of having to pay for chips and salsa is a crazy thing. You should just sit down, there should be a bottomless thing of chips and really good salsa and then your meal starts. This whole thing about sitting down and ordering chips and salsa and paying $5.00 for it is insane. In Dallas, a lot of times we'll go to this place called Mi Cocina. It's a neighborhood Tex-Mex place, we call it "old trusty" because you can always count on it. The quality is always the same and it's always really good. There are also some places in New York that are more upscale — they're decidedly not Tex-Mex — but they're good too. Sometimes I'll romp over to Cafe Cluny in the West Village or Cafe Gitane on Spring Street. The avocado toast there is the jam!

You've said that after your first stint living in New York, you were forced to move back to Texas after running out of money. Did you develop any odd food habits during this time, or any go to cheap eats?
Well I cleaned out my refrigerator before I came down to Texas for the holidays this year and I had something really tragic, like, maybe no food, an expired thing of milk, rows of condiments ostensibly for meals I will never cook because I don't cook, and a bottle of champagne. Haha? I mean, I'm not good at cooking — I've never invested time in that skill. And also New York really de-incentivizes you because there is so much food you can get here that is so much better than any food you could make. You know, just pop out the door! I mean, sometimes I'll be excited if I remember to buy a box of cereal or a thing of organic nuts, and I'm like, "Okay, cool, I can eat in my house!"

When touring away from big cities, do you have any regular chains or fast food places you hit regularly?
It's very rare that I'll eat fast food. But occasionally on tour we'll have these things called "Abuse Your Body Day." And on that day you can eat all the fast food you want. And I mean, "Abuse Your Body Day" coincidentally has to be on an off-day because you can't really sit down with like Nachos Del Grande and then shimmy into a tight little dress and sings song all night. It's is usually at the point of the tour when everyone is beyond exhausted and kind of slap-happy I guess.

On "Abuse Your Body Day" you can stop at as many fast food places as you want. When you stop at the gas station you can get down with as much Laffy Taffy as you damn well please. And you can drink that night. So "Abuse Your Body Day" is really the only day that is allocated for fast food eating because I you get really bored with the things that are on your rider like hummus or Pace Picante Sauce. So it's usually the focus of one day where we'll be like, "Okay, what city are we going to and where's the best place by the venue where we can go." Basically a satisfying meal takes on so much importance.

So which cities have delivered on the satisfying tour meal?
I know I can always find a good meal in Portland, Oregon. There's a great place called The Farm Cafe that is right by the Doug Fir, and we have played a lot there. And this is a little bit of a tie-in of not exclusively food, but The Ace Hotel there has a restaurant that has Stumptown and that is the fucking jam! That is such a high point, to be in Portland and Seattle and know that you can get Stumptown Coffee. Also in San Francisco there's Blue Bottle, which is really great. Basically the Pacific Northwest is always very soothing and not oppressive in pretty much all ways.

So as an inverse to "Abuse Your Body Day," do you have any foods you swear by for staying healthy on the road?
Yeah, there are some tricks. What you have to do to make sure that the promoter who is buying your rider backstage goes to the health food store, you have to put something really obscure that you can only get the health food store. So you figure, once they're at the health food store they'll probably buy organic fruits and vegetables and whatever is on the rest of the rider. Sometimes Kombucha will be on the rider, that's kinda fun for a little extra pep in your step that isn't coffee.

And if I start to feel like I'm getting sick, usually I'll just load up on vitamin C and fruits and vegetables. But I think when you're on tour, your bodies are kind of merciful. Like, my body knows that when I'm on tour it really can't get sick so it holds out. So you'll get back from like five weeks on tour and then it knows, "Okay, now it's time for that stomach bug or that flu you've been putting off. Here's your reward!" The real jam is just going to Whole Foods or the health food store and stocking up at the salad bar for the day? but that gets kind of boring so you have to spice it up with things like? well... champagne!

Well that leads us to the next most important question - do you have a favorite drink on tour?
I don't really drink before shows because it doesn't really help me. Plus a lot of times you're so wiped after the show that it's like "Ugh!" and you kind of have to keep your "instruments" in good working order. But recently I'm getting into having a glass of champagne after the show because the with champagne it always feels like a celebration!

Can you describe your best food experience on tour on far?
I would say it would be going to The Farm Cafe in Portland and I'm spacing on what I had for my entree, but I remember that the dessert was like a bacon-wrapped date and I want to say there was blue cheese and then this balsamic reduction. It was incredible! And, you know, it covers all the five food groups!

So do you ever splurge on fine-dining on the road?
Fuck yeah! There is a place in New York that is really pleasant called Raoul's on Prince and Thompson. It's funny because on the weekdays it's a very Wall Street bar, people with 401K's and stock portfolios and things I really have no concept of. But the food is really great and the bartender always knows your name. I mean, it's really nice, you know!? One time I was there and Mayor Bloomberg was eating in the back, and that's not really my scene but it's a fun New York moment.

There's also a place in New York on 4th St. between Avenue B and C with great cocktails called Elsa. They've got some good tequila drinks, they just need to be bigger. Their glasses are really dainty and beautiful, but you know, come on. Momofuku is really good too, but it kind of falls into "Abuse Your Body Day" because it's not my go-to everyday place, I don't think I get down with pork buns every day or fried ice cream. It's like high-brow Texas State Fair, really! But it goes without saying, the "cereal milk ice cream" there is really outstanding.

You've played tons of festivals across the country over the last few years, which do you think has the best food?
Coachella has pretty good catering. Often times at a festival I'm not usually walking around getting food from the food carts and things. I'm just usually going grifter-style getting stuff from backstage. But I remember Coachella had particularly good catering. And Sasquatch too!

Okay time for the lightning round!

Watch St. Vincent's video for the single "Marrow" from her latest album here:

Also check out St. Vincent playing "Paris Is Burning" from her debut album on Le Blogoteque's Take Away Show: