Share All sharing options for: Top Ten Beers From 2010 You Should Drink in 2011 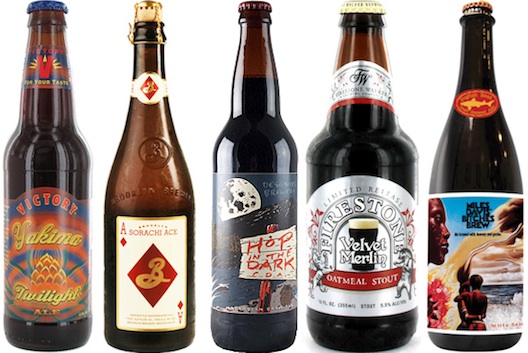 It was a great year for craft beer, with scores of innovative new breweries popping up, wild styles going mainstream, a cavalcade of top restaurants like Eleven Madison Park embracing the art, Sam Calagione’s star turn on Brew Masters (Discovery Channel), and too many other toast-worthy developments to list. More than anything, it was a great year for new American craft beers released from coast to coast. Here, in no particular order, is the Eater Top Ten American craft beers of 2010. (And note, of course, there were hundreds of other on-draught-only experiments, one-offs, and single-cask variations that were as quaffable as they were hard-to-find, so all presented are bottled releases, else the picks be obnoxiously esoteric.)

Massachusetts’ Pretty Things Beer & Ale Project is dubbed a gypsy brewery, because the proprietors guest brew in friends’ facilities, lacking their own (a matter of time, one suspects). Inspired by classic Belgian bucket list beers like Saison Dupont and XX Bitter, it’s a bold, rustico table ale with enough edge and spicy zing (though no spices are added) to hold the palate, plus a fresh, grassy stable of hops. Superb. (www.prettythingsbeertoday.com)

2010 shall hitherto be known as Year of the “Black IPA” or the Year of Cascadian Dark Ale (CDA) or the Year of India Black Ale (in the wording of the Brewers’ Association), and Lord-knows-what-other-moniker will seize beer geekdom next. What it means to the layperson is a medium-bodied ale of very dark complexion with a sturdy lashing of hop aroma and bitterness, best enjoyed fireside. It’s a matter of practically Talmudic debate who truly brewed the first example, but few would debate that Oregon’s Deschutes’ piney, onyx-black version isn’t worth seeking out. (www.deschutesbrewery.com)

Once known as Merkin, this Paso Robles-brewed stout is an exceptional example of a style that once seemed doomed to the craft beer dustbin of history: the 1980s, when mostly unassuming British styles predominated. Despite its umbrous color it’s incredibly light and even juicy; perhaps no other beer gives lie to the notion that dark beers are inherently “heavier” than light brews (at 5.5%, it’s only marginally more alcoholic, i.e. caloric, than a Bud heavy). Insanely drinkable. (www.firestonewalker.com)

The Downingtown, PA makers of Prima Pils (a game changer for American pilsners) stepped into the dark and bitter fray with this elixir also known as Twilight, which, pushing 9%abv, is quite a lot bigger than similarly categorized brews. But like almost all of Victory’s offerings, Yakima Glory does it with uncommon finesse. It’s a beautiful tango of floral Yakima Valley (WA) hops and brawny, roasted malts. (www.victorybeer.com)

Japanese megabrewer Sapporo first developed the Sorachi Ace hop, a hybrid of German and Czech varieties, back in 1998, and it’s the only hop in Brooklyn's Sorachi Ace beer. Unlike many farmhouse and saison beers, which traditionally downplay super hoppy aromas in favor of a wheaty, yeasty bite, brewmaster Garrett Oliver’s version catapults the senses to an unexpected destination: Thailand, because of the hops' uncanny olfactory resemblance to lemongrass. Terrific stuff. (www.brooklynbrewery.com)

The ‘orouboros’ symbol in mythology—a snake or dragon eating its own tail—signifies renewal; let’s hope this Waterbury, Vermont operation continues to remake this incredibly floral, grapefruity IPA until every beer lover in America can try it. It’s citrusy and abundant, a marvel of restraint and refreshment (www.alchemistbeer.com)

Sour beers, made acidic through the use of barrel aging with wild airborne yeasts and (harmless) bacteria, grew in popularity throughout the year, even meriting a new bar dedicated entirely to the style, in Portland, Oregon (where else?). The fifth in a series of one-off, barrel-aged brews, Quinquepartite (Latin for "five parts") is blended from ales aged in Port, Chardonnay, Zinfandel and a pair of Cabernet barrels. Like many of the latest barrel-aged beers, this was a tiny allotment that sold out quickly, disappearing practically overnight into the gullets and beer cellars of hard-core collectors. (www.averybrewing.com)

In honor of the 40th anniversary of Miles Davis’ landmark fusion jazz recording, the Milton, Delaware-based Dogfish Head crew, headed by newly-minted Discovery Channel host Sam Calagione, threw together a shibboleth of a stout with African gesho root and jars of honey so raw there were still dead bees mired in the honeycomb. It made for entertaining television and even better beer, and it featured the year’s best beer label, too. (www.dogfish.com)

Another widely emerging beer variety in 2010—along with India Black Ales and sour and barrel aged beers—was the American-style IPA, a big, malty, juicy hop bomb of a style that originated commercially with Russian River brewmaster Vinnie Cilurzo while he worked for Blind Pig brewing in Temecula, CA. Along with another excellent commercial version, Sierras Torpedo IPA, the homegrown style finally found its place across the entire country after years of insider-only appreciation. There may be no better accompaniment to pepperoni pizza, ever. (www.newbelgium.com)

Merely naming the Belgian Trappist ale Orval is enough, in some corners of the world, to forever vouchsafe a craft beer lover’s bona fides. While its quality has shifted minutely over time (a matter of continuous debate) the orangey-hued pale ale is so iconic, so beloved, and so widely imitated that one Philadelphia beer bar, Local 44, refuses to carry any other beer in the bottle. So when Orval’s brew master Jean-Marie Rock agreed to collaborate with Kansas City’s Boulevard on a new American craft beer, the beer world waited with baited breath. The result? A grainy, straw-blonde lager with ample citrusy hops and a peppery finish, it was a bold, delicious experiment. (www.boulevard.com)