Share All sharing options for: The New Rules of Beer: Dark Lagers 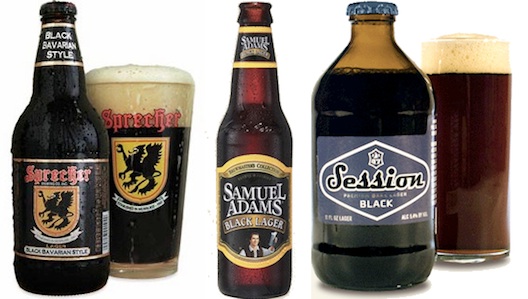 Everything you thought you knew about beer is wrong! In the past several years the craft beer world has continued to evolve and innovate with blinding speed. Old cultural assumptions about beer have outlived their welcome. It’s time to learn The New Rules of Beer. Here's lesson #1:

A beer's 'weight' is primarily a reflection of its dryness. How many fermentable sugars went in (in the form of barley malt and sometimes other additions like maize, wheat, Belgian brewing sugars, and other starches) and how much of those remain post-fermentation. Just as in winemaking, it's primarily an acid/sugar balance thing and has nothing to do with color, which is simply a reflection of how pale or how roasted the brewer's grains are to begin with. (Bitterness is another misunderstood facet often confused with weight; I'll get to that later.)

Color in beer is misleading in both ales and lagers in fact. Guinness Stout—to name just one dark brew consistently dismissed as engine oil by novices—is a actually a light-bodied, low-alcohol ale of around 4.2 to 5.0%ABV, depending on the version you're drinking. Blame decades of American corporate mass marketing for the preponderance of bland, fizzy yellow lagers here and a resulting mistrust of dark brews, an ancient art to be embraced, not feared.

A disclaimer: it's worth acknowledging that, in their eagerness to swing for the parking lot, a few early American craft brews were syrupy, under-attenuated, lacking fizz. "Heavy." A lack of carbonation can make a beer seem weightier than it really is, and vice versa (Belgium's Duvel is a perfect illustration of a heavier golden brew being devilishly light on the tongue). But today's more sophisticated American craft brewers have raised their game, taking on dark beer styles with a light touch. Known as tmave in Bohemia (the modern Czech Republic and environs) and schwarzbier in southern Germany, black lagers range from mahogany brown to a full-bore coal and gain their color and a lot of flavor from roasted malts, all the while keeping a light "body": low alcohol (around 5%) and a lean mouthfeel. Well made, they're dry, refreshing brews.

Some of the best examples in the U.S. include Sam Adams Black Lager, at 4.9%, and Full Sail of Oregon's Session Black Lager (5.4%), which has the added benefit of being sold in a grenade-shaped bottle. Then there's Wisconsin's Sprecher Black Bavarian (6%), which has been deservedly racking up awards for years. It's light, refreshing, and yes, jet-black. Now the black malt craze is spreading to other traditionally pale styles, too. Don't be surprised when you see a Black IPA (a.k.a. India Black Ale, or Cascadia Dark Ale) at the supermarket; even Black Saisons and Pilsners are turning up, with some impressive results. The famous Guinness ad said it best: 'Don't be afraid of the dark.'