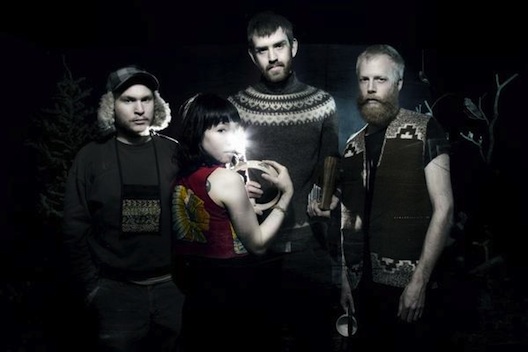 Little Dragon is a Swedish band specializing in smooth genre-defying electro jams. Though the group is only four years old, they've collaborated with the likes of TV on the Radio and Gorillaz, recently hitting the road for a worldwide Gorillaz tour. The soulful track "Twice" off their sophomore album also landed on Grey's Anatomy and made them one of Beyond Race Magazine's "Top 50 Emerging Artists." I caught up with the lead singer, Yukimi, and bassist, Frederik, to discuss vegetarianism and the group's love of Thai food.

I hear most of you are vegetarian? What prompted you to go the way of the veg?
Yukumi: I think it's because we all think its a big waste of energy to eat meat all the time. We think of it as a way of contributing instead of exhausting animal resources of the planet.
Frederik: Also I think that seeing the reality of the industry and ethical aspects of other creatures' suffering has an influence.

Do you guys follow any other alternative food movements?
Yukumi: Not really, but we definitely go for the organic, locally-grown options if available and we enjoy raw food restaurants every once in a while?especially raw desserts — they can be really heavenly!

Does this make it difficult to eat when touring the all over the world?
Yukumi: Sometimes it's hard to find good food on tour. But Thai food seems to be quite easy to find in many cities so we usually go for Thai.

How do you guys usually make food discoveries on tour?
Yukumi: Sometimes we just look up vegetarian, Thai food or Vietnamese places online and try to find the good places. But a lot of time the promoters will often recommend us the special secret spots.

Yukimi, you are half Japanese and half Swedish. What kind of food did you grow up eating?
Yukumi: A mix — but really a lot of Japanese-style food. My mom was a bit of a hippie so she would bake a lot of rye bread and crazy stews, my dad made mostly Japanese and Asian fusion. There were so many Japanese ingredients that were hard to find in Sweden so being creative was the only solution.

Do you have any traditional Swedish foods you crave when you're touring away from home?
Yukumi: The hard crisp-bread with Swedish cheese!

Is there much Thai in Sweden?
Yukumi: Not that much and the quality is usually pretty bad. Just too much coconut all over the place!

When you can find good Thai, what are your regular orders?
Yukumi: Pad Khe Mow (drunken noodles), Green Curry and all of the above with tofu, of course.

There is a lot of great Thai food in the U.S., what are some of your favorite spots you've hit on tour?
Yukumi: We just recently went to this Thai place in L.A. called Jitlada. They had this crispy papaya salad that just blew our minds!

You all just completed a tour with The Gorillaz, what would you say your best meal or food experience was on that tour?
Yukumi:They brought chefs on the road and made such amazing food! They also had a juice machine with a mountain of fresh vegetables and fruits. So we pretty much hung out around that machine a lot. They had a great mix of healthy and tasty food, from pecan pancakes to black bean burgers and awesome soups.
Frederik: They also made a yummy pumpkin ginger soup with cilantro. Was definitely a test of character every day having three different dessert options for each show.

On the flipside, where was your worst food experience on tour?
Yukumi: Definitely the Pad Kee Mao we tried in Dublin? it was very bad. We once got this tuna salad in France that the restaurant must have kept out of the fridge the whole day because it made half of the band very very sick.

What are your favorite U.S. cities to tour in because of the food? Where do you usually go ?
Yukumi: California and the rest of the West Coast is great for all the Asian food and there's nice pizza in New York for sure!

Do you guys have a regular drink/cocktail on tour?
Yukumi: The Mojito, sometimes even without the spirits. But we do whiskey or rum before shows.

That said, do you have a go-to hangover cure food?
Yukumi: Some of the band (the meat eaters) will go for hamburgers. The rest of us will just chew on ginger the whole day.

Do you ever eat fast food when you're touring in the U.S.?
Yukumi: Usually we'll get a pizza slice after the show, which is nice. But we haven't really picked up all the franchise names yet - usually if it's a place we order regularly, it'll be rice and beans from Taco Bell.

If you could describe your music as a meal or food, what would it be?
Yukumi: Hmmm?a nicely cooked, free-range, organic, local egg!

Now for your top picks in the US!

The Gorillaz and Little Dragon performing "Empire Ants" on Letterman