Share All sharing options for: Mimi Sheraton on Bestavores, Brooklyn, and Bygones 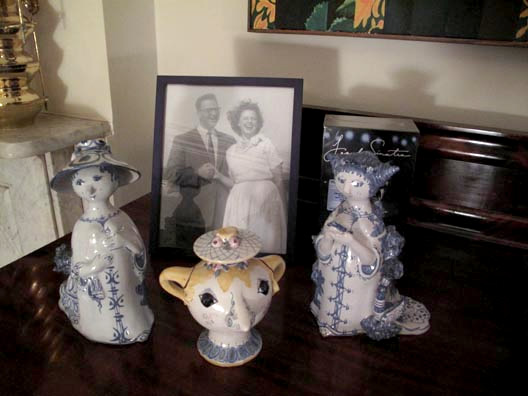 A photograph of Mimi Sheraton and her husband, Richard Falcone, on their wedding day...in Sag Harbor [Photo: Joshua David Stein/Eater.com]

Mimi Sheraton lives in a beautiful town house in the West Village, filled with modernist furniture and mementos from her world travels. In the living room, an Eero Saarinen chair with a wool blanket from Shannon, Ireland on a carpet she picked up from Egypt. She and her husband have lived there for 45 years during which time Ms. Sheraton has built a reputation as a blunt, insightful and deeply knowledgeable food writer. She was the New York Times restaurant critic from 1975 to 1983. Much in the news of late, due to her unusually (and refreshingly) impolitic comments about Brooklyn, I stopped by on a recent frigid afternoon to chat.

Mimi Sheraton: Where do you live?
JDS: In Williamsburg.
Oh, you're one of the Brooklyn people. I was born in Brooklyn. I don't hate it. I'm just not going to go on a subway and stand on line in a restaurant. I'm not going to stand on line in a restaurant in Greenwich Village. Every thing went beyond my meaning. It takes something really special to get me above 23rd street. I've been to 125th and Lenox Avenue three times in the last two weeks to try Red Rooster. The food is good; the scene is terrific and it's very easy to get to.

I was quite amazed with that whole brouhaha last week that the people at the Times answered. I thought, "New York Times, you are supposed to be hors de combat. But every one of them tweeted. Sam Sifton even referred to it on the Diner's Journal. I thought, "Well, they don't know that the best thing is to make believe you never heard the whole thing."

One doesn't often read restaurant reviews from the past. There is a marked different between your style of reviewing and Sam Sifton's.
Well, my era of reviewing. Everyone — Craig [Claiborne] and the three who were between Craig and me, and even Bryan Miller, to some extent William Grimes — more or less followed in that tradition. There was always one critic who wrote independently and had his newsletter who did this long kind of thing. He was quite wonderful. He was very biting, very acerbic. His name was Seymour Britchky. He always put out a long critique of the clientele. But it was always very interesting, not twerpy or not with allusions to make himself look like he's with it.

But more even than the tone, reading your reviews from the Times, one feels perhaps they're much more historic than they actually are. Restaurants open and close at such a frenetic pace and most of the restaurants you wrote about are gone. You wrote, for example, a lovely review of Le Cygne.
Well, the chef from Le Cygne is now at L'Absinthe so he's existing in a different way. You know, a critic has to play with the cards he or she is dealt. If you're a theater critic you review the plays that are opening. If you're a restaurant critic, you do the same. At that time there was a lot of French but there was a whole new era of Italian, Chinese, and to a smaller extent, Indian restaurants opening. In the late 60s, after the 1964 World's Fair, we began to see the Northern cuisine of these countries. Not the Neapolitan or Sicilian but Tuscan, Milanese, Piedmontese. We got the Moghul and Tandoori cooking from Indian. Before that, it was all curries and murky little corners. Chinese was all Cantonese until suddenly there was Szechuan and Hunan and Nixon went to China and Chinese chefs began to come here. I thought it was very funny that it's always the North that has the better accent and is richer with more sophisticated cuisine. After the Italian Pavilion, there were a whole bunch of Italian restaurants nobody knew.

Do you think you were a critic during a particularly fruitful period in the city's culinary history?
I would say it was fortunate to be post-war when people were discovering things. But I don't think it is any richer than it is now. I think there is very rich material to deal with: the Asian thing, the Latino, the fusions. I think it is a little hotter now. You have to be right there with the newest thing, quickly. Each chef has to outdo the other.

I do think there were fewer what I would call corporate restaurants. A chef had one restaurant. Maybe a company like Restaurant Associates had many but they had a chef and a manager in each one. To have many restaurants the way Danny Meyer does is very different than the way Jean-Georges Vongerichten or Daniel Boulud do. They are the chefs. Danny is essentially a manager. I think Boulud and Jean-Georges do it very well.

I respect Le Grenouille very much, no matter what chef the have. That is an owner's restaurant. Charles Masson deserves a lot of credit. And the Coach House, I'm pointing to that painting of a watermelon because it came from The Coach House, which was one of a kind and marvelous. When [owner] Leon [Lianide] died, his widow said, "Please come and pick something out. You've been so kind to us over the years." It was where Babbo is now.

As long as I've been in the city, Babbo has been there. But I imagine that when you've seen restaurants come and go as much as you have, you look at a space and it is a palimpsest.
I see this whole city as a double-exposed photograph. In the case of that space I even see it as Helen Lane, which is what it was before it was the Coach House, when I was going to NYU in the 1940s.

Do you ever feel wistful about all the restaurants that have blinkered and been snuffed out?
Do you mean do I miss any restaurants that are gone? I miss Sea Fare of the Aegean very much. It was a fabulous seafood restaurant. Nothing has replaced that. It was where Beacon is now.

I don't mean miss as much. You spent a great deal of time writing about restaurants and thinking about restaurants and describing the interplay of flavors in dishes. But these dishes no longer exist, only the reviews remain.
I just reported on what I had that mind. There are kinds of restaurants I miss, the old New York seafood restaurant. And there's a certain kind of civility that I miss. I in general dislike the lack of dress codes in certain places on a certain levels. Not because I think every man has to wear a tie but the problem if you don't have a dress code, people come in looking like slobs. It's a sign for respect. But I think we have so many things now that we didn't have then to bemoan what we lost is almost being ungrateful.

Okay, what are some of the things you're excited about?
South-east Asian cuisine. I miss French bistros very very much. But I think the level of ingredients in all restaurants is enormously improved.

Do you see a temptation with this panoply of ingredients, leading toward a more obscure yet better approach to ingredients?
I think there has been some of that. Fennel pollen amuses me. If it tastes good, then that's fine. I'm not a total locavore. I'll say that. I consider myself a bestovore. Nevermind local if it is not the best. But if I were faced with a Pennsylvania peach or Georgia peach, I would take the Georgia peach every time and let them sort it out in Pennsylvania. I think the locavores should stay home, that they shouldn't fly back and forth, especially from California making big carbon footprints in the sky to speak to us about the importance of being local.

I have a plan that they should never travel farther than they can go without the use of outside power. They can skate, bike, sail, walk, horse ride. Otherwise they should stay home. Certain of them whom I won't mention probably cross the continent six to eight times a year. Locavores should stay in walking distance.