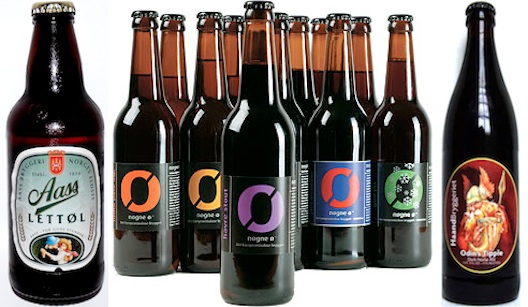 Cold weather is beer weather. Take it from Norway: the icy Scandinavian land is white hot for beer, thanks to age-old Aass and newcomers Nøgne Ø and Haandbryggeriet. It all goes back to the Vikings, who wrote about brewing 'aul' (a cognate of the word 'ale') in their 12th century epics and how it tended make them go a little bersërkr. An ancient rural home brewing industry still thrives, thanks to the country's strict, high-tax, alcohol-averse government. Farmers were long required to brew, and if they failed in their obligations, the king and church first seized and then divided their land. Even now it's said to be a Norwegian country custom to brew the beer for your own funeral, to really go out in style. Here, three reasons why Norway is buzzing in the craft beer world.

- Norway's oldest surviving brewery, Aass (pronounced something between 'Orse' and 'Ohs'), dates to the 1830s and produces a strong, smooth bøkkol, or bock, that is creamy and delicious, as well as Juleøl Premium, a ruddy-red winter beer weighing in at a hefty but drinkable 9%ABV. Classic bottle art, too.

- Nøgne Ø, which dubs itself Det Kompromissløse Bryggeri, or 'The Uncompromising Brewery', is a new-school micro specializing in new-school British, Belgian, and American styles, and takes its name ("Naked Island") from 19th century Norwegian literary icon Henrik Ibsen's description of the desolate coastline near Grimstad. There the brewery produces a range of aggressively malty and hoppy beers including the roasty God Jul, a fulsom, 8.5% winter ale, and the Dark Horizon series, a kooky-strong stout made with English malt, Pacific Rim hops, Canadian yeast, and coffee from Colombia. At around 16%ABV, it's big, boozy, and exceedingly rare. Openly influenced by the unhinged formulations of America's craft brewers, Nøgne Ø brews confidently across styles, from saison to tripels and even West Coast IPAs.

- Housed in a former horse stable and hosiery factory, HaandBryggeriet (as in 'brewed by hand') is a four-man operation impressively dedicated to resurrecting ancient indigenous styles. For example, Norwegian Wood, a reddish, 6.5% ale, is made according to a local tradition pre-dating the use of hops for spicing beer: the brewers utilize juniper branches (with berries intact, and picked by hand "in all weathers"), imparting a pleasing piney zing. Traditionally barley malt was home-kilned over open fires, giving the brews a smokey taste; Haand's base malts, from Germany, are seasoned over beechwood fires. Recently the four Norsemen have concocted Akevitt Porter, a brew aged in Akevitt (Aquavit) barrels and Valhalla, a strong ale brewed with Turkish figs and wild yeasts. Another Haand rarity worth seeking out is Odin's Tipple, a complex, viscous strong ale (9%abv) made with roasted and chocolate malt and wild yeasts. The color? None more black.