Calling it a "misfortune," today on the Martha Stewart Show, domestic doyenne Martha Stewart explained the nine stitches on her upper lip: she startled one of her dogs and then... she ended up going to the emergency room. She said:

I was rushing to New York at 9 o'clock at night leaving my home... And my little dogs were all a little upset with me — they had been lonely — and it was dark in the kitchen and they were asleep and I wanted to say goodbye to the them, so I went bending over one of my little doggies, and BANG! I startled her and I ended up in the hospital with a slit lip and I had nine stitches. And here I am in the hospital...

And what would an almighty CEO/television show host do in such a situation? Cancel the show, take some time off, get some plastic surgery, and then go into hiding, right? Nope. Stewart went on the air and shared some pretty graphic photos of her at the emergency room. She promised to post them on her blog later today.

Update: Her description and photos are now up on her blog but the server appears to be under some strain. She described the incident:

As I leaned down to whisper goodbye to a dozing Francesca, I must have startled her, because she bolted upright with such force that she hit me in the face like a boxing glove hitting an opponent’s face. I was entirely startled and my neck snapped back. I felt a bit of whiplash as blood gushed forth from my split lip. Frannie was as upset as I was and cowered in her bed. 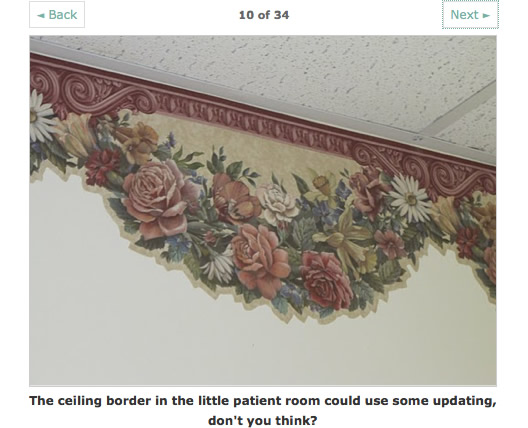