Top Chef All-Stars Episode 6: Life's a Beach and Then You Fry

Share All sharing options for: Top Chef All-Stars Episode 6: Life's a Beach and Then You Fry 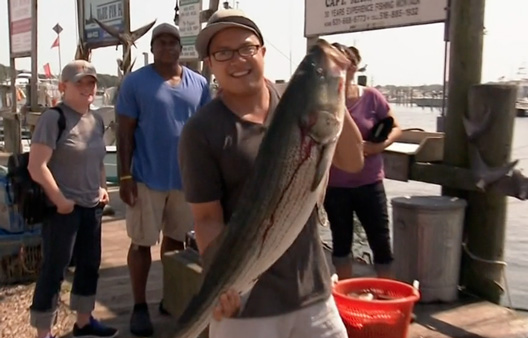 A note before we start: congrats to the Top Chef team for straight killing it in the blogger-friendly episode title department this season. (That is a real department.) Last night's episode was called "We're Gonna Need a Bigger Boat," and "Dim Sum Lose Sum" was the previous week's title. Bravo, you are lobbing me meatballs here! Not that lobbing meatballs makes it any easier for me to hit a home run. I don't know if you guys have ever swung a bat against a meatball, but the meatball explodes. It is a messy, unfortunate waste, like Jamie.

We open with Dale, Marcel and Tre getting roof drunk at One Brooklyn Place. Marcel is acting VERY stupid. I know at this point I am the boy who cried how stupid the wolf is, but it is almost crazy how annoying he's able to be when he's drunk. He accuses Dale of cheating by only preparing proper plates for the judges during the dim sum challenge. Dale takes deep breaths and keeps his anger in check. Tre says, "Marcel is kind of an asshole." Kind of? He's the main kind. Marcel is kind of an asshole like Fabio is kind of Italian. Marcel then kind of drinks straight from a Bombay Sapphire bottle.

After waking up at the crack of bullshit, the chefs find a Gone Fishin' sign and no Padma in the kitchen. Obviously Padma is not getting up this early. Whenever there is an early call it tends to be Tom doing the waking. Padma is not a morning person, just like she's not a not-slurring-her-words person. It takes all kinds! 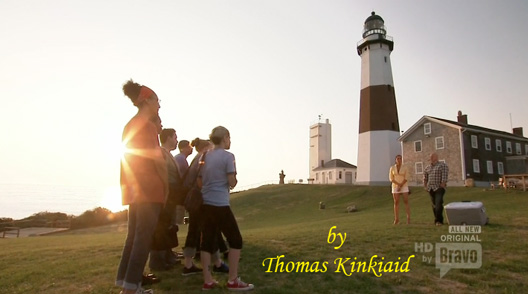 The chefs are going fishing. They head into a sponsored vehicle and drive out to a lighthouse on Montauk Point. Padma and Tom are waiting. No Quickfire this week, just a double Elimination Challenge. They've got to head out into the water, catch their own fish, and cook it for a huge beach party. 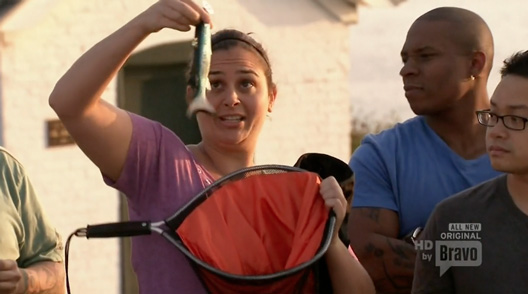 It's a team challenge again, and they pick fish numbers out of nets. Fish numbers out of nets? Come on, show, who cares. That is such a pointless thing. Is that fun for literally anyone? Picking teams is already a boring and suspense-free portion of each episode, on par with SHOPPING TIME, and involving thematic props does not help one bit. A prop master had to spend half his day making those for four seconds of screen time, that no one in the universe could ever enjoy. "Oo, that's so fun. The numbers are on the fishes and fishes are what this challenge is about. I like that." A million dollars if you can find me someone who says that.

The four teams split up onto two boats, the Susie E. II and the Sea Wife IV. That captain is on his fourth Sea Wife? He is the Larry King of boat wives. Topical! Angelo is worried about sharks. Because of the movie Jaws? That movie came out a long time ago, He says, "I don't even go in the pools because this whole shark thing has affected my mind." The pools? Whole shark thing? What in the world are you talking about, you crazy spy? "I think I am mostly afraid of sharks because sometimes when I get captured, during my um not-spying, evil geniuses threaten to lower me into pools filled with hungry sharks. Like all Americans, I hate that!"

Everybody's got five hours to catch a whole bunch of fish. There are a few ringers. Fabio's dad was on the Italian national fishing team, which I think we can all agree is a very famous team we already know a lot about. Dale fished a lot with his dad, an "angler." Dale and his fishing is something we'll hear a lot about this episode.

After three pulls on his rod (am I right), Dale immediately gets a bite. He pulls in a big one. Then Antonia gets one. She screams and dances a lot. Girls just wanna have boat fun.

This trend continues, as the two teams on Sea Wife IV (Dale, Carla and Tre & Tiffany F., Jamie and Antonia) catch lots of fish, high five, and have fun. The teams on Susie E. II (Blais, Fab and Marcel & Tiffany D., Angelo and Mike) struggle and catch nothing. Is it their technique? The Sea Wife IV captain taught his anglers a special technique. "Don't pay attention to what the other boats are doing." I think he's right. Susie E. II's fishers have a very weird technique. A total three man clown circus. 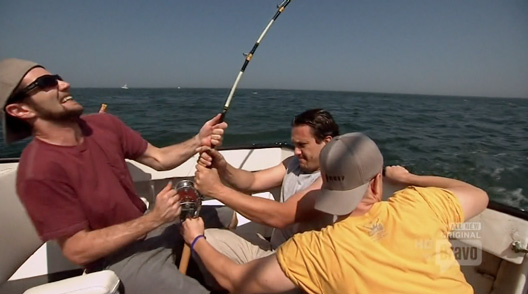 Eventually everybody catches some fish. Dale catches a VERY big fish. Catch of a lifetime! I guess. Kind of a boring lifetime? "One time a fish was huge." Clearly I am pulling an Antonia. I don't really "understand" fishing. But Dale is very proud and so his dad would be too and enough already. It is one of the best days he's ever had.

The teams head to the market. This is Tom's ideal dinner: catching a fish, picking up what's fresh on your way home, and serving it. Tom's ideal dinner is for 200 strangers on-camera? Neat. Jamie says, "This is back to basics. This is the way I like to cook." What? As in, basically you like to not cook anything ever? Fab and Blais play grab ass. They are now boyfriend-girlfriend. Angelo hits MIke in the nuts.

The chefs land on Water Taxi Beach, up in Queens, and get prepping. Only Fabio, Marcel and Blais have decided to team up on one dish. It is risky! Blais thinks he's playing Marcel by letting Marcel believe he is in charge, but if you are letting him be in charge, I'm not sure what the difference is. Fabio is secretly on board with the plan, and takes a back seat in the cooking, because he thinks if they are on bottom the Judges will have a hard time picking him to go home. That strategy doesn't seem wise, Fabio! I feel like your grandmother would have had a saying about this.

Tom shows up and lays down some legendary undermining. "You guys are hanging everything on one dish? You didn't make your own tortillas? Bluefish, huh? Cool." Psychological warfare.

Guests arrive, and as fun as everything looks, I have to say that definitely this is when the season started to wear on me. These guys being "All-Stars," we've seen it all before. And it's striking to have people asking Tiffany if she took her honeymoon yet and Carla-fans hootie-hooing away. We've already done this. As much as I was happy to not have to meet new people this season, I regret that joy. I regret it! I am ready for the finale. We have so many weeks left. Let's try some triple-elimination episodes.

The chefs serve their dishes. Everyone thinks they did great. At the end of service, Blais is talking trash about how poorly Jamie cooked her fish. The skin stuck to the pan! Oh, Jamie, you are terrible. Jamie gossips that Marfablais's dish was a cop out because they only cooked one thing. You are calling what they cooked a cop out? That is like the pot telling the kettle that the kettle rarely cooks anything and has a terrible voice and personality. Also Mike and Angelo sexually harass a guest. Nice!

In the Trash Closet, Padma calls in Carla, Dale, Tre, Mike, Angelo, and Tiffany D. Things remain tense, as no team has a clear idea of who is on top and who is on bottom. As the six chefs file in before the judges, Mike looks like he's gonna cry. Dry those peepers, Isabella, you six are on top. The judges' favorite this week: Carla's crazy New York-inspired smoked bluefish lettuce wrap with pumpernickel croutons. It looked really good! Carla wins a trip to Amsterdam and she is very happy. "It's me, again!"

Back in the closet, the other six don't share in Carla's celebrating. It means they are on the bottom. They head in to face their fates. Poor Antonia. She went out on a limb and made a fried porgy po' boy, and Tom tells her that if not for Jamie and Tiffani she'd be going to Amsterdam. It was his favorite. Congrats! You have shitty teammates. Jamie's fish thing was watery and terrible, and she ruined the skin. Tiffani didn't take the blood line out of her bluefish, and because of that it was fishy. Meanwhile, Team Marfablais made a much too complicated dish. They should have made a better dish, or more dishes. Fabio gets called out for not really contributing. Could that send him home? Not this week. God smiles on us all, and Tiffani and Jamie pack their bags. Jamie, good luck in life. I hope you're President one day. Next week: Restaurant Wars, and everyone dies because war is Hell.