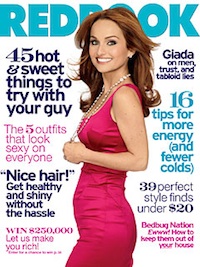 Despite having a multifaceted career in television and print, Food Network host and cookbook author Giada De Laurentiis tells Redbook she tries to downplay her success at home because "I think it can be hard for any man to sometimes be upstaged by his wife." Thus, she emulates traditional gender roles: "When I'm home, I work very hard to be [husband Todd Thompson's] wife and [daughter] Jade's mother. I have no problem going back to those traditional roles." Thompson, it should be mentioned, is fairly successful himself: he's a clothing designer and has worked for retail chain Anthropologie.

Then she gives a bit of old school relationship advice, saying "All men want to be treated like kings in a relationship" and saying that if women don't "indulge" in that aspect of the male persona, "their men are likely to stray." So, let's get this straight: women should hide their success around men, and if they don't, they only have themselves to blame if men cheat on them?