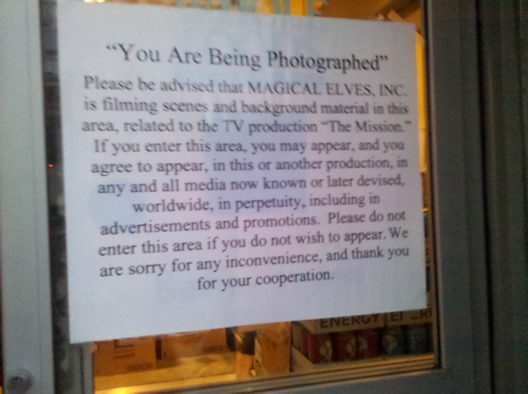 When we heard that Top Chef All-Stars was shooting last night at the Bowery Whole Foods in New York City, we sent our crack team of expert Eater operatives to swarm the store. Thwarted by the production team who tried to stop any sort of photography, our team was told that they were shooting "some kind of special" or a Whole Foods commercial. But our people knew better.

The above photo was taken from the outside of the store: a sign warning shoppers that a Magical Elves television production called "The Mission" was being recorded.

Reported one operative: "Dale [Talde] was talking to himself A LOT, and was unhappy with the quality of prosciutto the deli counter had. Also, Angelo [Sosa] could not for the life of him, couldn't figure out how to find the check area out of the store until producers directed him (a few times.)"

And now, time for epic spoilers that possibly reveal the winner of the current season: 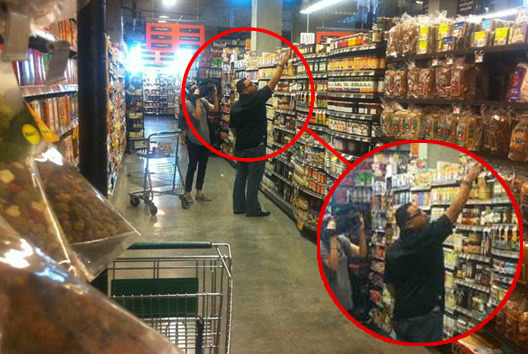 And more! Reported @decla who was at Whole Foods last night: "...just saw Dale, Andrew, Angelo, and that Italian guy." So we also add twitchy season four contestant Andrew D'Ambrosi to the list.

That "Italian guy" we assume is Fabio Viviani, but you already knew that. Reported yet another operative, "Fabio, by the way, looked great, and his hair is grown out."

By Terri Ciccone and Eater Video