Top Chef D.C. Episode 13: It Ain't Over Until The Fat Lady Singapore (What?)

Share All sharing options for: Top Chef D.C. Episode 13: It Ain't Over Until The Fat Lady Singapore (What?) 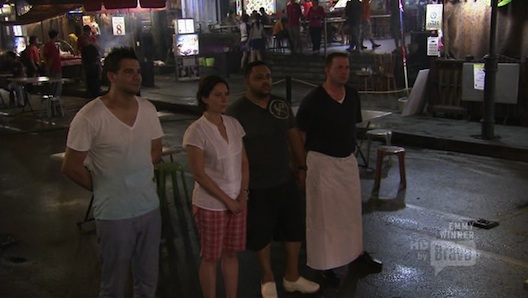 Oh how my DVR teases me. "Finale" the guide's description bragged. Is the season over? No. I wish. In my dreams! (I dream small.) Last night was part 1 (of only 2, thankfully) of the Top Chef D.C. wrap-up. Our four remaining chefs arrive in Singapore: Angelo The Spy, Ed the Bro, Kevin the Seven-Year-Old Boy Wearing A Fake Beard and Pretending to Be an Adult, and Kelly the One Who Is a Girl. They all run into each other at a Singapore food market in a very organic way. "Funny seeing you here!" It's crazy how real the moment feels. What good luck that cameras were around to catch these chefs crossing paths in a completely random and unpremeditated way. 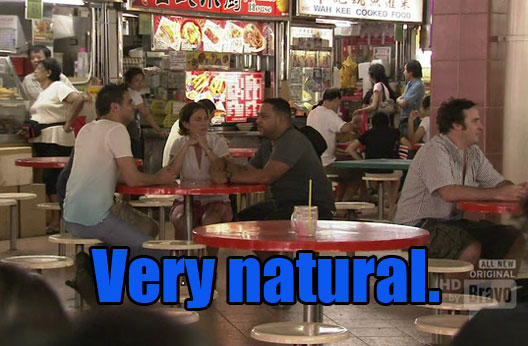 Kelly asks Ed, "How was your flight?" Ed says, "It was awesome." What sort of psycho says a 19-hour airplane ride is awesome? "It was fucking sick, bro. I crushed like two bags of gorp, then blew through the first three Twilight books on my Nook, then drank Brown Marys (Bloody Marys made with whiskey) until I passed out in my own drool listening to Incubus on my Zune. Then I woke up and there was still eleven more hours. Like I said, awesome." Ed so has a Nook. Angelo is wearing an outfit that is a head-to-toe gradient of white to blue and it is giving me a headache. Maybe it's hyper color? If you breathe on his shirt, it turns into a v-neck. Meanwhile, Kevin has a very silly hat on. 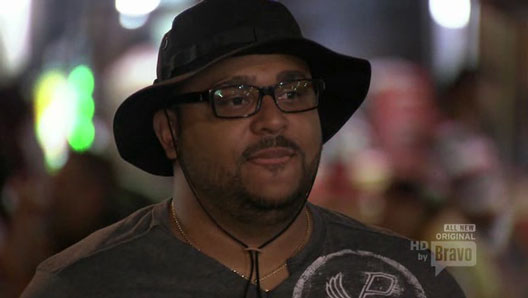 Tom introduces Seetoh, a local leading authority on the food of Singapore. Seetoh, who is very likable, leads the chefs on a tour of Singapore's world-famous food market. I believe he compares it to a prison? One chef in the market has been making the same noodle dish every day for forty years. That sounds like prison to me. (I saw the first three season of Oz, so I'm something of an expert.) As they sample food, Angelo asks Ed if he likes black cockles. Ed says, "Not as much you do." Good one, sweaty frat bro. "I pledged at Delta Gramma Blo." Kill yourself. The expression Ed's face makes throughout this entire episode seems like it'd be an arrestable offense in Singapore. Someone cane him, please.

They also get down on some chili crab that looks insanely good. I wish I could climb through my TV and eat what's on the screen, a feeling not even Padma has provoked in me for at least a few seasons. I do not feel the same way about the national dish of cold and gelatinized poached chicken with broth. Why is that their national dish? Get a better national dish, Singapore.

Anyway, what a fun night just hanging out in the market and sweating a ton. It's cool this show took a break from the breakneck pace of cooking and drama and challenges to bring us a leisurely tour through -- WHAT THE IT'S PADMA. Hi, Padma. It's Quickfire time, doy doy. The chefs have 30 minutes to cook a dish using only local ingredients, and only in a wok. Woks are so important in Southeast Asian kitchens that many cooks aren't allowed to handle them until they have 3-5 years on the line. Cool career. Also, the winner gets immunity! This is unprecedented in a finale Quickfire, but also this reality show does not deserve to get words like "unprecedented" thrown around near it.

Angelo is obviously a wokspert, and that intimidates Ed. There is a lot of everybody being nervous about how big an Asia-head Angelo is. Kelly is more scared of Kevin, because they cook similar food and when he brings it, he brings it. But Ed's got a wok at home, so he should be all set. "I wok it up every weekend." Is that a wok pun, Ed? Take a long wok off a short pier. (Tie the wok to your neck so you drown.)

Though he first intended to make chili crab, Angelo becomes overwhelmed by all the ingredients and switches into frog legs-gear. Oh boy, Angelo's head. Always a liability. He makes chili frog legs with pineapple and rambutan salsa. Kelly does Chinese noodles with lobster, cockles, bean sprouts, and Chinese broccoli. After tasting Kevin's seafood stew with lobster and cuttlefish, Padma asks if he's ever used a wok before. "No." She says, correctly, "What is wrong with you?" Kevin had what I imagine is months to study up for Singapore, and he focused on ingredients and not the wok. Ed serves stir fried noodles with black pepper sauce and lobster. A drunken Padma declares him the winner. "I now pronounce you awesome." Ed says awesome about forty times. Angelo basically begins crying and will not stop until the end of this episode. Ed's got immunity and that's just so awesome according to him. Angelo's alien tears begin to melt his brain. He slowly unravels. 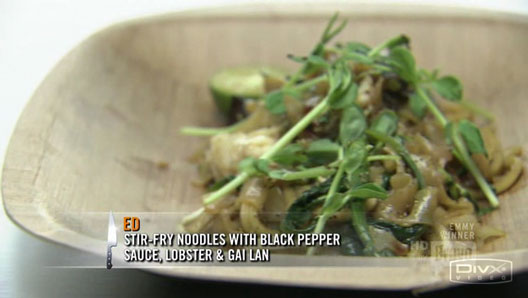 Immunity complicates things even more as we learn that tonight's elimination challenge is a team challenge. Will Ed throw the challenge? Does a bear named Ed sweat and slur his words in the woods? They must throw a dinner party for Food & Wine editor Dana Cowin and 80 of her closest strangers. They will be using all local stuff and everything must be made to order. Kevin will very much enjoy reminding us that the term for that is à la minute, which is awkward. Say "made to order." No one is impressed.

The chefs seem very lost in the grocery store. They don't know what anything is or tastes like. Kelly actually says to an employee, "I want to make a red curry. What are the spices I should use?" Yikes. Ed decides to do two dishes, despite everyone agreeing the night before to just do one, because growing up he had a learning disability. I'm not sure how that is related. Because he is bad at counting? He certainly acts like an idiot when he says the clerks have an abacus. He's a half-step from slapping it out of their hands and calling them nerds. He's the Karl Pilkington of Top Chef.

Back in the kitchen, the chefs have only an hour to prep before service and they scramble like mad-people. Ed, blessed with immunity, is making a point of being a really insufferable dick. He is being slow and mean in the kitchen and doing all he can to fuck with his competition, which is fine, except Ed thinks he's being funny. Ed's the sort of "funny guy" who doesn't say funny things but just lies a lot. He says, "I'm extremely sarcastic and people think I'm being a douche bag, and half the time I am." Aw, that glass is not half empty, Ed. It's completely full. It is in fact overflowing. We're gonna need a bigger glass!

Tom shows up and has no time for small talk. He tells the chefs he read the menu and can't believe they are only doing one dish each. It's Food & Wine, goddamit, you each should do two. He peaces out and all their minds explode, but not before Ed chirps, "I had always planned to do two, Chef!" Someone please cane him. The chefs scramble on the double to prepare two dishes in their allotted hour. Kelly struggles with a racist can opener that refuses to open Asian cans. It seems stressful! They all sweat a lot. Sweat is definitely a theme of this episode. Kelly slices her finger and it is a bleeder. A latex glove does not prevent her from having a very terrible time with the plastic wrap. 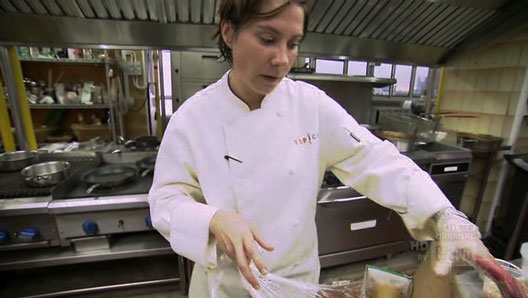 Some local servers sort of help the chefs deliver the food but also make it very difficult. At one point, a waiter actually writes the ticket up in Chinese, which is such an awesome fuck you. "Figure it out, you American dorks." That is what I hope he said in his mind. (In Chinese.) The chefs are serving to Gail, Padma, Seetoh, Tom, and Dana Cowin. They all really enjoy the meal! Tom takes a break from a season of smirking and cracks a lot of smiles. Ed's banana fritter makes him flip out. 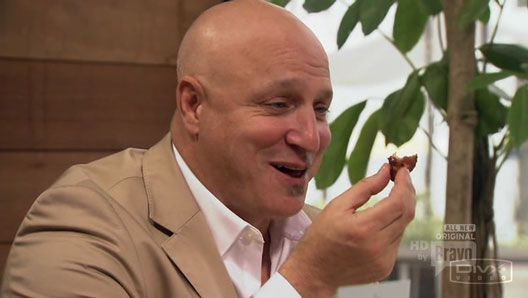 At judges table, we hear a run through of how successful everyone's dishes were. It is small little details that will separate the winner from the loser, and it's the best meal the judges have eaten all season. Angelo's spicy shrimp broth with ginger and prawn dumplings was comforting, but too salty. His lamb tartare with rambutan ceviche and curry oil, though, was a tremendous risk but extremely smooth and incredibly elegant. ("Extremely Smooth and Incredibly Elegant" is Jonathan Safran Foer's new line of ladies' shavers. ) The fish in Kelly's chilled cucumber soup had an odd texture, and the seared prawns in spicy red coconut curry could have used a bit more heat. Kevin made a Southeast Asian clam chowder and they all loved it. His 63 degree farm egg with pearl tapioca could have flopped but was executed perfectly.

Ed, despite his immunity, over-delivered. His sweet and sour pork with crispy rice and potato cakes tasted just like the market, and Dana would have a bottomless bowl of it. And his banana fritter with red chili paste? As mentioned above, Tom goes crazy for it. He says that if Ed put those in a truck in the East Village around midnight, he'd have stoners lining up. Tom loves weed! Gail says her only problem with the dish is that she got two balls instead of six. I bet, Gail. With nothing to lose, Ed wins. He is very happy. Angelo immediately begins weeping. 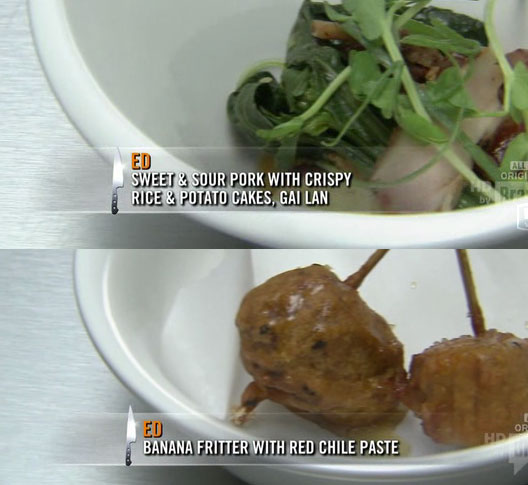 Angelo and Kelly both feel they are headed home. Angelo is a wreck. What a wreck! But I think we see where this is going. Kelly had two flawed dishes, and despite her solid performance all season, is heading home just shy of the real finale. A shame. I liked her! She thanks the judges and leaves gracefully. 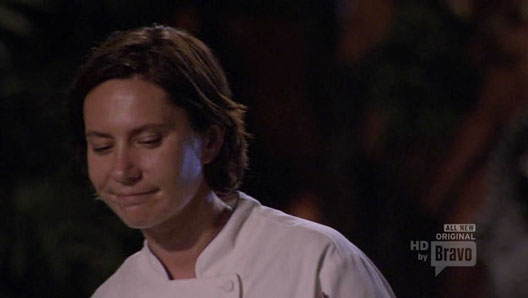 Angelo, though, weeps like a child. Get it together, kid. You are almost there. Though it looks like you get sick next week? Stop crying. 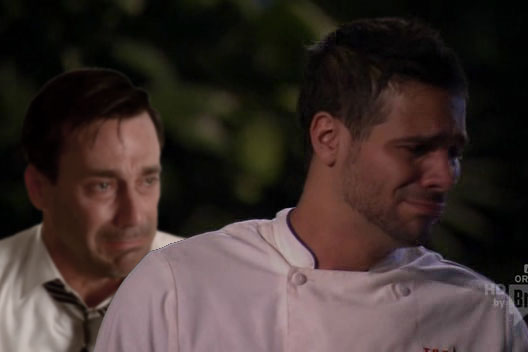