The Forum of the Twelve Caesars on Mad Men: The Oysters of Hercules, Which You With Sword Shall Carve

Share All sharing options for: The Forum of the Twelve Caesars on Mad Men: The Oysters of Hercules, Which You With Sword Shall Carve

On Sunday's episode of Mad Men, "The Suitcase," Peggy Olson stayed late at work and missed a birthday dinner with her boyfriend and family at the restaurant The Forum of the Twelve Caesars.

Located in the ground floor of the United States Rubber Building at 57 W. 48th St in Rockefeller Center (currently the home of AJ Maxwell's Steakhouse), the Forum opened at the end of 1957. It was the creation of Joseph Baum and Jerome Brody of Restaurant Associates, restaurateurs who were also responsible for The Hawaiian Room, The Rainbow Room, La Fonda Del Sol, The Four Seasons and Tavern on the Green (Baum would later separately develop Windows on the World in 1976, while Brody went on to revive The Oyster Bar and Gallagher's steakhouse).

The Forum, which was said to have cost $600,000 to build ($4.66 million in 2010 dollars), was modeled on Imperial Rome and featured mosaics with gladiators, waiters in purple velvet jackets, and bartenders that wore leather jerkins "of authentically Roman cut."

Opulent and epic, the restaurant also sported enormous menus with wax seals, sterling silver wine buckets in the shape of centurion helmets, and, according to Mimi Sheraton's 2004 book Eating My Words: An Appetite For Life (Buy at Amazon

), bronze dolphin water taps in the restroom. In Appetite City: A Culinary History of New York (Buy at Amazon

), William Grimes described Italian custom-made knives with the head of Bacchus in the handle.

And the theatrics! So many items on the menu were flambéed that Baum once boasted to have "built an extra ten-per-cent capacity into the air conditioning system." Sheraton herself experienced the "exuberant pyrotechnics" and "feared the whole room might combust." It did not.

The Forum was named after The Twelve Caesars, a set of twelve biographies of Julius Caesar and the first 11 emperors of the Roman Empire that remains a primary source on Roman history. The interior was designed by William Pahlmann, an interior decorator who used as inspiration portraits of 12 Roman emperors found in an antique shop. Theme restaurants were nothing new, however (see the Times Square Murray's Roman Gardens which opened in 1908).

After traveling to Rome, Pompeii, and Herculaneum, Baum and Brody were inspired. They studied the works of Apicius, author of the collection of Roman recipes dated to around the 4th century AD, were briefed on Roman culture by a professor at Yale, and had a classics professor lecture their staff.

In a December 21, 1957 New Yorker piece "Gastronomic Tour," Baum explained the thinking behind the restaurant: "Thematically, we're ancient Rome — the golden age of Rome, a time of lusty elegance, with a feeling in great measure like that of New York today, in which the good things of life are presented to the leaders of the world."

The menu (see the above slideshow) was of course bombastic and ludicrous, featuring headings such as SUMPTUOUS DISHES FROM ALL THE EMPIRE that had "Sirloin in Red Wine, Marrow and Onion - A Gallic Recipe JULIUS Collected While There on Business" and EPICUREAN TROPHIES OF THE HUNT that included "Epigrams of Venison Sauteed with Truffle and SAUCE VITAE." One would also find "Broiled Three Clawed Lobster" ($5.75), THE NOBLEST CAESAR [SALAD] OF THEM ALL ($2.50), and birds "BAKED IN CLAY, UNDER THE FIERY ASHES."

There was also the enormous OYSTERS OF HERCULES "Which You With Sword Will Carve" ($1.65) and "THE GREAT FORUM ARTICHOKE, Filled with a Puree of Oysters" ($1.65) which apparently Peggy's mother ordered (see the top-most slideshow).

A note at the bottom of the menu bemoaned the unavailability of rare birds: "Since the local 'Sumptuous Laws' have limited the netting of the Pink Flamingo, Lark, Thrush, etcetera — more than the usual number of days are required for out netmen to accomplish their task," but offered as a consolation "'the noble Peacock" as "our ARMIGERIUS and his kitcheners stand ready with one of the most delightful recipes of their ARS COQUINARIA."

Craig Claiborne, then the New York Times critic, wrote on January 6, 1958 soon after the restaurant's opening of its "lusty elegance." He was a fan: "The service is superb, the food is opulent and it is priced to match."

Gael Greene wrote a review for New York magazine (scroll down a bit) of the Forum much later, in November 1970. She reported that, sadly, the "room has not worn well." She described the menu as "quite extraordinary, with depth and imagination almost never encountered in the town's French smuggeries," but found fault with the food. "[T]he cutlet of wild boar might well have been slain for some early Caesar and left to tenderize in its marinade for some centuries," she wrote. Also it was expensive! A three-course lunch for two cost $50 ($280 in 2010 dollars). Greene concluded, "The Forum's excesses are clearly a mirror of our own. Mea culpa." 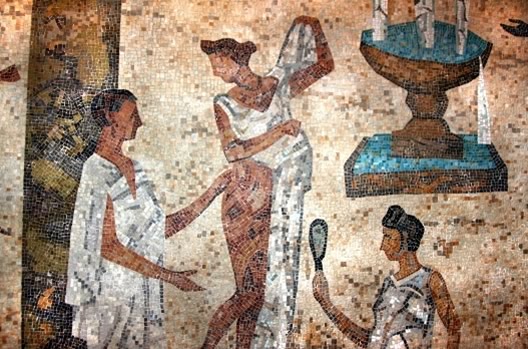 Due to a sputtering economy (New York City almost went bankrupt in 1976), the Forum of the Twelve Caesars closed in 1975. The space later housed Indian restaurants and then the current AJ Maxwell's Steakhouse. During a renovation, they uncovered the Forum's original mosaic, which can still be seen today.

Florence Fabricant wrote in 1995 of the Forums's long-term impact on service, something so very common today: "And though he does not recall being the first to have the waiter refold the napkin when the guest went to the rest room, those who worked with Mr. Baum at the Forum of the Twelve Caesars insist that he was responsible."

Video: The Forum of the Twelve Caesars on Mad Men