Share All sharing options for: Photo Proof: Intrepid Texans Will Deep-Fry Anything

The State Fair of Texas opened last week and will run til October 17, and, as promised, they threw every food imaginable into the deep fryer basket. Back in the day, state fairs were about celebrating agriculture: they were an opportunity for people for rural areas to take a break from their grueling, every day existence and maybe earn a ribbon or two to show for it.

In Dallas this weekend, they were still doing just that, only now it involves deep-frying anything remotely edible, including, but not limited to, frito pie and a friggin club salad. Also, through science they have developed techniques to deep fry beverages, so get your deep-fried margarita! Your deep fried lemonade!

Three of the eight contenders for the 2010 Big Tex Choice Awards were foods that are in some way associated with Texas: Frito Pie, Margaritas, and Texas Caviar. In past years, vendors have fried peaches, pecan pies, and stuffed peppers. The winner of this year's Dr. Pepper cake recipe contest will also be deep fried, whole. 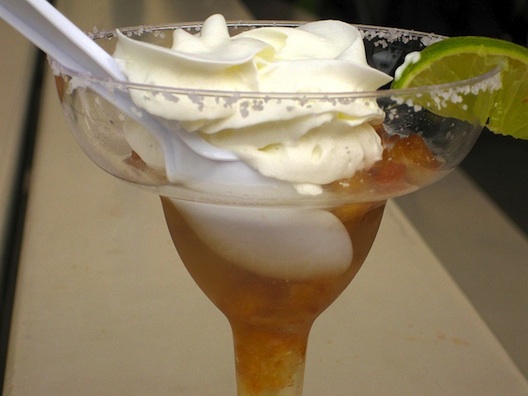 The fried margarita is funnel cake batter mixed with margarita, fried, drenched in additional margarita, and topped with whipped cream in a salt-rimmed margarita glass. It contains tequila! 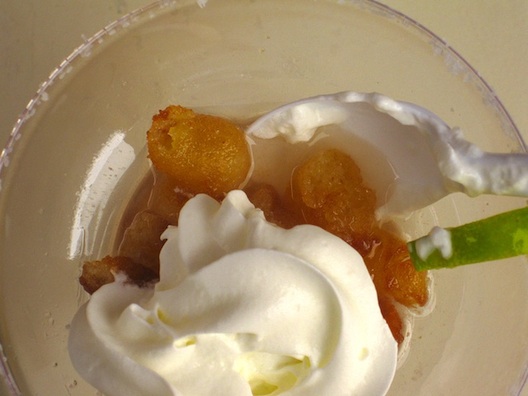 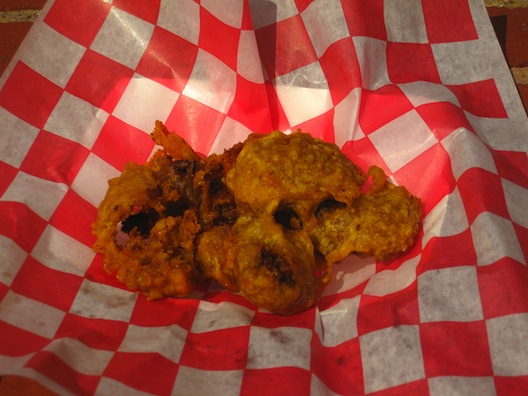 Texas-style chili (no beans) and cheddar cheese ensconced in Fritos and fried; served with sour cream and salsa. Also, winner of the Best Tasting award! 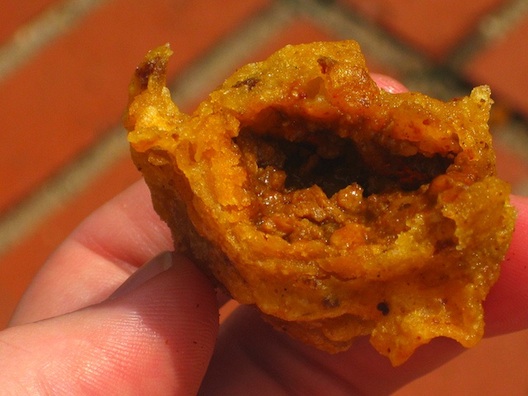 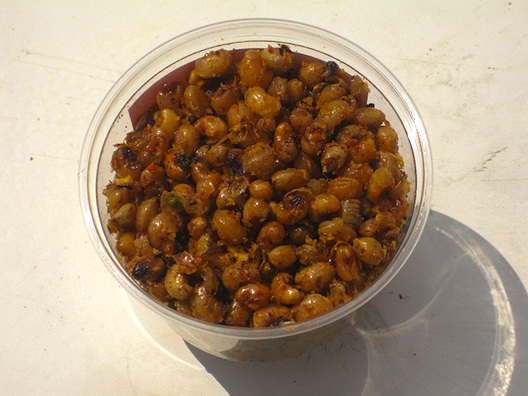 Black-eyed peas fried til crunchy and covered in seasonings; available spicy or regular. (When asked what the difference was, we were told "One is spicier than the other.") The spicy peas are pictured above. 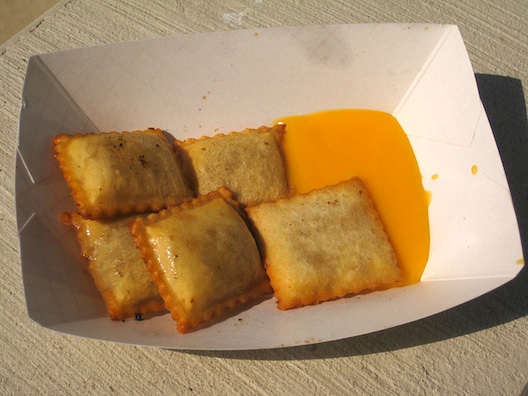 Little ravioli-shaped pockets made of pretzel dough and filled with beer, these were served with nacho cheese for dipping. They would've been better with mustard. Plus, one of ours was empty! Winner of the Most Creative category. 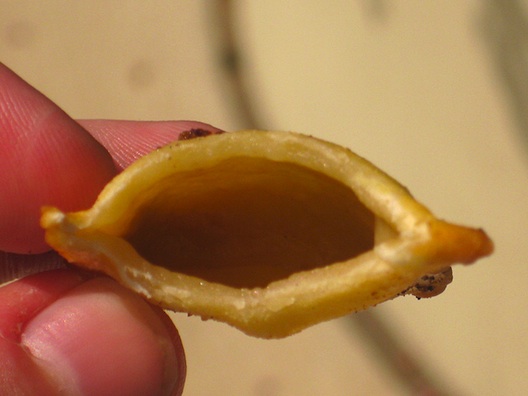 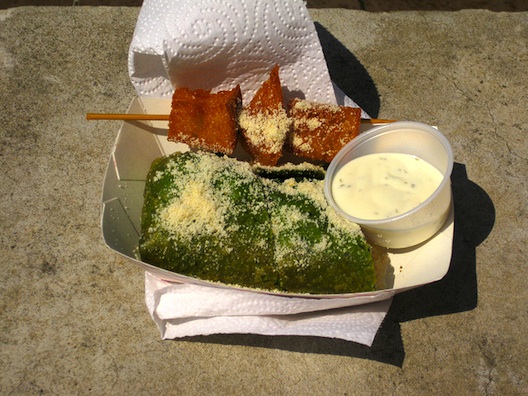 A salad made of chicken, ham, iceberg lettuce, carrot strips, cherry tomatoes, bacon and cheddar cheese rolled in a spinach wrap and lightly-fried (emphasis on lightly — the center was still cold, and the cheese was not melted.). Served with choice of dressing and croutons. 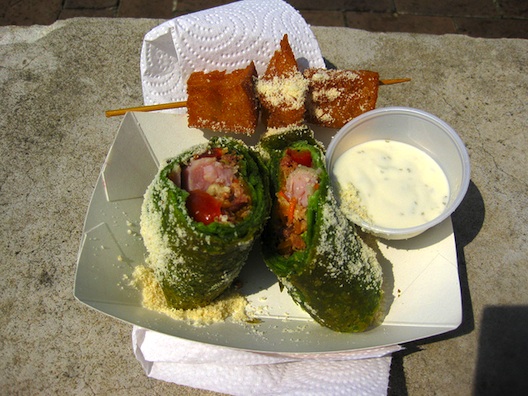 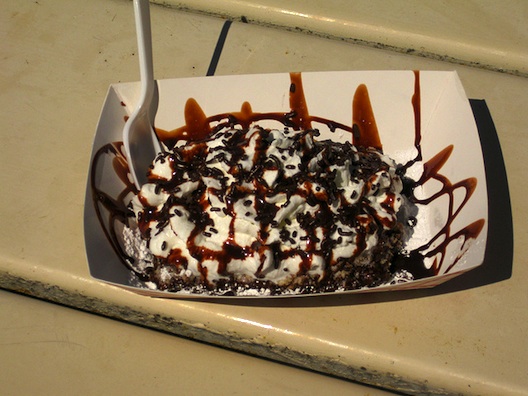 It's pretty much a fried s'mores Pop-Tart topped with whipped cream and chocolate syrup. There's supposedly peanut butter in there somewhere, but we couldn't really taste it. 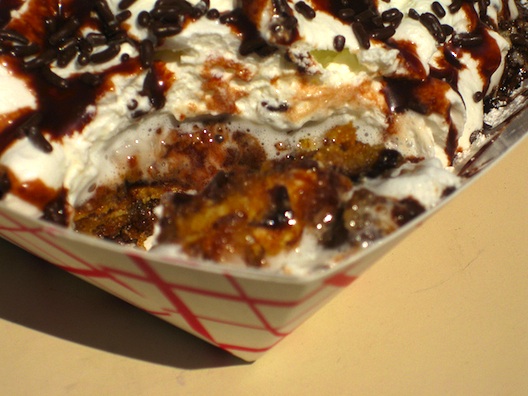 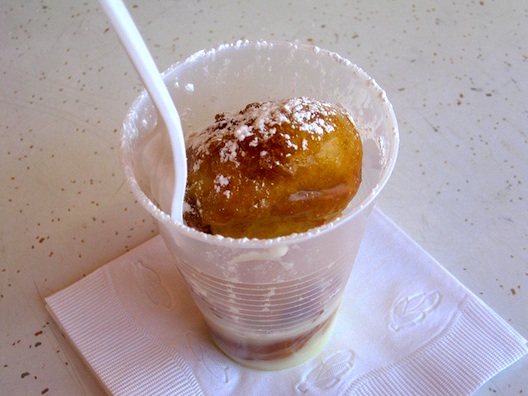 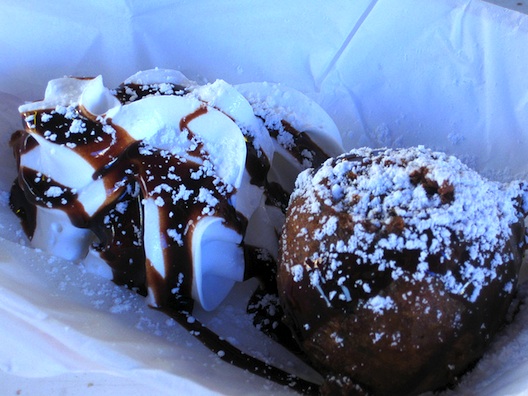 Perhaps the most convoluted of the fried offerings, a candy bar and a cherry are stuffed into a brownie and covered with cake batter before being tossed in the fryer. Served with whipped cream.

· At the State Fair of Texas, They're Going to Deep Fry Everything, Including Salads [-E-]
· Dr Pepper Jumps Aboard the Fair's Deep-fried Bandwagon [Dallas Observer]
· All State Fair coverage on Eater