Michael Laiskonis on Eggs and Intensity

Share All sharing options for: Michael Laiskonis on Eggs and Intensity 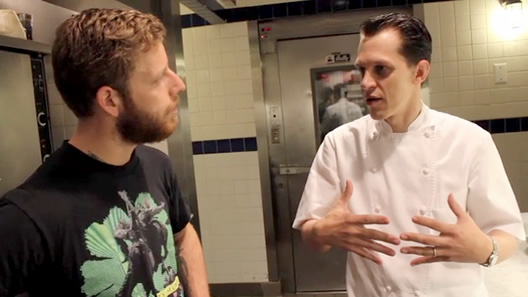 Although Johnny Iuzzini occupies the role of Greaser Bad-Ass Pastry Chef in the public imagination, Michael Laiskonis is the less-public real thing. Laiskonis, Detroit-born, Brylcreemed, and movie-star handsome, is the Executive Pastry Chef at Le Bernardin, maybe the most plum gig in the country. Past the big kitchen, Laiskonis has carved out a niche for himself, a cold marble counter to call home.

Unlike Iuzzini, Laiskonis is most often found in the kitchen where he works from noon to midnight. "When I came to New York I thought, great, I'm in the cultural center of the world," he says, "But I don't think I've seen a movie since I got here." Recently I stopped by the kitchen for a lesson on how to make the famous "Egg" — a milk chocolate pots de crème with crème anglaise foam, inside an eggshell — perhaps the most well-known off-menu dessert in the city.

See part one in this series: The Mast Brothers on How Artisanal Chocolate Gets Made.

The Cult of Liquid Death