The Science of Craft Beer, in Ten Easy Steps

Share All sharing options for: The Science of Craft Beer, in Ten Easy Steps 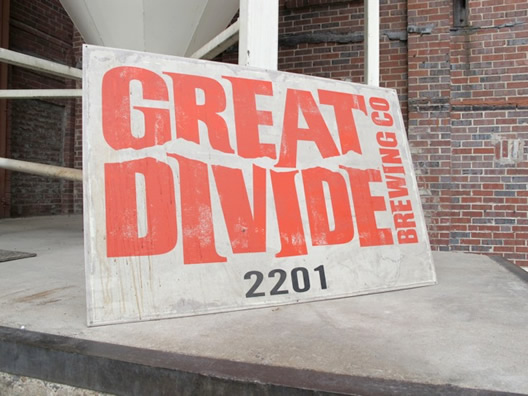 They say great wine is made in the vineyard, but how about beer? The process, for the uninitiated, is both surprisingly complex and beautifully simple, an alchemical tango between quality natural ingredients and precise operations in the brewhouse. Working with the basic ingredients of malted barley (or sometimes wheat or other grains), fragrant hop flowers (in various forms), yeast, and water, brewers conjure an amazing array of flavors in over 130 recognizable styles.

We recently visited Denver, Colorado's Great Divide Brewery for a crash course in the art and science of brewing craft beers. The process varies by style from place to place, but here, for your edification, are the basic ten steps to make a craft beer. 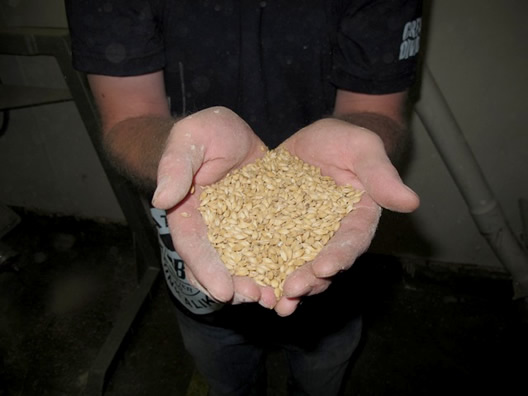 1. The vast majority of beers are made with a base of malted barley, which is grain that has been dampened, allowed to sprout, carefully dried and sometimes roasted (imparting color and texture to beers). Additionally, grains such as rye (as with Hoss Rye Lager, the beer we're looking at today), wheat, and rice may also be used in conjunction with malted barley to make up the base malt. The malting process creates enzymes, which will later convert the starches already present in barley into sugars during the mashing process. 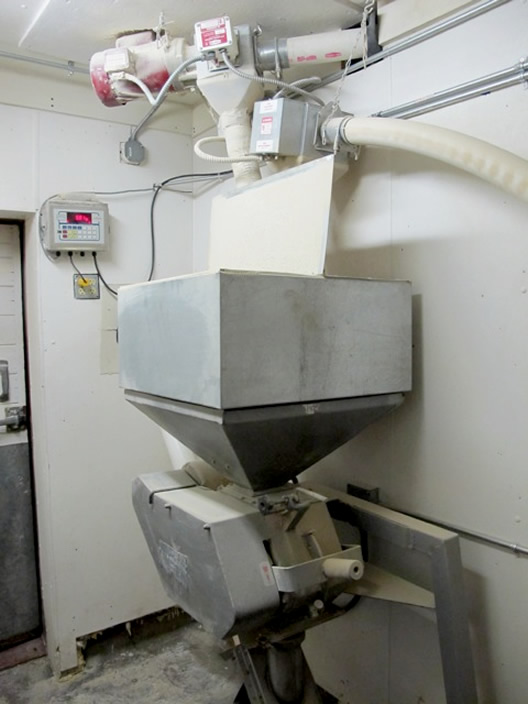 First the brewer mills the grain to crack the kernels' husks so the starches inside will be more accessible to enzymes during the mashing process. A standard batch requires 3,500-4,000 (Hoss has 3,700lbs) pounds of grain. 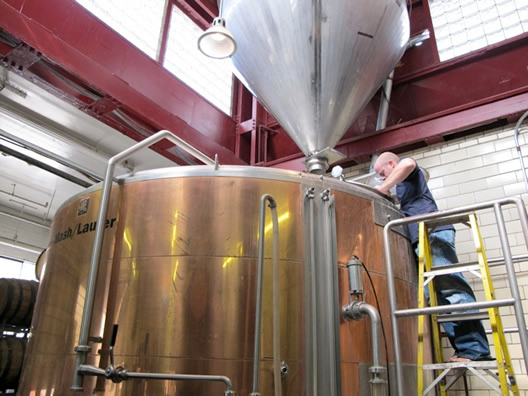 2. Next the grain is transferred into the mash tun with around 1,090 gallons of water at a temperature from 148 - 157 degrees. Every brewery uses a different mashing technique, adjusting the temperatures and mash times, but generally this is about a one-hour process. The liquid must have time to rest, during which time the enzymes created during the malting process convert the starches present into simple sugars, which will later be fermented.

The resulting mixture is called wort, and it's deliciously sweet and healthful. Some brewers make a point to drink a glass on their morning shift. Brewers also monitor their water very carefully: hardness and softness of water affect the brewing process and resulting flavors. 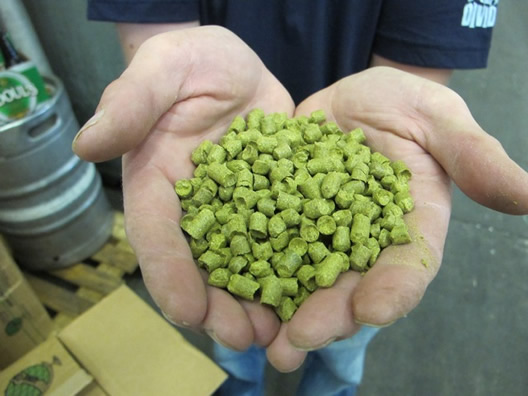 3. Next is the all important kettle/whirpool stage. After a two-hour transfer of the wort into this tank, the brewer adds a first addition of German hops (for Hoss, this is 14 lbs. Bigger beers, like Great Divide's Hercules Double IPA, has an initial addition of 40lbs) and brings the mixture to a rolling boil for around an hour. Hops are a resinous plant in the same family as the stinging nettle (and cannabis!), and they give beer its bitterness and aromas, thanks to something called lupulin, which resides in pollen-like glands inside the base of the flowers. 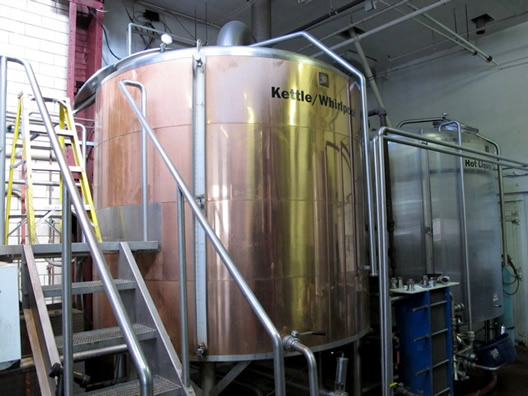 There are dozens of hop varieties, and brewers choose among them depending on their flavor and aroma profiles, which can range from piney to citrusy, grapefruity, grassy, dank, and herbal. They can be added in whole flower form, condensed into pellets (as shown), or added as an oily extract (more of an industrial timesaver). They balance the sweetness of malt and enhance the stability of beer. Depending on when they are added, they can give the beer bitterness (early addition) or aroma (later additions). At the end of this stage, the brewer uses a whirpool function to siphon out the used hops. 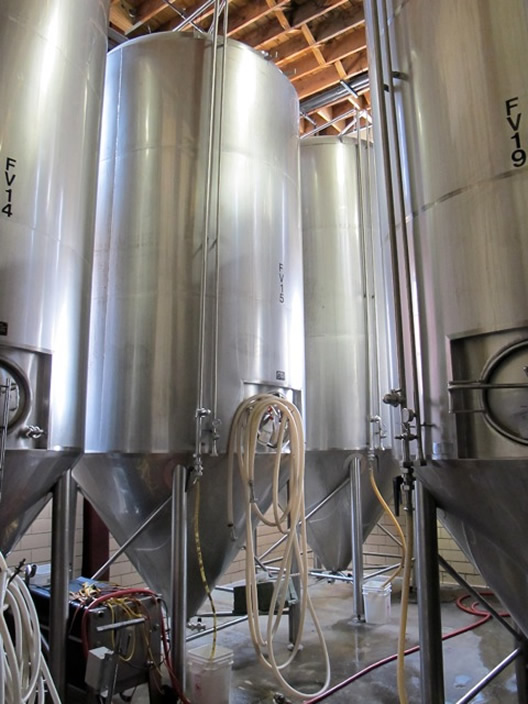 4. When the beer has cooled, the wort is transferred to huge stainless steel tanks for fermentation. Brewers' yeast is added for this stage, which immediately begin to feast on the sugar-rich brew, creating the byproducts of alcohol, CO2, and heat. There are two different main strains of brewers' yeasts: Saccharomyces cerevisiae, which works at warmer temperatures creating ales, and Saccharomyces uvarum, which works at lower temperatures, for lager beers.

The beer will stay here for seven to ten days, and then the temperature is dropped to 32F for a period of seven days to two months, reaching anywhere from 5-12% alcohol by volume; Hoss is a 6.2% beer. For this beer, Great Divide brewers utilize a lager yeast and then drop the temperature to 32F for five weeks, to condition the brew. 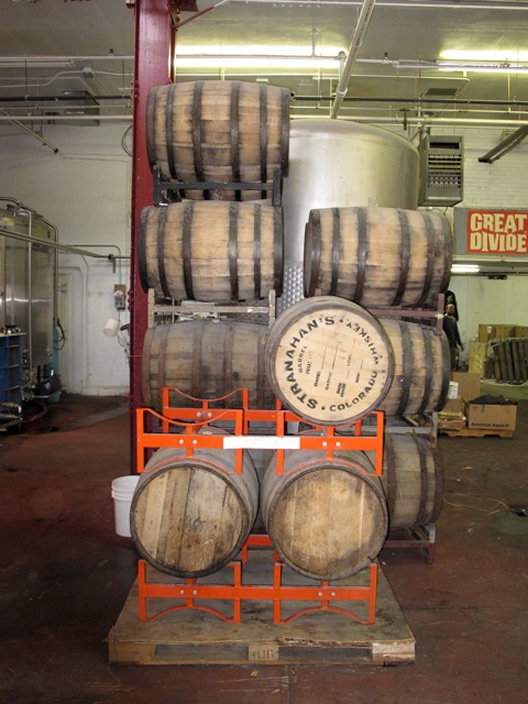 5. Some of Great Divide's beers are aged in wooden barrels that once contained Stranahan's Colorado Whisky. Barrel aging is tricky, but when properly executed, it gives beer a great deal of character, both from the barrel type used and special yeasts that are sometimes added during this stage, imparting oak, char, and other earthy and sour flavors. (Note: Hoss Rye Lager, the beer I'll later try, isn't barrel-aged.) 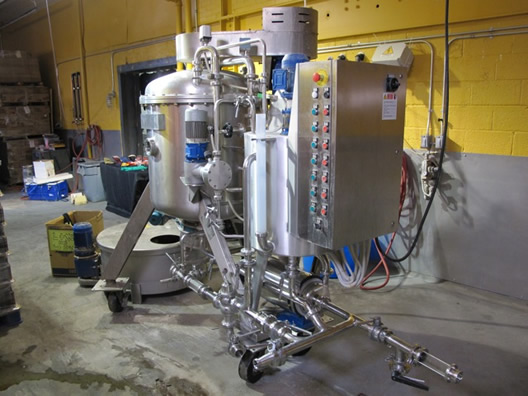 6. Next the beers are pumped through a filter made of diatomaceous earth (DE for short), a highly porous, silica-rich powder made from millions of fossilized diatoms, a sort of ancient algae. The filter removes spent yeast cells, grain matter, and other impurities the brewer doesn't want in the beer. Later the DE refuse and spent grains from the mash tun are mixed and sent to a local farmer as cattle feed. 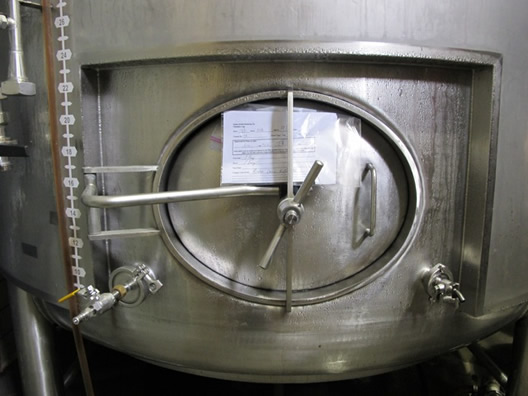 7. Here in the brite beer tank the beer rests for one day, and is force-carbonated with C02 at around 15 PSI. Each tank has a capacity of 100 brewers' barrels (BBL), or about 3,100 gallons (as do the fermenters). 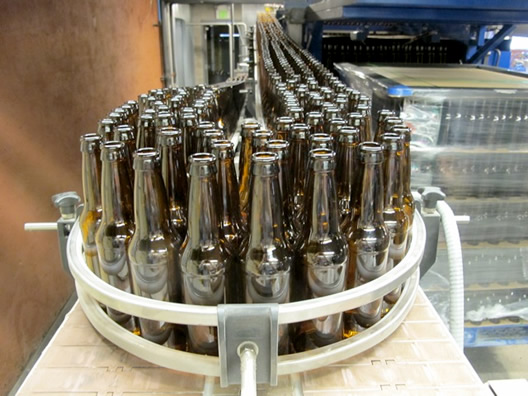 8. Now clear, fully fermented, carbonated, and rested, the beer is packaged in bottles or kegs. This bottling line can fill and cap at a rate of 140btls per minute. 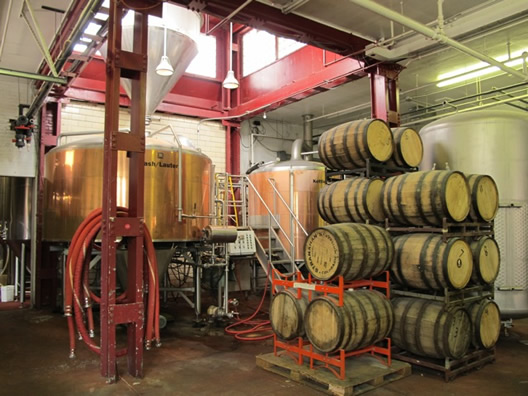 9. Great Divide was built in a former dairy processing plant. 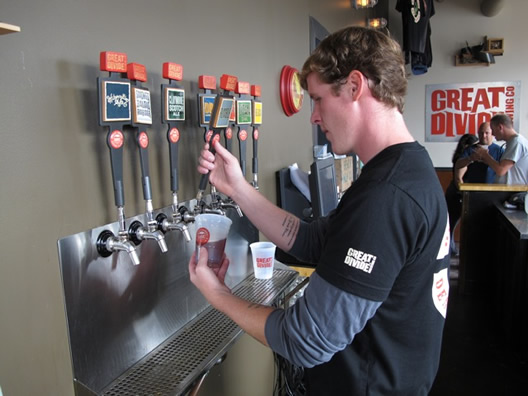 The attached taproom is a busy spot for locals at almost any time of day. 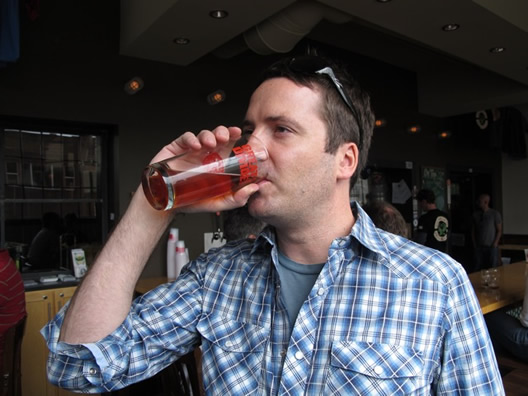 10. Pröst! The fermentation and aging process takes weeks, so in the meantime I go for a freshly-kegged pint of Hoss Rye Lager, a crisp, spicy lager brewed as a riff on the traditional German Märzen, utilizing rye in addition to barley. It's incredibly technical to make, but an delicious, natural pleasure to drink.