Share All sharing options for: A Regional Guide to American Craft Beers

Welcome to Craft Course, our new column on the art of craft beer. Every week Christian DeBenedetti will take a look at interesting beer styles, brewmasters and their breweries, and more from high to low, East to West, and around the world. 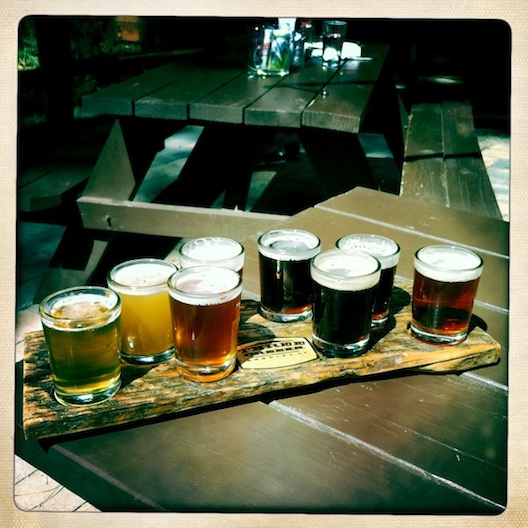 Last week Craft Course took a look at how the whole American craft beer scene came to be. I'll spare you the preaching, but suffice to say we have thousands of super-innovative, passionate brewers and drinkers to thank. What they've done is create a national fabric of beer that didn't exist before, one that's getting more elaborate every day. It can be a bit of a test to keep up, because every day, somewhere, there's a brewer tapping something new. Today, a brief regional primer on the state of American craft beer right now region by region — and some of the best brewing companies to seek out in those places.

Why Is Regionality Important?

The other day, the lovely and talented food writer Amanda Hesser tweeted the following: "Nearly obsolete: travel food stories about a city or region." It's an excellent point, but she is missing an important exception: craft beer. Around the world, and especially in the U.S., there's a hyper-local sensibility at work that runs in tandem to the broader movement and its transformation of styles, which echoes and expands local tastes.

To wit: locals in Bamberg, Germany drink a briny-tasting smoked beer many Americans would spit out. But I'd argue you can't fully understand why just by buying a bottle of the best version of the stuff from Aecht Schlenkerla or Spezial and quaffing it at home, or even by trying an American version like Alaskan Brewing Co.'s Smoked Porter, delicious though it may be. Going to a beer destination brings it truly alive. And while it's true that, as almost any brewer can get the same ingredients (like chefs), beer styles have freedom to roam, the fact remains that there's a local thrust when it comes to beer making and drinking. There's no better way to understand that than to drink at the source.

Portland is by all accounts the epicenter of the Northwest—and arguably the entire United States and even the world—when it comes to craft brewing, being both aggressively provincial and always innovative. Top quality grain and hops are both grown in the region, and the locals love to drink as much as they love to climb, ski, surf, roast fair-trade coffee, build exotic bikes and ride them around naked, or forage for mushrooms. There are at least 35 breweries and counting in the town many brewers now refer too as Beervana (seriously), from tiny upstarts like Migration, Coalition, New Old Lompoc, Upright Brewing and the all-organic Hopworks to established regionals and nationals like Bridgeport, and Widmer Bros. Elsewhere in Oregon the key players are Bend's Deschutes Brewery, Hood River's Full Sail and newcomer Double Mountain, and Eugene's Ninkasi. Seattle, Wa. is the native home of Redhook, Elysian, Pike Brewing, Hales, and scores more.

California is packed with great breweries from North to South, with especially worthy concentrations in the San Francisco Bay Area and San Diego. Overall, Californian brewing might aptly be described as freewheeling and experimental, with a tendency to go to extremes of flavor and formulation, especially with the use of hops (hello, San Diego!). Too many to cite here, but some of the path breakers include Anchor, 21st Amendment, Moonlight, and Magnolia in San Francisco and its environs; Stone, Ballast Point, Alesmith, Lost Abbey and Alpine in hop-head San Diego, and the wood-aged beer Merlins at Russian River in Paso Robles. Los Angeles spawned The Bruery, which, only two years old, is already sold in 20 states. Then there's NoCal's Bear Republic, Firestone-Walker, and who could forget Sierra Nevada in Chico? Their pale ale has arguably introduced more drinkers to craft beer than any other, and it's still bottle-conditioned in traditional, painstaking, British fashion. The brewery is a thing of beauty, and beer pilgrims flock to it daily.

Colorado, the Southwest, and the Rockies

Colorado is a great beer-loving state, being the home of the Brewers' Association (representing America's craft breweries), the Great American Beer Festival, held in Denver each fall, and hordes of burly backcountry skier types who love to cap off outdoor adventures with assertive, malt-forward beers. Colorado beermakers of note include Boulder's Avery, Denver's Great Divide, Longmont's Left Hand, and Lyons' Oskar Blues, which released the nation's first canned craft beer, Dale's Pale Ale. Again, that's a mere slice. Montana and Wyoming represent, too, with Big Sky and the Germany style Bayern Brewery in Missoula, and Snake River over in Jackson, WY. Moab, Salt Lake City, Taos, Santa Fe...every single one has a worthy brewing company or two and more on the way.

The Midwest is of course the home of America's historical brewing tradition, bestowed to the new nation by waves of thirsty immigrants who imported the light lager style brands that still fund conversation-friendly beer commercials during the Super Bowl. Today, though, a vanguard of small breweries is rewiring the heartland's beer DNA with big, drinkable beers in a wide array of inventive, even unheard of styles. Here the future belongs to brewers like Kalamazoo's Bells Brewery, Kansas City's Boulevard, Munster, Indiana's Three Floyd's, Chicago's Goose Island, Wisconsin's New Glarus, and Dexter, Michigan's Jolly Pumpkin, which is one of the U.S.'s most innovative brewers, using wild yeasts and wine barrels in the Belgian-influenced brewing processes.

The Founding Fathers were avid brewers so it's no surprise the Northeast should embrace craft brewing today, too, especially cosmopolitan New York, where famed redhead chef Mario Batali and co. are set to start their own beer production in Manhattan's swank Gramercy area, joining fellow 212 and 718 area-code beer pioneers Brooklyn Brewery, Kelso, and Six Point, and upstate powerhouses Ommegang in Cooperstown and Pleasantville's Captain Lawrence. Maine, Vermont, Pennsylvania, and even New Jersey are thriving craft beer hubs today, too. Breweries to seek out include PA's Victory, Stoudt's, Delaware's Dogfish Head, Portland Maine's Allagash. And lest we forget the new command—with Anheuser Busch now in foreign hands—Boston Beer Co., maker of Samuel Adams Boston Lager, is currently the nation's largest brewer. Their Boston Lager may be the best thing that has ever happened to American air travel, because it's almost universally available when we're flying the unfriendly skies.

The last frontier of American Craft Brewing (Alaska and Hawaii are all over it, too, and more on them later), the Southeast has embraced craft beer wholeheartedly in recent years. One of the most-lauded breweries at the 2010 World Beer Cup in Chicago this April (considered the Olympics of the beer industry) was Devil’s Backbone Brewery of Roseland, Virginia, population 2,415. Even tiny Kiln, Mississippi has it's own little upstart making waves in Bud country, Lazy Magnolia. Tampa's Cigar City Brewing has been cranking out attention-grabbing beers, and New Orleans is having its own craft beer revival amid the ongoing rebirth following Katrina, which leveled at least one brewery.

Thanks for reading Craft Course and keep in touch!