Shots fired in the bi-coastal food trademark / bao war! New York City chef/restaurateur Eddie Huang successfully trademarked the "Chairman Bao" name and tweeted to the Chairman Bao Truck — a Chinese steamed bun food truck in San Francisco from the company Mobi Munch — that they "should rename ur shit Mr. Me Too Truck."

Background: Back in May, the Chairman Bao Truck opened in SF, and Eddie Huang was not happy since "Chairman Bao" was also the name of his best-selling pork belly steamed bun sandwich at his NYC restaurant Baohaus.

When he first found out about it, Huang wrote on his blog, "These people straight took the name of my #1 item and set-up shop with it. I have used the mark in commerce and shown the intent to trademark it." (He also told them to, er, "FUCK YO COUCH.")

And hot damn, he did it (not the couch-fucking, the trademarking). Searching the United States Patent and Trademark Office database, we discovered that Edwyn C. Huang trademarked the name "Chairman Bao" on May 20, 2010, only one day before Mobi Munch tried to trademark it, too. See screenshots below: 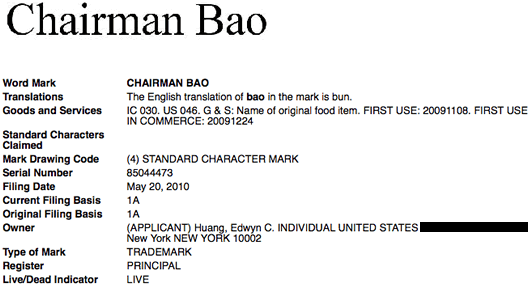 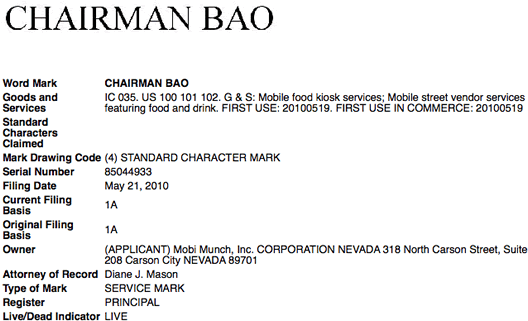 So what happens with the potential Eddie Huang vs. Chairman Bao bun-off?

Update: Eddie Huang — who, according to a source "is a lawyer, dawg" — filed a new post, "That's Esquire to u," and wrote, "[Y]a boy handled this matter from APT 1. Ground mo-fuckin floor... But look what happened? You got Diane J. Mason at Suite 208 and yall still late... U shouldn't have stopped at Starbucks before work boo. Wash ur stankin ass, eat ur wheaties, and file the mark. That's how Esquires do..."