Welcome to Craft Course, our new column on the art of craft beer. Every week Christian DeBenedetti will take a look at interesting beer styles, brewmasters and their breweries, and more from high to low, East to West, and around the world. 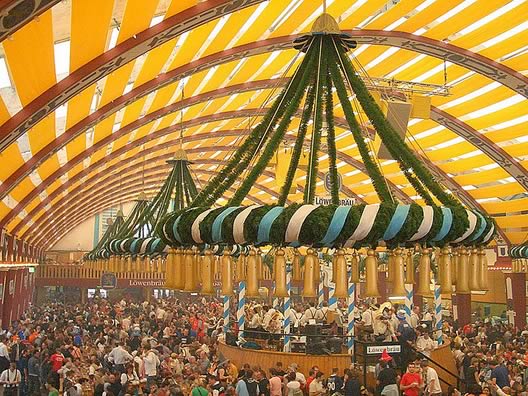 To a beer lover, there's no headier time of year than fall — when the nation's taplists deepen with possibility as cooler nights beckon exploration of bigger beers. In America, the Great American Beer Festival celebrates the season in Denver (this year, from Sep 16-18; alas, sold-out long ago), but the biggest beer party in the world by far is Munich's Oktoberfest, which commemorates a particularly well-oiled royal wedding party back in 1810.

For Germans, the Oktoberfest is more than a party, it's a national institution, and an estimated 70% of attendees are local. In 2007, beer consumption there was the equivalent of just under 15 million pints of beer consumed.

If you didn't make there by (at the latest) your mid-20s, you have missed the ideal window of opportunity; it takes some serious liver performance to keep up with the Bavarians and their guests. Hordes of backward-hatted bierleichen — "beer corpses," the phrase for wastrels — clog its tents, generating an estimated 1000 tons of garbage per year (and losing some 200 cell phones while smashed).

This year's edition (Sept. 18 – October 2), is the 200th anniversary, and ought to be quite the blow-out with more than 6 million visitors expected. As a lover of German beers and culture, I had a great time at the big Oom Pah Pah when I attended, but I wouldn't rush to return. Munich and the brewery-dotted hills of Bavaria and Franconia? Absolutely. A crowded tent with 10,000 inebriated Phi-Delts doing the Chicken Dance? Nah. The smaller, more manageable events in smaller American small towns and in great beer bars are far more fun. Hit your local beer bar or The Brewers Association website to find out what's going on near you.

The other reason staying stateside for Oktoberfest parties trumps The Big One: quality beer. The traditional beer of the season in Bavaria has always been Märzen (say "mahr-tsen"), a fulsome brown lager with assertive but smooth malt character and spicy hops that was historically brewed in March (hence the name) and aged in Alpine ice caves over the summer. Oddly, it's not generally served at the Munich event. Instead, a decent but cheaper-to-make light lager called Helles flows like the Rhein.

Today, though, a select few German brewers and many more American craft brewers have embraced the old traditional style of Oktoberfest beers (minus the ice caves), and they're definitely worth seeking out. They're smooth, spicy, and festive, under-appreciated, and will warm you gently with a sessionable ABV (alcohol by volume) of five to seven percent. They're ideal for washing down some brats, sauerkraut, or, even better, schweinebraten, a.k.a. roasted pork, usually served with dumplings in a dark beer sauce.

Oktoberfest starts in a few days, but you don't have to wait to drink the season's best brews, which are already on top and on the shelves. Here are four excellent ones to try:

1. Samuel Adams Octoberfest (Boston, USA): Brewmaster Jim Koch uses five malt varieties and two varieties of German "Noble" hops (meaning they're a sort of heirloom variety prized for their distinctive, delicate aromas and flavors) he sources himself. It is one of the tastiest of all Oktoberfest beers we've tried, and it should be relatively easy to find. (5.3% ABV; samueladams.com)

2. Ayinger Oktober Fest – Märzen (Aying, Germany): Ayinger, brewed in an idyllic little village a short distance from Munich, is large enough to be imported to the U.S. (and boast a beautiful gasthaus in the center of Munich, too), but apparently too small to be represented at the Oktoberfest blow-out. Too bad, because this amber-hued, slightly nutty brew with a hint of malty sweetness is one of the best available. (5,8% ABV; ayinger.de)

3. Brooklyn Brewery Oktoberfest (New York, USA): Bready and spicy, this is one of the smoothest beers brewmaster Garrett Oliver makes, and we love the bottle, too. It's the perfect complement to a good bratwurst. (5.5% ABV, brooklynbrewery.com)

4. Great Divide Hoss (Denver, USA): Packed with clean, dry, dark stone fruit flavors and an extra spiciness (from the untraditional but delicious addition of rye malt), this was GD's first commercially released lager, a harbinger of even better things to come. (6.2% ABV; greatdivide.com)