Share All sharing options for: Here We Go Magic on the Perils of the Interstate Food System and Their Love of Cured Meats 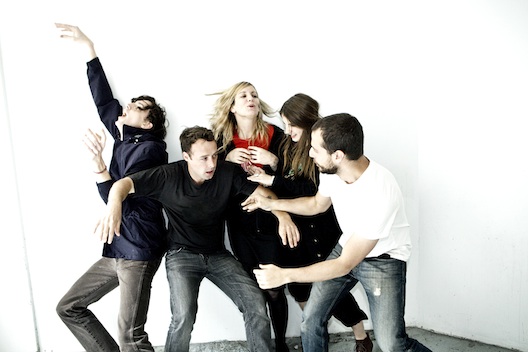 Here We Go Magic is the latest incarnation of folk troubadour Luke Temple. Whether or not you're familiar with Temple's past work, you may have noticed that in the first year as a full band, HWGM have been toured nearly every major international festival from Glastonbury to Pitchfork to Primavera Sound. Rarely returning to their home in Brooklyn, the group somehow managed to release a new album on Secretly Canadian this year, garnering strong attention for their colorful brand of folk pop. So when on earth do they find time to eat!? Drummer Pete Hale explains, on the road you have to find your own dining rhythm: embrace the meat plate and beware of the Interstate.

So would you say you're the biggest foodie in the band?

I don't really identify as a foodie, but I like to eat, especially dinner. Mike (Bloch, guitarist) and I definitely have fun food adventures. He's most likely to come eat a bunch of oysters or the whole "authentic" menu at a Szechuan joint.

What's your favorite US city to tour specifically because of the food?

Outside of New York, I think Los Angeles has the best food. It's especially good for touring bands because you can eat really well-made and fresh food for cheap. San Francisco has more of a "food scene" but the growing's good all over California, and SF tends to take itself too seriously without holding her restaurants to a standard other than quality of ingredients. It has to taste good, too!

What areas of the country do you think are lacking in culinary goodness?

The entire interstate food system is dreadful. There's no regional cuisine on the big highways, so your choices are all the same poison. I eat a lot of peanut butter and banana sandwiches in the interior of this country for want of real food options.

I saw that on one of your recent European tours surrounding Primavera Sound, you were tweeting about a 'tour of the meat plates' backstage. Can you tell me about this epic tour of meats and what you discovered?

Spain is THE spot for cured meats (especially ham). The festival did nothing to refute that mystique. I think Mike actually wrote that remark about Primavera's hospitality room. I was pumping a keg somewhere in the nether space of that festival.

You also mentioned you kept a food journal on tour. How rigidly do you keep up with it? And is it for health reasons or just a fascination?

I slacked off because it got depressing. I was originally keeping it for a publication called the Diner Journal in Brooklyn. I've written for them before and thought it would be fun fodder. It started to read like a Groundhog Day for dyspeptics.

Do you ever indulge in fast food and/or local street food on tour? If so, what are your faves/least faves that you've encountered?

Not fast food; I guess Subway is a regrettable concession. I can definitely house a McDonald's Blizzard (without regret). As for street food... I can get down with taco trucks, Halal trucks, etc... The best slice of pizza I've ever had was on the street in Austin, TX (no joke!). A kid had just made a pie in the oven of a fancy restaurant/bar (not a real pizza spot, it was a fun experiment for him) on East 6th and was selling slices for FIVE BUCKS! Best pepperoni slice and best $5 I spent at South By Southwest this year.

What was the best meal you ever had on tour and where?

My birthday this year happened in Brighton, UK. We found ourselves at a little Mediterranean place on the beach. Everyone in the band was tired and broke, but they sent me a bunch of oysters (my favorite) and these amazing whole shrimp. We drank good wine and I cried.

Is there a winner for worst meal?

Worst is one particular Waffle House in Pennsylvania .

How do you go about finding the top spots? Twitter, Yelp, asking hosts, asking venues, wandering the streets?.....

Because I'm a musician, I'm also a bartender. I've been working in restaurants in NY for over ten years. Many of my best friends are in the business. I steer clear of blogs and Yelp-style posts. I love it when someone I like very much takes me to his/her favorite spot, or we go check out a new place.

Any especially unique food stories or experiences from the road?

The thing with touring is that it can all run together. I think the best times are when something happens out of the ordinary, or someone goes above and beyond. Eating in the home of someone is special, more so when you haven't a home. I like it that we occasionally "reward" ourselves with a bit of a splurge on a good dinner. That can go a long way when you're weary.

Check out Here We Go Magic's video for "Collector"

Here We Go Magic's second album Pigeons is out now on Secretly Canadian.