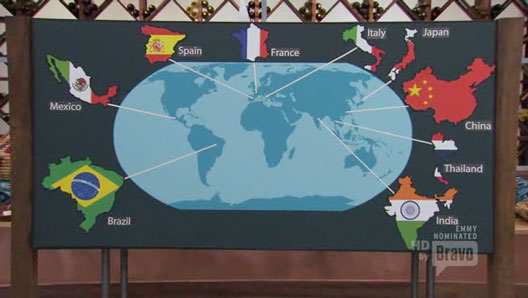 What a week of reflection it's been, am I right? "And then Peagate happened." Get used to hearing those words, friends, because we are now living in a post-Peagate world. Where were YOU when Ed couldn't find his puree? I'll never be able to only-sort-of care about a televised cooking competition the same way again! Just kidding. Five sentences into making jokes about it and I'm out of steam. What a non-thing it turned out be. It turns out the judges don't know about it and not even the contestants seem to care. Why was this stolen pea puree controversy shoved down our throats again? While it's addressed in the opening minutes of this week's episode, the drama deflates instantly: Alex is cocky, Ed is confused. Well all right. Moving on.

Swedish/Ethiopian superstar chef Marcus Samuelsson, owner of the Red Rooster and winner of season two of Top Chef Masters, is our Quickfire judge. Kevin calls him one of the greatest chefs in the country right now, which is sort of true, but is Samuelsson actually cooking at any restaurants currently? Red Rooster's not even open. Maybe cooking is like boxing, and you only need to defend your title once or twice a year and also it's very corrupt and violent. 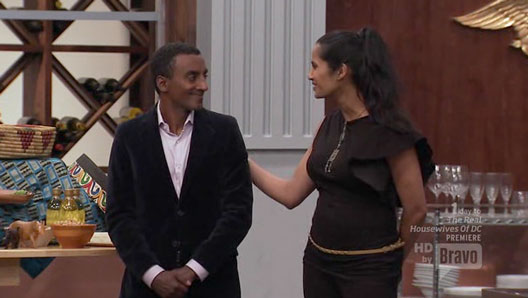 Padma tells the chefs that DC is one of the most diverse cities in the country and a Mecca for global cuisine. A Mecca? Almost any sentence on a reality show with the word "Mecca" in it is a Mecca for gross exaggeration. DC is known for its Ethopian restaurants, which I did not know, and today's Quickfire demands the chefs create an Ethiopian-inspired dish. Chef Samuelsson walks the chefs through berbere, the traditional Ethiopian spice mix, and wot, a flatbread. What's wot? That's wot I said! (That is of course a line from the classic comedy bit "Wot's on First" by Ethopian comedy duo Abai & Costello.)

Look, I really like Ethiopian food, and I am all for this straightforward challenge that requires the chefs to prepare a meal inspired by a specific cuisine and then have it be judged by someone very qualified. At times it is almost as if we are watching chefs get judged by their cooking! Almost. But also Ethiopian food is not everywhere, and unless you live in city with an Ethiopian immigrant population, you probably have not even tasted it. Kelly and Tiffany haven't. This challenge is sort of elitist? What is the point of having the majority of chefs just guess at a cuisine they've never had? Also, whoops, I am writing on a yuppie restaurant blog and accusing a show on Bravo of being elitist. I guess it's time for me to go to prison. Not jail, but prison, because I am going to be there a while.

Chef Samuelsson tastes the food. Ed, Angelo and Kenny have all worked with Ethiopian food before, and Samuelsson jokingly asks Angelo whether he was born in Ethiopia. Angelo, whom I continue to believe is a spy, gets very nervous when asked about his birthplace. "Hah, of course I was not born in Ethiopia! Why, is there something wrong with my papers? I am sure there is 100% real explanation. I was born in Connecticut America, home of blue jeans and home run baseball. I love babes in bikinis!" 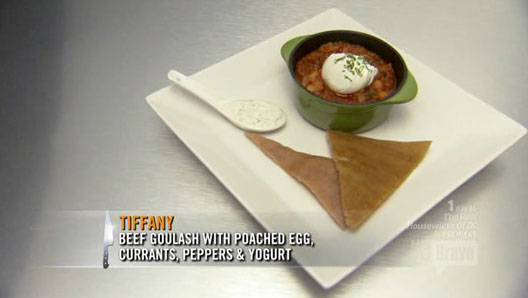 Tiffany is so happy! But you know who is even happier? Ed. Settle down, Ed. 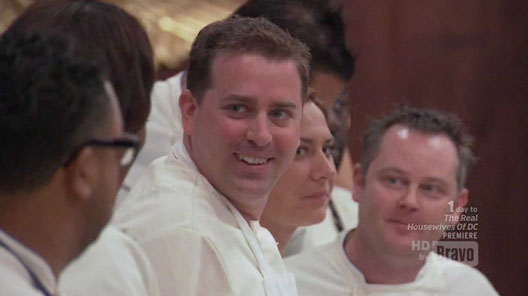 Padma rolls in a giant chalkboard. It's a map of the world! There are nine countries up on the board. Each chef will create a dish inspired by a specific country and serve 100 portions of it to diplomats, ambassadors, world dignitaries, and Gail at the Meridian International Center. And there will be no electricity, only chafing dishes.

The chefs draw knives to decide the order in which they choose countries. They all seem to get what they want, except Kevin, who chooses India. He's never cooked Indian food before. Did you know that Padma is Indian, Kevin? Huh bro. 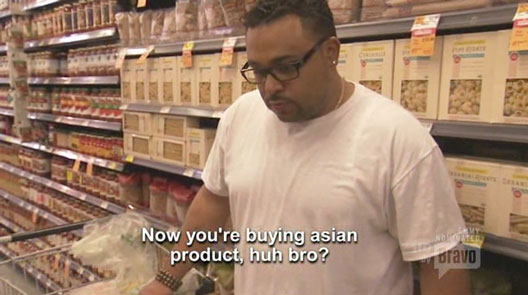 Various shopping and prepping happen. Ed feels confident in his Chinese food dish because he's "had some Chinese girlfriends in the past." Cool. Real cool. Ed has seventh grade dork syndrome. We get it; you are all grown up. Then, Alex falls down.

The chefs set up in the Meridian. The Sternos pose problems, as they do not heat up very quickly. Stephen is worried he won't have time to overcook and ruin his rice, but he just makes it. 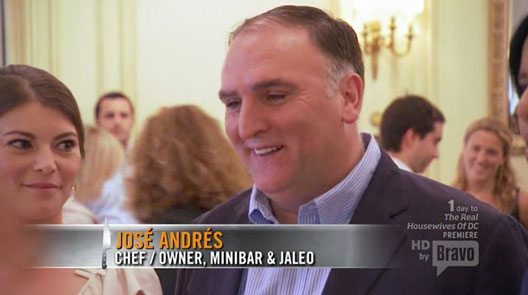 José Andrés is another guest judge here, and we can only imagine he'll hate Alex's Spanish tapas. All the ambassadors say very nice things to the camera about the contestants' dishes. (The Italian ambassador: "today's Carpaccio represents Italy better than I do.") Except the Swedish ambassador. He is a dick, in a hilarious way. "I guess I'd pay five dollars for it at a food stand."

During some downtime, Angelo pulls a classic spy move and wraps the toilet in plastic wrap. Stephen is drunk and his balls touch it. They all laugh and then get into bed with one another.

The judges call in Kelly, Kevin and Tiffany. They made the judges' most favorite dishes. Kelly's Carpaccio highlighted simple local ingredients, Kevin's stewed chicken with curried flavors manage to really impress everyone, even Padma, with its layers, and Tiffany's Mexican tamale seemed damn near perfect. What a day she's having! She wins the Elimination Challenge and $10,000. Her wedding in Costa Rica is now paid for! Aw, that is really nice. Has any contestant ever won the Elimination while they had Immunity? Well done, Tiffany. It's your day. 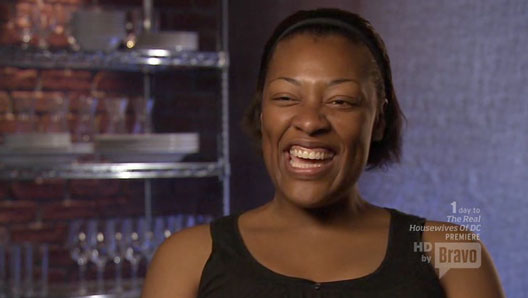 Tiffany sends in Alex, Stephen and Ed. To the judges. Ed undercooked his duck. He overpromised, under-delivered. Alex showed zero cooking technique. "It was like a little nightmare." Oof. But Stephen's rice was broken, mealy and overcooked. His steak wasn't great, the Chimichurri was too garlicky and none of it was that Brazilian. He goes home. Obviously. 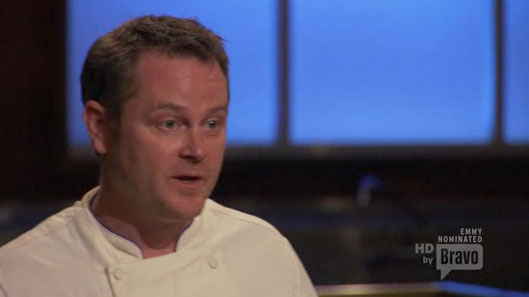 Goodbye Stephen! I guess I'm a little sad. I feel bad he got eliminated in the same week as his drunk balls touched Saran wrap, but that is also why I am not sad. I hope he got to take the Saran wrap with him.

Next week is Restaurant Wars, and the last chance for this boring season to get its act together.