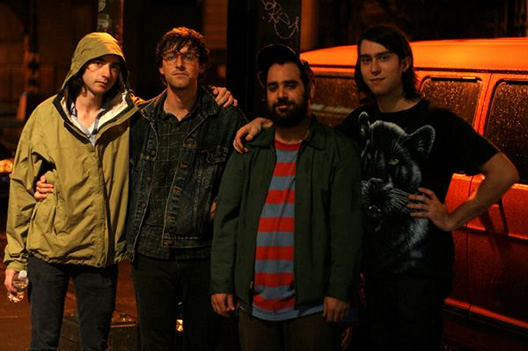 Real Estate is a fixture in Brooklyn's latest musical groundswell and practitioners of a dreamy beach-pop sound termed Chillwave. But despite the apparent "chillness" of their music, the boys of Real Estate rarely rest. They spent much of the last year on tour, playing everywhere from dingy basements to Spain's Primavera Sound Festival, and garnered Pitchfork's coveted Best New Music title for their debut album. I caught up with Real Estate's drummer and poutine-connoisseur, Etienne Pierre Duguay, to discuss eating on the road.

You guys just got back from yet another tour, any favorite food spots you encountered?

We love Canada's most famous food "poutine" — fries, gravy, and cheese curds. After we played the Pitchfork Music Festival this year we went up through Canada and there are these diner-style restaurants with like 20 different poutine varieties. They have Tex-Mex poutine, mushroom and herb poutine, all kinds of options. Basically we hit all the poutine places through Toronto, Montreal, and Ottawa.

Then I have to ask, have you been to TPoutine, the poutine-only restaurant on Manhattan's Lower East Side?

I have been to that poutine restaurant on the Lower East Side, but that place is more like a New York version. I wouldn't say it's that different in actuality but really it's more about sauces. It's like a french fry store that has poutine as an option — it's more like a flavored mayonnaise store.

You're from Jersey, so I'm sure you've had the US answer to poutine: Disco Fries, right?

Yeah actually I just had some — we're in New Jersey right now for a festival that I'm MCing and about to play in a couple minutes. We just ate at White Manna, which was a big inspiration for White Castle. It's also where our friends Big Troubles just shot their music video.

What have been your best and worst food experiences been on the road?

The worst food experience on the road is probably too graphic to retell, but it was cheese curds in Madison, Wisconsin.

I know and we're not even being paid by the Dairy Association of the US! But yeah, that was a really negative experience and it was the first time the band went to Madison, back before we were even called Real Estate. We got a lot of fresh cheese curds from the farmer's market there and just had... you know... a LOT of them and later is was not so fun. It was pretty gross...

What are some the best places you've found while touring the States?

Well we really love fast food, which I think is the best and the worst at the same time. Probably our favorite fast food — that doesn't actually make you feel bad later — is In-N-Out Burger in California.

Do you do the off-menu ordering at It-N-Out?

Yeah! Animal Style all the way and sometimes you can get these dinosaur-shaped chicken things. Ordering off-menu there is like this secret world, it's like the Occult! So after In-N-Out, I'd say the second-best fast food burger joint is Steak 'n Shake. On the road we try to eat at every fast food restaurant across the US and eat all the burgers: Carl's Jr., J&B, Whataburger in Texas, Arby's....

We do try to eat local when we're on tour — like, if you're in Philly get a cheesesteak. If you're in Chicago get a sausage. In Miami get a Cuban sandwich. We use Yelp a lot to find good places, even though it has failed us on occasion, it's a good way to find local places.

You've mentioned you don't splurge on fine dining on tour, do you ever go the opposite route and do street food?

Yeah definitely! The best street food I've ever had was in Los Angeles — they have these bacon-wrapped hot dogs. It's not even a legitimate food truck, it's just this dude on the street but we've gone there each time we're back in LA. It's down the street from Echo Curio in Echo Park, right off Sunset Strip, and they set up there every day.

One of the first times you and I hung out, I came to one of your shows and brought guinness cupcakes. Do you have any fun food-themed stories from shows you've played?

Yeah one time when we were on tour in Seattle we played at this outside carnival and [Real Estate's guitarist] Matt got on a double-bike for a bike-jousting contest. Needless to say, someone got hurt really badly and so they started giving away free cakes. So everyone was getting injured at this thing but everyone was also getting free cake. It was this weirdly negative experience and a totally positive experience all at the same time.

You guys do have a reputation for being the life of the party, do you have a hangover food of choice?

Best hangover cure is probably another beer, haha. But I'd say even though you always want pizza and burgers, the best is really quinoa, kale, and a Gatorade — nice and neutral after a long night of partying.

So no poutine and cheese curds huh?

Oh no! DEFINITELY no cheese curds!!!

And now for the lightning round!

Best diner: Definitely NOT Kellogg's Diner in Brooklyn, I tried to bargain to buy a lobster there once and the guy there wouldn't budge!

Below is a video for Real Estate's "Suburban dogs" (via Pitchfork.tv)