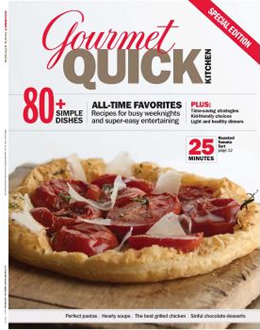 Condé Nast is reviving the Gourmet brand to create "special edition" magazines, the first which will be called Gourmet Quick Kitchen, the New York Times reports.

Recycling Using "recipes that were published in Gourmet before its demise last year," (but with new photos!) the ad-free 128-page magazine will be edited by Gourmet's previous Executive Food Editor Kempe Minifie with Catherine Kelley, former executive editor of O, the Oprah Magazine. The introduction states, "We are delighted to gather 81 of our most memorable simple dishes together for the first time in this special edition of Gourmet Quick Kitchen."

It goes on sale September 7th at retailers including Whole Foods, Barnes & Noble, Borders, Hudson News for $10.99, or is available online at the Conde Nast store for $12.98 (including shipping). We still await Gourmet Live.

Condé Nast will introduce three newsstand only special editions under the Gourmet brand, beginning with Gourmet Quick Kitchen on sale September 7, 2010. Gourmet Quick Kitchen will be a collection of 81 quick, easy and timeless recipes coupled with beautiful photography, packaged as an illustrated cookbook.

With a modern design and more than 120 pages, Gourmet Quick Kitchen will be filled with classic Gourmet recipes and photos, in addition to featured new content, including food photographs and helpful kitchen tips throughout. Memorable, simple dishes will be brought together for the first time and organized into 12 chapters, categorized by a recipe index. The special edition will include eight new menus, complete with wine pairings by Belinda Chang, Wine Director at New York City’s The Modern.

“The Gourmet special editions offer a new way for food lovers to add to their treasured collections and for new cooks to build a solid foundation,” says Carol Smith, Vice President and Publishing Director, Bon Appétit and Gourmet.

Gourmet Quick Kitchen will be available at newsstands and at the condenaststore.com for $10.99. The second and third special editions will be published in 2011.

Gourmet magazine was introduced in 1941 under the cover line “The Magazine of Good Living.” Seven decades later, its brand stands for the same qualities.