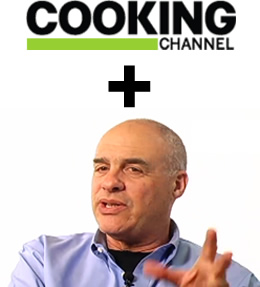 The Cooking Channel (Food Network's little sibling) announced new shows for their fall programming lineup, including some of the bigger names from the Food Network proper, including Rachael Ray's Week in a Day (based on her "bold new cooking concept for busy families – one day of cooking, five days of eating") and Brunch @ Bobby's (Bobby Flay cooks brunch in a "relaxed Hamptons kitchen" that you could never possibly own, sometimes using symbols where words will do).

Also of note is The Minimalist with New York Times columnist, cookbook author, and "slogger" Mark Bittman. Based on his column of the same name, the show "caters to the modern gourmet whose expectations are high, but time is limited." Promised are signature tips! Factoids! Recipes! The mission is to "get people cooking simply, comfortably and well." Which sounds great, hooray.

And it is curious! For now Mark Bittman will soon be on the same network as best-selling cookbook author and pernicious product pusher Lisa "Hungry Girl" Lillien. Bittman is no fan of the processed foodstuff: On his blog, he writes a recurring series, "This #$!% Has Got to Stop," in which he calls out things like Chocolate Cheerios and McCormick's Recipe Inspirations, exactly the sorts of things that are advertised on the Food Network.

Even curiouser! Back in 2009, Bittman wrote a screed calling cooking shows on TV "charades" because "nearly every ingredient is usually prepared in advance" and "it's all taped" and "doesn't take place in real time." Criminally, mistakes are sometimes edited out! "How you chop an onion? It doesn't matter. At all," he also wrote. So we look forward to Bittman's minimalist unedited cooking show full of mistakes in which he preps everything himself, in real-time, with unevenly cut onions.

NEW YORK – August 23, 2010 – This fall, Cooking Channel will air brand-new original shows from culinary superstars Rachael Ray and Bobby Flay, in addition to a full slate of series premieres through November. With a diverse menu of debuts, the network’s programming lineup is sure to satisfy any food-loving viewer. Rachael Ray’s Week in a Day, her first solely food-focused show in nine years, is dedicated to her fresh groundbreaking cooking concept for busy families, while Brunch @ Bobby’s celebrates Bobby Flay’s favorite meal of the week.

The fall premiere schedule is as follows:

My Life in Food
Premieres: Friday, September 10 at 9:30pm ET
From executive producer Al Roker, My Life in Food takes an intimate look at people whose lives have been transformed through food. From food allergies to obesity to the healing power of food, this show examines the importance of food and how it shapes our lives.

Rachael Ray’s Week in a Day
Premieres: Saturday, September 25 at 3pm ET
Her first show in nine years to be solely food-focused, Week in a Day is based on Rachael Ray’s bold new cooking concept for busy families – one day of cooking, five days of eating. Rachael shares her secrets for creating an entire week’s worth of meals, from scratch, in just one day. Using her recipes, strategies and tips, viewers will learn the tools to eat well every night.

Bitchin’ Kitchen
Premieres: Thursday, October 7 at 10pm ET
Hilarious, informative and deliciously demented, Bitchin’ Kitchen is based on the wildly popular web series. From one night stand breakfasts to dump ‘em desserts, chef-comedienne Nadia G. rocks the kitchen with her tasty techniques – all while wearing 3-inch stilettos. This bad girls’ irreverent take on life and food is wild, hip and totally unique.

The Minimalist
Premieres: Sunday, October 10 at 3:30pm ET
Based on Mark Bittman’s popular New York Times column, The Minimalist caters to the modern gourmet whose expectations are high, but time is limited. Filled with signature tips, factoids and recipes, The Minimalist mission is to get people cooking simply, comfortably and well.

Brunch @ Bobby’s
Premieres: Saturday, October 16 at 2pm ET
Bobby Flay is passionate about brunch – and Brunch @ Bobby’s celebrates his favorite Sunday morning menus. From a relaxed Hamptons kitchen, Bobby is the quintessential host - totally in his element whipping up dishes sweet and savory. From French breakfasts and Italian brunches to his own family recipes, Bobby’s take on these delicious recipes all reflect his creativity and love of the meal itself.

Kelsey’s Essentials
Premieres: Saturday, November 6 at 2:30pm ET
With a fresh look at cooking basics, Kelsey Nixon inspires the next generation of food lovers with her essential kitchen techniques. Voted “fan favorite” during The Next Food Network Star’s fourth season, Kelsey gives her tips on must-have pantry items, useful gadgets and basic cooking techniques. From roasting to baking, Kelsey delivers the basics – and encourages viewers to then make it their own.

United Tastes of America (working title)
Premieres: Tuesday, November 16 at 9:30pm ET
Hosted by Jeffrey Saad, each episode of United Tastes of America focuses on one iconic food staple - donuts, burgers, pizza – and explores it from every angle. The history, process, science and pop-culture significance of each item are examined, along with a look at how today’s hottest chefs are reinterpreting them in unexpected ways. Jeffrey was a leading contestant on season five of The Next Food Network Star.