Benihana on Mad Men: This Place Is Very Expensive

Share All sharing options for: Benihana on Mad Men: This Place Is Very Expensive

On last night's episode of Mad Men, "The Chrysanthemum and the Sword," Don Draper, ostensibly doing research to win a potential Japanese client, visited a Benihana Japanese Steakhouse restaurant in New York City. As with all things Mad Men, it's meticulously researched: This season, set in late 1964 / early 1965, indicates that the Benihana visited was, at the time, the first and only location at West 56th Street in Manhattan that opened in May 1964 (the second location would open in 1966, also in Manhattan, and the chain over the years would later expand to over 80 locations in 19 countries).

Information on the origins of Benihana and founder Hiroaki "Rocky" Aoki is slim, and most sources recycle what's found on the Benihana website. Aoki, born in Tokyo, Japan, the son of a coffee shop owner, was an alternate on Japan's 1960 Olympic wrestling team that then toured the United States. Offered wrestling scholarships from different colleges in the US, he eventually landed at New York City Community College and supported himself by working in an ice cream truck in Harlem.

It was said he covered the truck "with posters about his prowess as a wrestler to deter would-be muggers." Eventually he would earn an associate's degree in restaurant management in 1963. At twenty-five-years-old, he took his $10,000 in savings, borrowed the rest, and opened his first four-table “teppan-yaki” restaurant on 56th Street in May 1964. The name, Benihana, is the Japanese name for safflower. According to Don Draper, it was "very expensive."

The first six months were slow-going, with employees even getting jobs at other restaurants to make ends meet, but after a positive review by Clementine Paddleford, food writer and restaurant critic of the New York Herald Tribune, the place took off. (Sadly, the review proved difficult to find.)

The story of the expansion is boring in comparison to Aoki's love of adventure: He was an avid boat racer, a car rally racing fan, and hot air balloonist (he crossed the Pacific Ocean in a helium balloon in 1981). A Richard Branson/Donald Trump type. Also in 1981, he graced the cover of Newsweek magazine, the "Making it in America: Foreign Successes in US Business" issue.

There were family squabbles and lawsuits and Aoki was almost deported over tax evasion. New York magazine goes into all that in much more detail.

Mad Men depicts the changes in American society and culture of the 1960s, and specifically here, its evolving palates and new cuisines being introduced into the American dining scene — Don Draper needs to be taught how to use chopsticks, after all. New York City restaurateur Drew Nieporent credited Aoki with introducing Americans to Japanese food, "He was the first one who made it accessible for non-Japanese people to enjoy the Japanese experience... The key thing was he made it fun."

A look at a series of ads for Benihana in New York magazine from the 1970s reveals changing attitudes and the need to make the foreign accessible.In particular, see the "They Laughed" ad from the October 26, 1970 issue that talks about the hot pot sukiyaka as though it were the only common Japanese food in New York City at the time, and also refers to things as "gooky." (See higher quality versions here.) 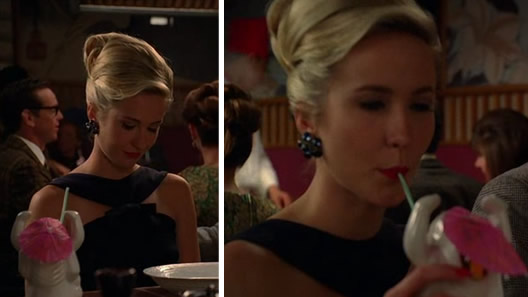 It's also worth mentioning the Hotei "laughing Buddha" Tiki Mug in Draper's date's hand — common at Benihana — for attention to detail.