Share All sharing options for: Titus Andronicus' Formula for Tour Dining: Keep it Local and Well-Caffeinated 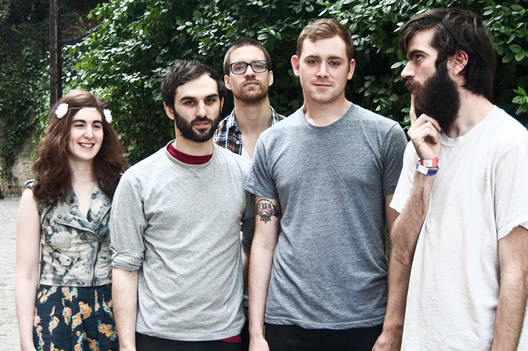 Titus Andronicus has quickly become one of the top bands to watch of 2010, garnering strong attention from outlets like Rolling Stone and Pitchfork. The New Jersey rockers' latest album "The Monitor" put their raw energetic sound on the map and even led to a recent performance on Late Night with Jimmy Fallon. I caught up with founding member, bassist and vegetarian, Ian Graetzer, just before he hit the road for another month-long US/Canadian tour to talk about the trials and triumphs of eating local.

You guys have had about three weeks off after a whirlwind US tour and are about to hit the road again this week. Have you been hitting up any local favorites before you leave again?

Yeah I have some favorite spots. There's a pretty awesome diner by my house in Prospect Heights called Tom's Restaurant. Also, no one can deny Vanessa's Dumplings, that's a great place to eat in the city. And when I was a bike messenger I used to eat at this Vietnamese sandwich shop called Saigon Vietnamese Sandwich Deli on Broome and Mulberry, it's next to this firehouse and is pretty awesome.

What's your #1 dining priority on tour?

I am a total coffee snob and everyone in the band knows it and gets annoyed by it sometimes. But I mean we were just all drinking crappy gas station coffee and I just got to a point where I was like I should be drinking the good-tasting coffee. It's a better experience than coffee-flavored water that's at every gas station across America, and over time, trying different coffees I became kind of intense about it. I usually get an Americano but the drip coffee at my favorite place in Brooklyn, The Glass Shop, is so good. It's probably the best cup of drip coffee I've ever had, just really rich beans, kind of a super shot. Just feels like there's a lot more energy that this coffee is putting out than at other coffee places.

Do you guys have any cities you're looking forward to visiting for the good eats?

Yeah, San Francisco for their amazing Mexican food! That city has never let me down on a bad burrito ever. There's this place El Metate that's pretty of note that a lot of my friends go to in San Francisco.

Any regions that leave something to be desired in terms of food?

I'd say a lot of Midwestern cities. There are a lot of cities where economically the bottom has fallen out and so there's not a lot of local good food. It's just like factory-made robot-style, all their breads are like heavily manufactured, nothing seems really made out there. I'm sure there are some places but in smaller Midwest college towns there's a lot of generic gross assembly line type places, 'Jimmy John's sandwiches' or whatever standard chain there is. It becomes a chore to try and eat when we're out there...

So do you guys make it a priority to eat local on tour? How do you go about it?

For sure. Usually we sleep at people's homes so the homeowners always point us in the right direction. Sometimes I do use my iPhone to find local diners and things like that, but really, the locals know where all the best places are.

What about eating locally when you're home in New York?

In New York, I'm part of a CSA: 'Community Shared Agriculture' thing. It's an organization that has been active in the city since I think 1995. I'm not 100% sure when it begins, maybe July, and ends around October. But basically you sign up for it and pay about $12 a week and all the vegetables you get are grown at this farm in upstate New York. And only the vegetables from this farm go to CSA, everything grown there is specifically to service those a part of the organization. And every week you get whatever is in season. Sometimes for many weeks you'll just get the same type of lettuce, but then tomatoes will ripen and you'll have tons of tomatoes.

It's pretty nice because it makes you realize what it would be like if the sh*t in the world hit the fan and we all had to start growing our own food locally instead of importing from other countries. It's a nice reminder that seasonal eating is a real and maintainable thing... that we'll probably have to do in a soon to be post-apocalyptic world, haha. And it does make you realize that local farming dependent on your climate is not an easy thing.

So when you're home do you tend to have the majority of your food provided via this organization or do you still find time to sample local restauarants?

Well every week we go and pick up the vegetables and the woman I work with will cook a pretty serious meal with those. And I think for the most part that's better than any fancy dining we could drop a lot of money on, and we do it every Tuesday.

Do you guys ever indulge in local street food on tour?

Oh yeah! Portland is probably the best food cart city I've been to. The Mexican food carts downtown are pretty awesome — I feel like we just eat a lot of Mexican food on tour. But yeah there are a lot of vegetarian stir fry carts as well, a lot of tacos... a LOT of tacos.

People seem to feel very strongly about their choice of tacos, do you think the best taco is out there in Portland or do you have another favorite?

Well I can tell you my favorite taco in Brooklyn is Papacito's in Greenpoint. They usually have a pretty sweet happy hour of delicacy tacos between 12 and 4, which is great because I work up there so I usually go there for lunch. They do all types of tacos but they have great fake meat and veggie tacos, but awesome places like that end up being a trap because you'll end up going there all the time... I can't stop though because it's amazing!

Okay so let's go for the lightning round!

Titus Andronicus' latest record "The Monitor" is out now on XL Recordings.