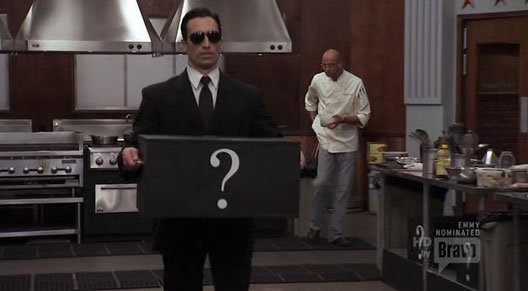 Far be it from me to gloat, but I was right and everyone in the entire world was wrong and you all owe me a hand-written apology. And the apology better be signed with your tears because I can only be sure it's sincere if you were weeping while you wrote it. What was I right about? All season long I have insisted that the arguably fiercest competitor Angelo is a spy. For me at least, the signs have all been right there on the surface: an indeterminate accent paired with a hardly believable tale about being born in "Connecticut," references to known spy-haven Monte Carlo, and cooking skills obviously learned while abroad in China, a Communist paradise. Worldly Angelo has remained cool under pressure and ruthlessly efficient at manipulating the competition via a practice known in the intelligence community as PsyOps. Tamesha, Angelo's "friend," was his first victim, and we can only assume Kenny has Angelo to thank for last week's meltdown and surprising elimination.

My theory didn't catch on. After my second or third recap, I believe a commenter wrote, "What's with the stuff about Angelo being a spy? I don't get it." No, you wouldn't. That's why he's so good at what he does. He's working on so many levels that even I can barely keep up. But last night, as our chefs traveled to the headquarters of the Central Intelligence Agency to cook for Leon Panetta himself, Angelo's ruse came apart. First, he revealed a key personal detail: his fiancé lives abroad in Russia. Yikes, Angelo. Amateur hour. Perhaps his betrothed is Anna Chapman? (For those who don't know, Chapman was a Russian seductress and alleged spy living in America. She was arrested and returned to her homeland in a Cold War-esque human trade between the world's last two remaining superpowers.) We can only assume that's who she is and imagine for ourselves how hard it must be for Angelo to be away from her. 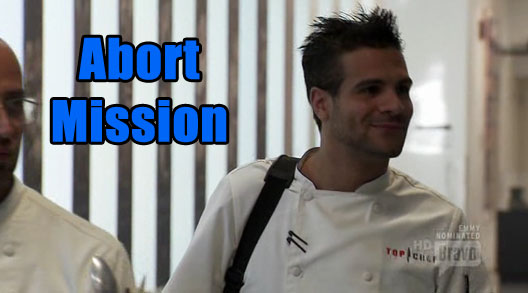 But I thought Angelo would have been ecstatic to find himself inside the CIA's headquarters, just a poisoned mushroom duxelles away from eliminating the Agency's director himself. Apparently the pressure was too much for him. Perhaps he had larger plans, plans that extended far beyond mere Langley, and therefore being inside the hub of America's intelligence machine put him at too great a risk. It showed in his cooking. He was unfocused, sweaty, nervous, and despondent. 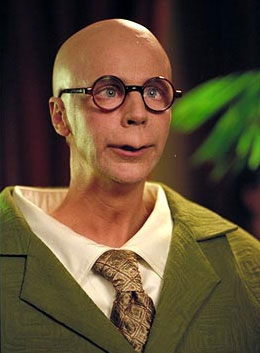 The Elimination Challenge could not have been more suited to Angelo's skill set: take a well-known classic, and disguise it. The intersection of creative cooking and covert operations? A challenge MADE for Angelo, aka Pistachio Disguisey. (FYI: that is the name of Dana Carvey's character in the Master of Disguise, a film I can only imagine serves as a major inspiration for Angelo.) Yet he flopped entirely, evacuating Beef Wellington of all its elegance and difficulty and serving it stacked on a round of frozen puff pastry. "The tenderloin will be like little pepperonis on the puff pastry pizza." Jesus, "Angelo." Get it together. Your handlers are watching, and they will not be pleased. The cracks in Angelo's armor were not enough to send him home this week, though. He will live to spy another day.

Meanwhile, the rest of the episode happened. As I know you all love rules, ingredients and results accurately recounted, let's get to it. 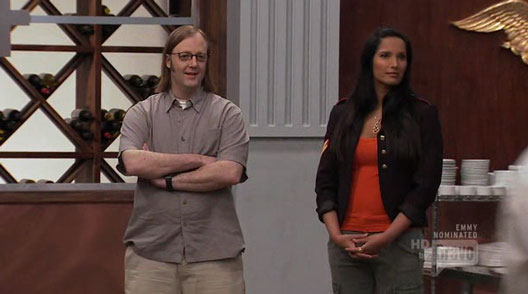 Wylie Dufresne and his molecular sideburns will be judging this week's Quickfire. They are surrounded by black boxes with question marks on them. What's in the box?! Depending on the type of person you are, that sentence will either remind you of improv comedy warm-ups, or the climax of the film Seven. Both are very depressing. The chefs all have forty minutes to cook a dish with the ingredients in the box and win themselves $10,000. The catch is that there are more boxes, and more ingredients, to come. Everybody wants money! Angelo needs it to get his Russian fiancé back to America and sort her "visa issues" out. Sure.

The first box contains lima beans, hominy, and a fish. The chefs are frazzled. They seem overwhelmed by even getting the can of hominy open. My first thought, when presented with a bunch of random ingredients, is to make a stew. Make a stew! Or a soup. Those are two dishes where you can hide or connect random flavors with a broth, right? I don't know. I am not a Top Chef. I am just saying.

A gentleman in a black suit and sunglasses, looking straight out of the hit film Matrix: Revolutions, shows up with another black box: squid and black garlic. Kelly's never used black garlic. She says it tastes smoky, a little sweet. Before the cooks even realize what's up, another box arrives: ramps and passion fruit. That is an odd combination. A real shame they missed an opportunity for a terrible D.C. pun: "Chefs, in this challenge, the judges will be saying, 'Oh, your ramp arts we watched.'" A real shame. The final box: jicama. I bet all this food will be weird.

Wylie's least favorites are Alex and Amanda's. That makes sense. They are both not smart and don't seem good at cooking, so I understand Wylie's thinking here. His favorite dish? Tiffany's fish stew. 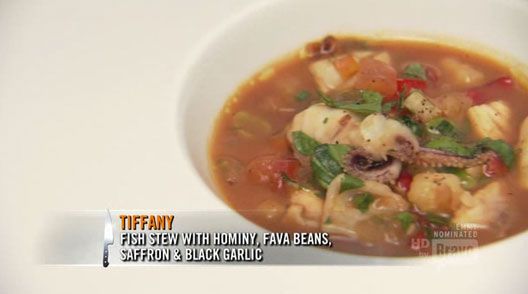 Thank you for listening, Tiffany! Thank you for reading my recap that I wrote four months after you filmed this. This is her second high stakes Quickfire. Your wedding will be almost TOO nice, Tiffany. Now I am worried. People might get TOO drunk at it.

As mentioned above, this week's Quickfire is to disguise a classic dish and serve it to the CIA. To be in the CIA, I believe, you have to pass a lie detector test saying it's been years since you used drugs. All chefs would fail, I imagine. From what I've heard. Alex would especially fail. But let's be real: drug use would not be in the top 30 list of reasons why Alex can't be in the CIA. In the Top 10 would definitely be "Amanda thinks you are a great cook and old and wise." Amanda says all these things about Alex. Again, it makes sense, because every decision she makes is wrong.

After some very boring shopping and prep work, the chefs head to the CIA Headquarters. Angelo is noticeably jumpy. This challenge is tricky, because it is unclear whether disguising your dish so well that no one can identify it is a good or a bad thing. The cooks are serving for Padma, Tom, Eric and Wylies, along with Leon Panetta and an army of last-name-less CIA employees. They are all probably carrying guns, or Neuralyzers. Those things from Men in Black.

Amanda is worried, rightly, that her French onion soup isn't disguised enough. I can understand why she feels that way, because it is still a soup and only barely looks different. "Helen Keller could guess what this dish is." Well, yes, Amanda, because taste is one of the senses she did have. Plus, she wasn't an idiot. Did you know she wrote a book, Amanda? I bet you couldn't write a book.

Kelly has rice problems to go along with her kung pao shrimp. She is from Colorado, a high elevation, and has trouble with cooking times. Tiffany though, already having been proven the best, assists her with the rice then helps her plate, because she wants to compete with people at their best. You are at all of our bests, Tiffany. 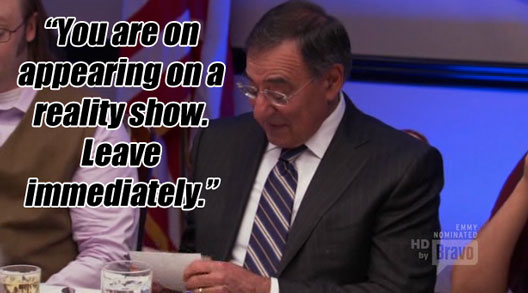 In the middle of the meal, Mr. Panetta gets a note and has to leave suddenly. How dramatic! Fake? Probably fake. Or, the note said, "A known SPY is in the building. Evacuate immediately." Either way, we are left with Leon's crew of VERY charismatic one-named employees, like Tim. 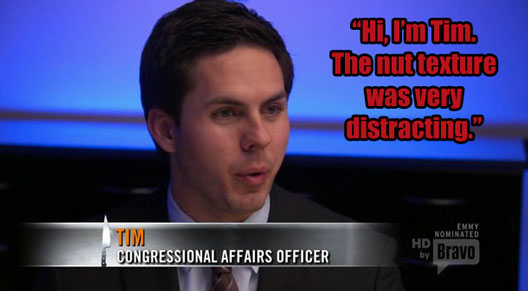 Very interesting, Tim. You are pretty much the main character on this show. All the other people at the meal seem very upset that Mr. Panetta had to leave. Apparently it's very common. Common when? When the director of the CIA is appearing as a guest on a cable reality show? Take that, terrorists. We're ready for whatever you have to throw at us.

Ed's inside-out cordon blue, Kelly's kung pao shrimp soup, and Tiffany's deconstructed gyro all end up on top. Tiffany is having quite a run here! The judges were all astounded by her gyro. She wins the Elimination Challenge and a trip for two to Paris. Now her lavish wedding also has a honeymoon paid for! This show is Top Pay For Your Wedding. 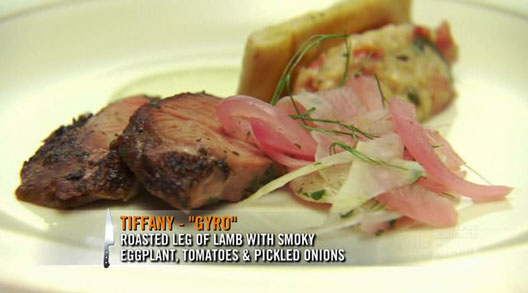 Ed is disappointed. He had said earlier his girlfriend was bugging him to go on a trip and winning this means he could drag her to Paris. He sure talks about women in an obnoxious way! Now that he lost this challenge, he says his girlfriend will be upset. She will probably be more upset when she sees you spend the entire season flirting with an engaged woman.

Alex, Amanda and Angelo are on the bottom. Alex's "veal parm" was disgusting. The veal was tough and Tom says the tortellini were no better than out of the freezer section. Amanda's soup wasn't disguised at all, plus it wasn't that good. There was a sweet oxtail marmalade? Angelo's dish disappointed everyone, especially considering his potential. Eric said it made him "kind of sad." You can hear Angelo's heart break in two right after Chef Ripert says that. 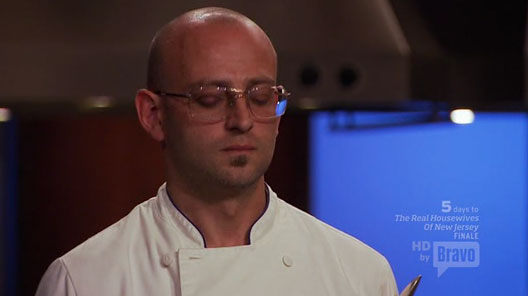 But Alex, at long last, lands squarely on the bottom and gets sent home. Very impressive he lasted as long as he did! When he makes his announcement to the closet, the other chefs can barely contain their excitement. Kelly, who had ignored him and his kung pao advice the entire day, tries to hide her desire to celebrate his exit.