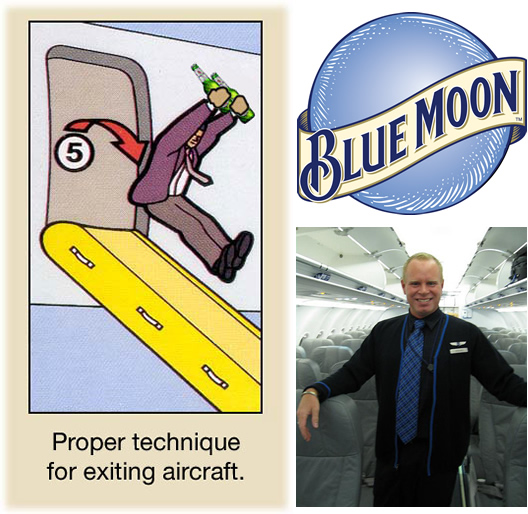 Last week, flight attendant and American folk hero Steven Slater allegedly grabbed two beers from the airplane's galley before making his badass escape down the emergency slide, and the question on everybody's mind was: What kind of beer? Leave it to TMZ to find out: It was Blue Moon, the unfiltered Belgian-style witbier made by the Molson Coors Brewing Company. Blue Moon is a recent addition to the airline's food and drink menu and sells for $6/bottle.

A golden marketing opportunity (with heady notes of coriander and orange peel)! But sadly, Blue Moon/Molson Coors wants nothing to do with Slater. A rep told TMZ, "We have not been asked nor do we plan to promote our brand in this manner for the sake of publicity. There were some very serious allegations made surrounding this incident and our company is not in the business of trivializing public safety for publicity or potential financial gain." Surely sales will skyrocket.