I Ate. I Prayed. I Loved, or How I Learned to Stop Worrying and Love the Rom

Share All sharing options for: I Ate. I Prayed. I Loved, or How I Learned to Stop Worrying and Love the Rom

On Saturday, I saw Eat Pray Love and I was not alone. After The Expendables, a plastic soldier flick featuring a who's who of has beens, Julia Roberts' feel-good life-affirming travelogue came in second in the box office take. It was playing as often as the weather on 1010 WINS and yet, there was a line at the theater stretching up Third Avenue. I took my place behind a couple of girls whose perfume was too strong and whose toes were too painted (see photo below as evidence). Fortuitously, when we finally entered the movie theater, it was only half-full. I'd say 70% were groups of women, 15% were woman and man pairings (the man looking plaintively at other men in similar pairings), 5% were solo women, and 10% were bros, just, you know, seeing a flick on a Saturday. Not a big deal.

For those of you who somehow have avoided it, Eat Pray Love is adapted from the book by Elizabeth Gilbert, by all accounts a capable writer. Gilbert had a nice life, got a book deal, got a divorce, had a breakdown (rather pleasant-seeming in the film) and took off on a tour of Italy (Eat), India (Pray), and Bali (Love.) Since I hate Julia Roberts — ever since I saw her brother in some soft-core porn, every time I see her face, I see his face and it freaks me out — I didn't have high hopes for the movie. Also because of the movie I didn't have high hopes for the movie. 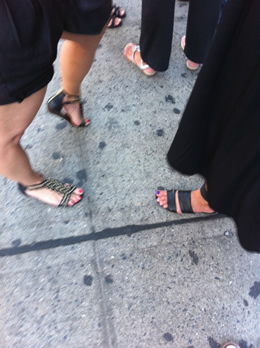 Of course, it's mostly the Eat part that concerns us here. Gilbert goes to Rome and learns to love herself again by eating a lot. She eats in houses. She eats in on the floor. She eats in a café and circles the word obesità in the paper she's reading and then there is a montage of her eating pasta. Food stylist Susan Spungen — with whom we'll run an Eaterrogation tomorrow — gussies up the pasta pretty good for the money shots.

There's one particular shot of a stuffed zucchini blossom that spurts ejaculatory cheese upon bursting open that's like an Arcimboldo meets Courbet's Origin of the World. At a certain point, Gilbert heads to Napoli and eats pizza and a little fat girl gives her the finger and it becomes this moment of self-acceptance. Somewhat disappointingly, it seems Italy has a monopoly on enjoying food.

Though the first part of the movie is based in New York, the only edible moment is when James Franco — sitting on the steps of his unrealistically large East 5th Street studio — feebly attempts to woo Gilbert with this charmer of a line, "If you stay, I promise we can order in Indian every night." Hmm, a year in Italy, Bali and India, or sitting in an East Village walk-up, smoking weed and eating shitty panak paneer. But that's just a quibble.

So anyway, the movie was good. I mean, what can I say? I laughed. I cried. I learned how to love. Well, at least I laughed. [It'll take a lot of therapy for me to learn how to cry.] It's hard to imagine Julia Roberts having a tough time doing anything because you can't see Julia Roberts' face and not think, "This is a woman who people think is beautiful and I bet she never has to wait in line anywhere and I can't believe she was married to Lyle Lovett!"

And yes, the idea that she travels around the world and gleans only those trenchant parts of foreign cultures that feed into her self-affirmation while completely ignoring the downsides of, for example, Italian dolce far niente (a nation of paralyzed corruption) and mammoni (Mamma's boys) or adorably toothless Balinese medicine men (lack of national health care) is infuriating. But! I still fucking loved it. Javier Bardem — despite a truly horrendous Portuguese accent [NB: They do not say Nova Jork in Portuguese.] — is the most handsome man in the planet. James Franco is sufficiently meta in his role as a bad actor to be enjoyable. Richard Jenkins performance as a heartbroken former alcoholic in India is worth the $12.50 and the stench of lilac perfume.