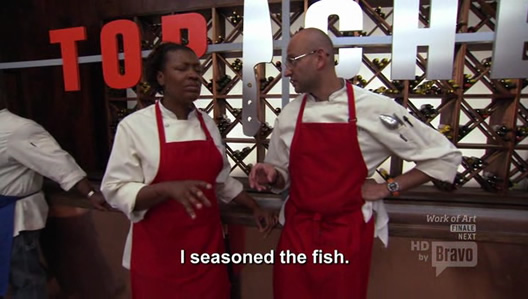 Hey Top Chef: How about a truce? Let's pretend the entire season leading up to this week's episode never happened. Let's pretend that John, the incredible Earth Mother with a living, breathing prehensile ponytail hadn't been eliminated in the first freaking episode. Let's just imagine we haven't spent eight weeks having to listen to words come out of Amanda's mouth. ("Sometimes I, like, see a fork, and I can't even think of how it is I am to use it?") This week is Restaurant Wars, a grown-up reality show episode, and every boring installment of Top Chef leading up to it this year was a juvenile when it sucked, so therefore its records are sealed. Welcome to the first episode of Top Chef! There are eight chefs, and it's time for Restaurant Wars.

As is always the case when we're this far into a season, this week's Quickfire Challenge promises no immunity, only money: Ten grand to be split among the winning team of four. Here is the most fun part of every week's recap, the part in which I recount complicated arbitrary cooking competition rules. The two teams each have forty minutes to cook one dish. The catch? It's a blindfolded relay. As the first chef on each team works in the kitchen, the three chefs waiting can't see what's being done. The next chef in the relay has to figure it out once he or she arrives at the station. In a disappointing twist, the chefs are to remove their blindfolds once they start cooking. It seems a wasted opportunity to present the chefs with so few chances to cut their arms or heads off. While I of course don't want to see anyone get their head cut off, all I'm saying is I'd love to see someone, anyone, get their head cut off.

Kevin gathers his Blue team: Kenny, Kelly and Amanda. Ed's the Red team captain, and his first choice is Tiffany because uh no doy. Like no doy for real. "I choose Tiffany because she is a good cook and a great lady and she smells nice and wears dresses and her skin is very soft and when she looks me in the eye my problems melt away into a puddle on the floor but in that puddle I can see my reflection but it's actually our reflection, Tiffany and I together, but we are much older, like maybe the reflection is actually a glimpse into our future? And I can see that we have grown old together and raised a family and are really truly happy, and even though Tiffany is much older, and her eyes are weary from a life of working hard and raising our children, she is still so beautiful. We were always enough for one another, no matter what else in the world was going wrong. I knew I had Tiff and that was enough. More than enough." Angelo and Alex also join the red team.

Tiffany and Kenny cook first for their teams and both have it all worked out. Kenny gets some mustard cream sauce going, while Tiffany lays out the fish. Each relay member has a full ten minutes, so I can't imagine anyone on the Red team but the anchor chef, Angelo, will need to touch that fish. Oh wait, what? Alex is up second? I bet he can't ruin anything by going second. Just kidding. He decides to salt the fish, heavily, because twenty minutes from now will be just enough time for the salt to melt into the flesh of the fish and render it invisible for Angelo. Cool dude. He's got a cool-looking head and he makes good decisions, that is what I am always saying. Tiffany bites her nails and shakes her head at how stupid Alex is.

Over on the blue side, they are very organized. Each member of the team, as they enter the kitchen blind, seems to immediately understand what's going on as things are laid out very clearly. There is a narrative! Angelo isn't so lucky on the Red team. He resalts the fish but then tries to brighten it up with some fresh herbs. It is probably too late.

Our most important DC celebrity yet comes on set to judge the two dishes: Speaker of the House Nancy Pelosi. Nice get, Bravo! She is very unnatural on camera. She twitches a lot and blinks like a robot thinks humans should blink. "There is nothing more natural in the human world than keeping the whites of my eyes moist via the act of blinking! I love that I was definitely womb-born with lids over these lenses I MEAN EYES." She claims she has been a foodie for a long time. Sure, whatever. She tastes both dishes and makes a face. 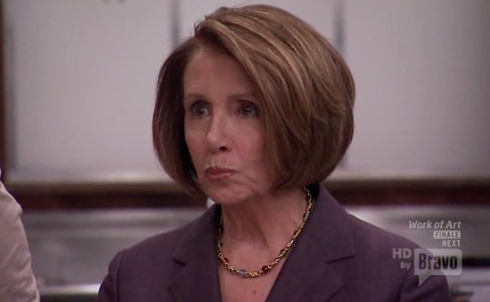 She hedges her comments on both dishes in an annoyingly political way. They are both perfect but only one can be the most perfect. Something something local food because she's from San Francisco, the home of the first Top Chef. She picks the blue team because Alex over salted the red team's fish. While Alex is obviously trying to blame her, I enjoy how quick everyone was to not even consider how maybe Angelo should have double-checked that the fish wasn't already seasoned. Whatever. Alex's head is stupid. 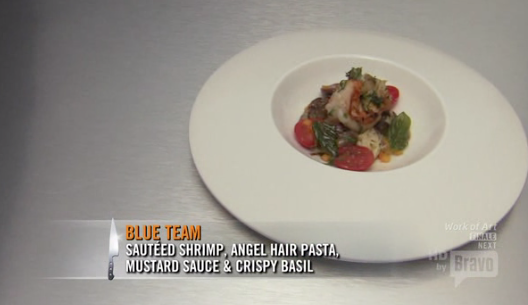 Unfortunately for the Red chefs, these Quickfire teams will also be the teams for an American tradition: Restaurant Wars. (I am misusing the word "tradition" the way a reality show might.) This year they are cooking at Redwood Restaurant. And thank god, that restaurant comes predecorated. "Padma, may we go out and purchase some scented candles to add to the table?" No, you may not. Three courses, two dishes per course, and everyone must be responsible for at least one dish. Somebody works the front of house. (Such staccato sentences. I am the James Ellroy of reality show rule description.)

Very exciting news for those of us in New York: this week's guest judge is Frank Bruni, former restaurant critic for the New York Times. He also wrote a memoir called Born Round that is about how good pasta is and how hard it is not to eat all of it in the world. Kelly says, "Frank Bruni is notorious for being the toughest critic ever." Really? I don't know if that's true. Oh, also some guys from Terlato wines will be at the dinner. COOL. Glad I know that. 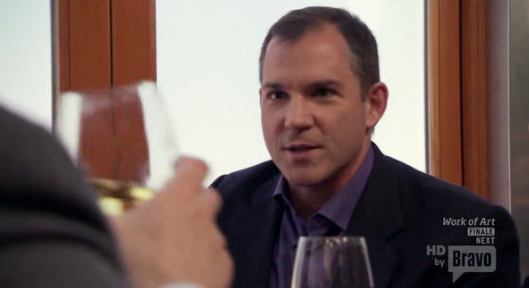 The Blue team's strategy: make a list, plan, delegate, communicate and stay organized. The Red team's strategy: exclude Alex as much as possible. Both are smart strategies. A not-good strategy is for the Red team to name itself Evoo (Extra Virgin Olive Oil). Yuck! A terrible name. Blue team calls itself Twenty One 21, the address of the Top Chef house. Luckily this show it is not Top Naming Restaurants.

Alex "conceives" of a lamb dish for his team, then Ed and Angelo ignore it. Angelo instructs Alex to butcher the meat, and then Angelo takes the job away from him. It's all kind of uncomfortable how much they disregard his (stupid) feelings. He quietly takes it. He at least gets to clean Tiffany's fish, but he messes that up as well. She later has to descale and debone it in the kitchen. Good job, Alex.

The Red team thinks they have it all figured out: They keep him out of the kitchen by cramming him into the front of the house. How much damage could he do out there? A lot. He is a complete psycho to the servers, barking orders and second-guessing their decisions. Unlike Kelly, who works the front of house for the Blue Team, he foregoes allowing them to taste the food before they serve it. What a garbage head. I am looking at my notes and I have "garbage head" down in reference to Alex, twice. It's true.

Once service starts, Alex becomes even more insufferable. He seems about a second away from throwing up on the judges' table. He is shaky, he stutters, and he calls their lamb "pork." The food is hit-and-miss, but the service is a lot more miss. I think Tiffany's crudo was kind of gross? There was a lot of food to keep track of.

Over at Twenty One 21, Kelly has things a bit more under control. She has an awkward charisma. Kenny is keeping things cool in the back, but his two dishes, a beet salad and a goat cheese dessert thing, both fail hard for the judges. I don't think any dish this season has repulsed the judges more than that hunk of goat cheese. It was reminiscent of CJ's broccoli dish from a few years ago. In reference to Kenny's beet salad, Tom is reminded of the quote about how before leaving the house a woman should take one thing off. Bruni yells, "Coco Chanel!" Amanda overcooks her meat and slices it too thin.

Despite the Blue Team's organization and confidence, the Red Team is called before the judges. They win! A big surprise considering how hectic things got during service. (Angelo sweats a lot.) Ed wins a giant bottle of wine and a trip to the Terlado vineyards in Napa.

The judges tear the Blue Team some new ones. Amanda's sauce can't overcome her poorly cooked meat. Bruni: "it's like a nice pair of shoes with a bad suit." Kenny's beet salad seemed "through the guise of Hamburger Helper." Faced with all this criticism, the Blue Team loses it. Alex did nothing, he conceived of nothing, and he deserves to be going home. The judges are skeptical and slightly surprised by the outburst.

Back in the Gladware closet, everyone tears into Alex. Kevin is so mad! Teams are heated! It is uncomfortable because the entire discussion is about how bad a cook Alex is and how his teammates didn't let him do anything. Angelo meekly says to Alex, "there is no need to justify anything." Yikes.

But the judges aren't going to change any rules just because of some complaints. One member of the Blue Team is going home. And it's Amanda, right? Amanda's going home? She just made one dish and it wasn't great? Nope. Kenny. Kenny the beast, the king of duos, is headed home. A true shocker. What an episode! So much intrigue, and a top three contestant headed home startlingly early. Oh yeah. I love this show a lot. Thanks Top Chef! Bye Kenny. 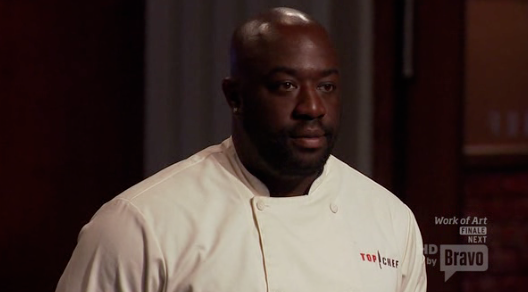