Top Chef D.C. Episode 4: This Episode Is For Babies

Share All sharing options for: Top Chef D.C. Episode 4: This Episode Is For Babies

Oh boy. Woof to this episode. Let's get that right out of the way. Watching last night's episode of Top Chef D.C. felt like doing homework, homework assigned to you in a class you didn't even want to take in the first place. But, a corrupt judge MADE you enroll in the class as part of a plea bargain you took after getting arrested for trying to hold his daughter's hand at a picnic. (I don't know a lot about law.) What a complicated simile, right guys?

Well last night's episode was even more complicated than that simile, but at least my simile held the promise of some KISSING. Not Top Chef, though. The episode was called "Room Service," probably because the producers were lying in their beds at the Hilton Hotel and then called down to the front desk and said, "Can you please send up four orders of Lynne clearing her throat and chewing ice and boring holes in the camera lens with a death stare and also please two orders of piping hot parsnip soda? Oh you don't have any parsnip soda? Well whatever else you have that isn't fun but also very complicated would be fine." So many rules, a marathon of cooking, and two good chefs eliminated due to an oddly structured challenge.

I am not saying last night's episode was short on drama. It was very tense during the final Judges' Table! But only because that strange triple-elimination-round-robin-all-day-cooking-challenge resulted in some pretty decent chefs guaranteed to go home. It was too painful for this early in the season! I don't care about anybody yet, but this show made me mad at it for forcing two off in such a clumsy manner. And it's not that TWO were sent home that gave me pause. This early, with this many chefs left, I think they should have sent NINE home. "Back up the knife truck, boys." It was just handled so sloppily. Like, Amanda and Stephen, the dream team (if you dream about pills, cold sores, and not having lips), won the Breakfast segment of the Elimination Challenge, and we didn't even see what they cooked! Huh? "The chefs so nice we edited them out of the episode twice." You can do better, Bravo. And on the eve of your Emmy nomination for Editing no less! Oh well. The cinematography of last night's episode was breathtaking, I guess. You earned it. 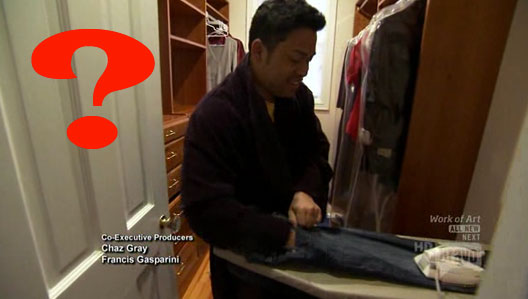 There's no guest judge at the Quickfire this week, just Tom and Padma. They remind the cheftestants how achingly fertile they are by bragging about their young children, eight months and two months old, respectively. (Is someone on set still giving Padma olive oil perineal massages? Real question. I hope he wasn't laid off! He'd be the true victim of this downturn.) And believe it or not, Tom and Padma also feed their babies food. How novel! This week, the chefs must satisfy all four of them. And you can bet that satisfying Padma makes this a high stakes quickfire. (High stakes? We are not in Vegas anymore. Wouldn't we be better off calling it a Chairman of the Appropriations Subcommittee Quickfire? Or something else similarly TERRIBLE?)

And here's where it begins to get needlessly complicated. ("Begeins." I am recapping a reality cooking competition TV show.) Each chef has to cook a meal for both Tom and Padma AND their babies. Sure. Will their babies be in the kitchen judging? Because that would be wonderful. No, of course not. The chefs will make a baby-food version of the adult meal (what) and then Tom and Padma will try both. Maybe I'm crazy but I do not think adults are the best judge of what babies like. There is a good reason that once our teeth work we stop eating baby food. We don't like it and it's not for us. Also, babies are really simple, and I am pretty sure they are not tickled or flattered to be eating a baby-version of whatever their parents are having. "Oh you are having honey-glazed pork tenderloin over cheesy polenta and so thusly you are feeding me, your spawn, a pureed and liquified honey cheese polenta? You shouldn't have! No, really, you should not have. All I ever want to eat is Cheerios and mashed up bananas, if I feel like eating at all. Don't try and be clever. My mother is Padma Lakshmi and there's only obviously one kind of food I want and it doesn't come from a jar. Also, what is that scar on your arm from? It is strangely hypnotic." 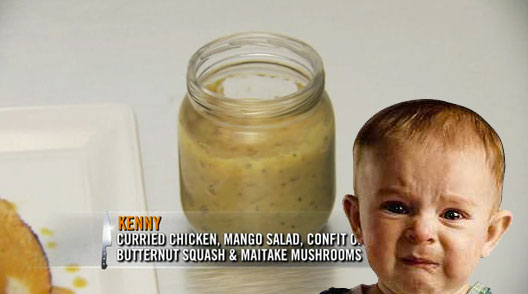 Tom and Padma will each pick winners and each winner gets $10,000. They each pick winners and they each pick losers? You are making my brain hurt, Top Chef. Arnold says that if he wins the money, he will stop giving AIDS to kids in Thailand. I kid, he says he will give it to a charity that focuses on that, which is very noble. But also: does Arnold plan to give all his Top Chef money and winnings to the charity too? Does he tithe a large portion of his salary? All I'm saying is it's a little disingenuous, in the middle of a reality show sponsored by Dial NutriSkin, to say you are giving one of your (potential) prizes to charity. Alex says he will spend the money on a hooker and an eight ball, which is gross only because of how true it seems.

On the bottom: Timothy, Alex, Kevin and Kelly. Kelly left a lemon seed in her baby food! A baby would choke on that, says Padma. The judges liked Lynne's dish a lot. "All my kids have four legs," she says. Oh my GOD are you saying--oh, she means cats. I mean, maybe she means dogs, but let's be real: Lynne means cats. They like Angelo's, too. But Tom's winner is Tamisha and her homemade licorice oil. "Holy shitballs. I won ten thousand smackers. How YOU doing?" She says that! I like her a lot. Padma picks Kenny and Angelo fumes. Kenny has a very nice and heartbreaking story about raising his young daughter alone and it makes me happy he won. I have feelings too, guys. 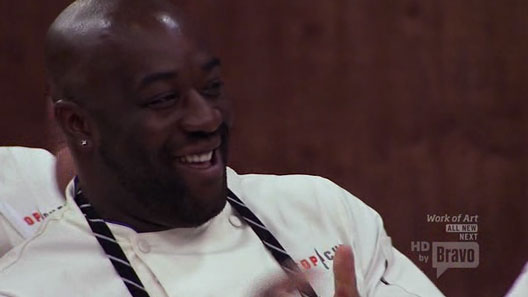 Beth Scott, who has the barf-inducing title of VP of Restaurant Concepts at Hilton Hotels, presents the Elimination Challenge. The chefs must prepare a new signature menu dish for the hotel that is healthy, sophisticated, and easily executable. (Not said but later hammered home by the judges is that the meal must travel well, for room service.) The winning team (the chefs will pair off) will get their dish on a Hilton Hotel menu. What fun.

The winners and losers will be decided in a confusing and tiring three meal cooking marathon. Everybody cooks breakfast, two teams win and don't have to work the rest of the day. The remainders cook lunch, another two teams win and get to chill out. Finally, the last three teams cook dinner. One of those teams will go home! 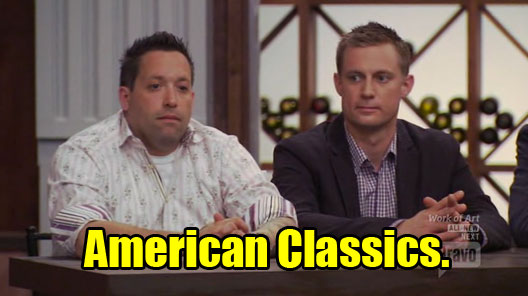 In addition to Beth, Tom, Padma, the the judges this week are Eric Ripert, former contestants Spike, Mike Isabella, and Bryan Voltaggio, and some lady named Nora who owns a restaurant named after herself. Look, I realize, after doing some research, that Nora is a well-known restaurant in D.C., and it's organic, but there are already seven judges on this episode. I do not know or care who Nora is and I certainly don't like looking at her face.

From here on out, the rest of the episode is a mess. The editors barely managed to communicate what was going on, and that's their full time, Emmy-nominated job, so don't think I'll be able to manage. Lots of people cook! Tensions run high in the kitchen. People run out of time, or almost run out of time. There's a disagreement over an oven. A chef thinks a dish is good but that footage is contrasted with the judges not thinking that dish is good. Former Top Chef contestants try to sound very smart at the judging table and act like they are now peers with Tom and Eric, which they are not. Et cetera.

One funny thing, and there are so few this episode, is that when the winners are announced after each meal, there is no feedback given to the losers. So these cooks, who are used to getting immediate critiques, good or bad, on the meals they prepare on this show, are left wondering why they lost and boy oh boy do they get frustrated. They are so bad! Sorry, losers.

Amanda & Stephen and Tim & Tiffany win breakfast. Angelo & Tanish and Alex & Ed, despite their disagreements and poor platings, win lunch. On to dinner, the meal that will send people home.

What a tough way to round this out. Cooking dinner we've got Kenny and Kevin, Lynne and Arnold, and Kelly and Andrea. Each team has at least one very good cook (I've warmed up to Arnold), which means that at least one very good cook will go home. Plus, the Elimination is only being judged on this final meal, though it's completely possible that each team will now, for dinner, make a great meal. And that's what happens, making for a stressful conclusion. Kelly and Andrea make short ribs and polenta and get to go to Europe, or something. 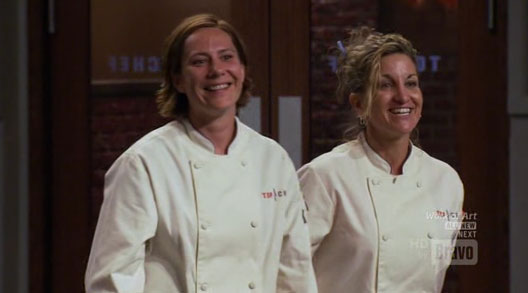 We're left with Kenny and Kevin and Lynne and Arnold on the bottom. The judges try to act mad, but really, both dinner dishes seemed great. Lynne's pasta was a bit undercooked, and Kevin should have glazed the short ribs some more. But that's it. And TWO people will go home for this? So many knives packed up. In the end, mildly undercooked pasta and what I imagine is a LOT of consulting with producers results in Lynne and Arnold being sent home. A shame. What a mess of an episode. You owe me, Top Chef. I am spent. 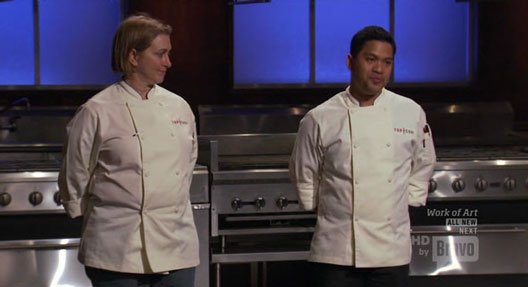