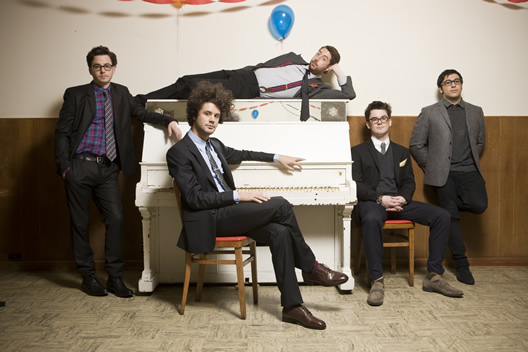 If you've attended any major music festival in the last two years or just own a TV, chances are you've heard (and probably swooned over) Passion Pit.

Judging by your tweets and tour pics, you seem to be the foodie of the group — is that true?

Well, we all like to eat but I probably take it a little further than the other guys. I mean I just really love burritos. I actually had a burrito eating contest one time with our merchandise guy, Sal. One day I just said, 'Ya know what dude, I could totally eat more burritos than you. Let's do this.' We were playing a college show in St. Louis that happened to be sponsored by Chipotle so all the kids putting the show on heard about it and brought a case of 24 burritos up to this classroom. We went for it right there. I ate two and a half burritos in 20 minutes and got so sick. By the end of it my shirt was off, my pants were unbuttoned, rice and sour cream were all over my face and chest, and Sal ended up eating like three burritos and was totally cool.

I'm always talking about how I love tacos and Mexican food so much. And I just got the best book ever! We were in Houston at this bookstore and I found this book called Tits, Tacos and Ass.

Wow, that sounds like everything you'd ever want in life!

That's exactly what I said! I was so excited that I called my girlfriend at work and was like, 'I just found the best coffee table book ever that completely encompasses everything in my life.' It's literally like American Apparel style photographs of women and then tacos next to them. But the important thing is to not mix the two, they need to be two separate entities on a landscape page: here's a woman, here's a taco, and she's not going to touch the taco. I had the book for a while on tour and started to get really analytical about it, like, 'I feel like they really did a good pairing with this type of meat with this type of girl.'

You guys do seem to be on tour nonstop these days. Do you have any hometown spots you miss?

Yeah, we were just back in Boston and there's this great oyster house Mike and I used to go to all the time before we were in a band together. It's called B & G Oysters, and it's great because they have such a wide array of oysters and seafood. When we went back a few days ago all I could think about was getting a lobster roll from there. Also Deep Ellum was another restaurant we'd always go to in the Allston area. It was great because it was right down the street from our practice space, so every day after we got out of rehearsal we'd go. They have like 97 different kinds of beers — all kinds of Belgian ales and Chimays — so we'd go and get nice beers and gourmet burgers with truffle fries. Oh! And I almost forgot, another favorite is this vegetarian restaurant called Grasshopper. In fact, when I was a really poor college student, they had buffets there the third Sunday of every month, so I'd literally go with ziplock bags and line my pockets with vegan General Tso's tofu.

You're just finishing a stint of East Coast dates with Tokyo Police Club. On US tours, is there a particular region's food enjoy more than others?

I love, LOVE touring the South. This is actually the first tour where we spent the majority of the time in the South. We were in New Orleans, Charlotte, North Carolina, Atlanta, Georgia and up through Northern Virginia, even down in Austin. I think we ate barbecue for like eight days straight.

So I have to ask: where do you fall on the mustard-based versus sweet barbecue debate?

Well we had both, but I think the best barbecue was in Memphis. There's a really famous place there called Rendezvous, it's one of those places where you walk in and their menus are glazed into the table and they're like, 'we just have seven items on our menu, sweet tea and a bunch of beer, that's it.' All their barbecue is dry rub, which I had never had before, but I think I'm actually more of a fan of it than other kinds because you get to choose how much sauce you want.

If the South is your favorite food region, what's your least favorite?

Oh, the midwest by far. The more land-locked you get, the worse the eating gets. While we were on this barbecue tour, it got to the point where I was like, 'Okay my heart hurts, I want to try and eat something healthy.' So while we were in Dallas I thought it would be a great idea to get sushi, which was probably the worst decision I've ever made in my life. And I knew it was a bad decision too, I was like 'Wait, how far is the water from here? Aw, whatever.' So I got it any way and ordered a fatty tuna sashimi and the middle of the fish was frozen solid.

Do you guys have a particular city you love touring for the food?

Ya know, it'd be easy to say New York but I think my favorite is Chicago. I mean, I had never had deep dish pizza before I went there and I've never had a single slice of pizza make me feel that full. I'm excited because we're actually going there in two days to play the Taste of Chicago food festival. I just hope our meal buyouts are in vendor tokens.

Speaking of festivals — you've been making the rounds this year: South By Southwest, Sasquatch, Coachella, you name it. Which music festival do you think has the best food?

Well, my favorite was the Ultra Festival in Miami, it's part of the Winter Music Conference. It's my least favorite festival to play but the best festival for food. I mean, it's a fun festival, but it's all DJs and electronic music and giant tents where you walk in and there are 30-person orgies with girls in bikinis and neon fur boots all chewing on pacifiers because they're rolling on ecstacy at 3 o'clock in the afternoon. So at first I was like 'WHAT ARE WE DOING HERE!?' But the food was totally amazing there — all Cuban and Creole — such good empanadas and arepas.

So when you're not eating arepas at rave-orgies, ever gamble on street food in new cities?

It depends on how drunk I am, haha. I've had some bad experiences, I got pretty intense food poisoning from street meat I had in London recently. But I do love this one really amazing taco truck in New York called Calexico. My friend turned me onto it last summer and I was like 'Wait, 25 minutes to wait for a burrito out of a cart? That's bullshit.' But it was totally worth it! Also, there's this place called Gourdough's in Austin. Anthony Bourdain just did a show on Airstream trailer street vendors in Austin and they were featured on it. It's essentially a doughnut trailer where they make the doughnuts in front of you, things like deep-fried doughnuts stuffed with jalapenos and cheese. They're amazing and extremely unhealthy.

I noticed when you were in Detroit recently, you were taking local food recommendations via Twitter. Is that how you usually go about finding good local spots?

Finally after two years I've started to keep logs of where we've been. But a lot of tweeting and taking recommendations from friends that tour a lot. That was actually how I found probably the best sandwich I've had in my life — it was at this place in Seattle called Paseo. It was this amazing pulled pork sandwich and I found out about it just from tweeting about where I should go in Seattle. And a bunch of my friends in other touring bands all across the board were like, 'You NEED to go to Paseo!'

Do you ever splurge on fine dining while on the road?

Yeah we usually do that once every tour if we have the time. The best one we've had was at this place called Graham Elliot in Chicago. It was funny how it worked out because we were all ready to drop mad money on this dinner. And we stuck out like sore thumbs walking into this restaurant looking haggard because we'd been on tour for three weeks, despite trying to look really presentable. And the wine manager came over and said, "Hey we have a bet going. You guys are either in a band or you're in town for the hair and nail convention." So we told them we were in a band and then they recognized us and the head chef [Graham Elliot Bowles] was a big fan of our music. So they wound up comping our whole meal and it was some of the best food I've ever had.

And finally, the lightning round!

Check out the video for Passion Pit's single Little Secrets:

Passion Pit's Manners is out now on Columbia Records.