And thus concludes the series of exclusive excerpts from the just-released issue two of Swallow Magazine (available at your finer newsstand or online). Here now, a profile of Eda Magazine's editor-in-chief Alexei Zimin by James Casey. 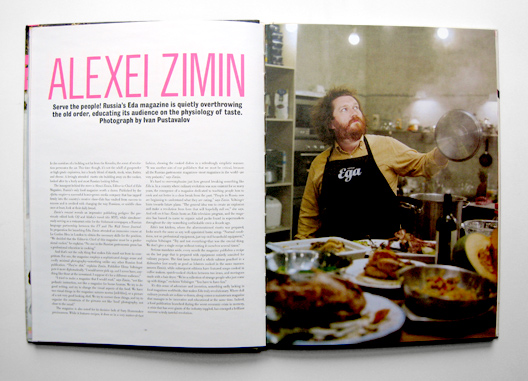 In the corridors of a building not far from the Kremlin, the scent of revolution permeates the air. This time though, it's not the whiff of gunpowder or high-grade explosives, but a heady blend of starch, stock, wine, butter, and cheese. A lovingly attended risotto sits bubbling away on the cooker, looked after by a burly and most Russian looking fellow.

The insurgent behind the stove is Alexei Zimin, Editor-in-Chief of Eda Magazine, Russia's only food magazine worth a damn. Published by the Afisha empire—a successful home-grown media company that has tapped firmly into the country's creative class—Eda has vaulted from success to success and is credited with changing the way Russians, or middle class ones at least, look at their daily bread.

Zimin's resumé reveals an impressive publishing pedigree (he previously edited both GQ and Afisha's travel title MIR), while simultaneously serving as a restaurant critic for the Vedomosti newspaper, a Russian language partnership between the FT and The Wall Street Journal. In preparation for launching Eda, Zimin attended an immersive course at Le Cordon Bleu in London to obtain the necessary skills for the position. "We decided that the Editor-in Chief of this magazine must be a professional cooker," he explains. "No one in the Russian gastronomic press has a professional education in cooking."

And that's not the only thing that makes Eda stand out from its competitors. For one, the magazine employs a sophisticated design sense and coolly minimal photography—something unlike any other Russian food publication. "They're shit," explains Zimin. Publisher Elena Voltsinger puts it more diplomatically. "I would never pick up, and I never have, anything like those at the newsstand. I suppose it's for a different audience."

"I tried to make a magazine that I would read," says Zimin, "not like pedantic instruction, not like a magazine for house heaters. We try to do good writing, and try to change the visual aspects of the food. We have two visual things in the magazine: natures mortes [still-lifes], or a picture of a not very good looking chef. We try to correct these things, and try to organize the constructs of the pictures not like 'food' photography, not close to the usual."

The magazine is also noted for its decisive lack of Suzy Homemaker preciousness. While it features recipes, it does so in a very matter-of–fact fashion, showing the cooked dishes in a refreshingly simplistic manner. "It was another aim of our publishers that we must be critical, because all the Russian gastronomic magazines—most magazines in the world—are very pedantic," says Zimin.

It's hard to over-emphasize just how ground breaking something like Eda is. In a country where culinary evolution was non-existent for so many years, the emergence of a magazine dedicated to teaching people how to cook and eat better is a clear break from the past. "People in Russia now are beginning to understand what they are eating," says Zimin. Voltsinger hints towards future plans. "The general idea was to create an explosion and make a revolution from here that will hopefully roll on," she says. And roll on it has: Zimin hosts an Eda television program, and the magazine has loaned its name to organic salad packs found in supermarkets throughout the city—something unthinkable even a decade ago.

Eda's test kitchen, where the aforementioned risotto was prepared, looks much the same as any well-appointed home setup. "Normal conditions, not on professional equipment, just top end household equipment," explains Voltsinger. "Try and test everything—that was the crucial thing. We don't give a single recipe without testing it ourselves several times."

Serious mandates aside, every month the magazine publishes a recipe on the last page that is prepared with equipment entirely unsuited for culinary purpose. The first issue featured a whole salmon poached in a dishwasher (not nearly as good as lobsters cooked in the same manner, assures Zimin), while subsequent editions have featured soups cooked in coffee makers, spatch-cocked chicken between two irons, and meringues made with a hair dryer. "We're a collection of strange people who just come up with things," exclaims Voltsinger. "You have to have fun."

It's this sense of adventure and invention, something sadly lacking in food magazines worldwide, that makes Eda truly revolutionary. Where dull culinary journals are a dime-a-dozen, along comes a mainstream magazine that manages to be innovative and educational at the same time. Indeed, a food publication launched during the worst economic crisis in memory, a crisis that has seen giants of the industry toppled, has emerged a brilliant success—a truly tasteful revolution.