Share All sharing options for: Top Chef D.C. Episode 7: He Who Peas Wins 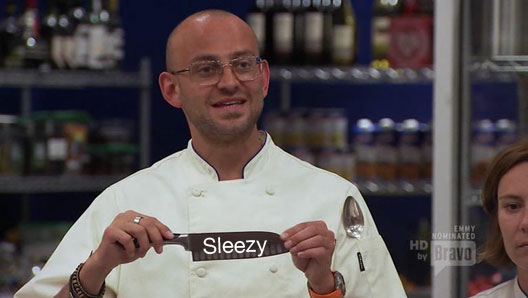 This week's episode is entitled "Power Lunch" because it's still the 1980's up in here. I thought no one had expense accounts anymore? Hopefully certainly not anyone in Washington. Remember when Gordon Gecko said, "lunch is for wimps"? No one told all the wimps in this episode. When I hear "power lunch" I think it means we can expect lots of very expensive, mediocre food served to garbage people wearing suits. And I am mostly right about that! (And when I say "garbage people," I am not saying the politically correct version of "garbage men." I mean people who happen to be human garbage, but honestly who are probably also men.)

Also, as promised by the teaser for this episode last week, there is going to be lots of drama involving a pea puree. I can't wait for a showdown between Ed and Alex over who stole the peas! It is going to be like a Harrison Ford thriller up in here I imagine. Gimme back my peas! Get off my peaplane! There is a clear and present danger of me not being able to serve my peas. I am pea-sumed innocent. (Sorry about that last one. I mean, sorry about all of them.)

Our chefs prepare for the Quickfire. Kevin has a newfound and probably undeserved confidence after his win last week. Kenny, despite getting shutdown by guest judge Michelle last week, still believes his place on the bottom was only due to strategy. He says he's "too much of a beast in the kitchen to go home." Is that an asset? If I was in charge of a restaurant and I saw an animal in my kitchen, I would pay somebody to shoot it in the head so everybody else could keep working. 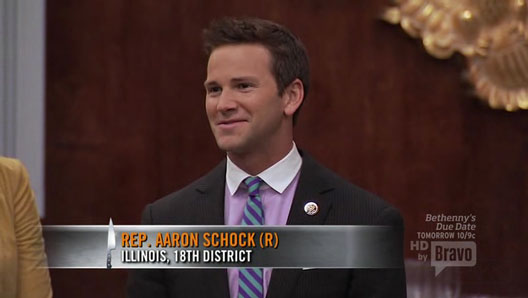 The Quickfire judge this week is Representative Aaron Schock, a Republican from Illinois 18th District. (The Fightin' 18th!) Rep. Schock is the youngest Congressman in the House, which is probably why they make him wear that color shirt and tie. And, completely startlingly, as Padma begins her speech connecting the judge to this week's Quickfire to D.C. and politics and everything else, we actually learn something interesting that might make for a relevant and appropriate challenge. My oh my! Ethics rules state that in order to curb the influence of lobbyists on Congressman via free meals, any food served to Congressmen must come on a toothpick. That is neat! Also, that is ridiculous, and it only indicates how much a joke ethics reform is in Washington, as you can fit a lot of freaking food on toothpicks. I bet I could walk into a restaurant right now, order a 200 dollar dinner, cut it up into pieces, and stick toothpicks through every piece. Ta-da. I BET that. The whole premise is just, "Look, Congressman HAVE to be served free meals by rich people who want to influence them. There's no way around that, right? What are they going to do? Say NO to these meals and buy their own food? Of course not. How are you supposed to afford steak dinners every day on only six figures a year?"

The chefs must prepare an hors d'ouevre that fits on a toothpick. Not only does the winner of this Quickfire get immunity, he or she also gets $20,000. Woah! Andrea explains to the camera that she and her husband have debts and live in a world where legal tender can be exchanged for goods and or services, so SHE really needs the money. Wow. What a compelling case. All the other chefs must be like, "Oh, you should just take it. I can't even IMAGINE what I'd spend that money on. If anything I have TOO much money already."

Amanda scrambles around the kitchen like an idiot. A lot like an idiot. She explains that when presented with a challenge, or a question, or ANYTHING in life, "I don't automatically have an idea." Of course not! Why would you? Only normal functioning brains have things like "ideas", connections between thoughts and memories created instantaneously by the mind. That's just not what you do.

Kelly is combining watermelon and scallop. That does not sound good! The one food my girlfriend dislikes is scallops, and the one food I dislike is watermelon, so we were SUPER excited about this dish. "I wish we could crawl inside the TV and throw up on Kelly's plate." That's what we said, at the exact same time. It was spooky.

Stephen continues to be extremely confident. That guy, always so sure of himself. He says, "Oh my god!" a number of times in a row.

The least successful for Schock are Alex, Ed, and Kelly. I am glad Kelly was punished for making a combination of food my girlfriend and I hate. That's what this show is all about: pleasing two arbitrary persons. Schock then lists his favorites using EXTREMELY flamboyant phrasing. Kevin: "I COULDN'T stop thinking about your dish." Angelo: "It was like fireworks in my mouth." Stephen: "Wow, there's a lot on that stick. I was like, what a huge stick that I love in my mouth! Big sticks!" (Some of that is a lie.) Angelo wins with his cucumber thingy. 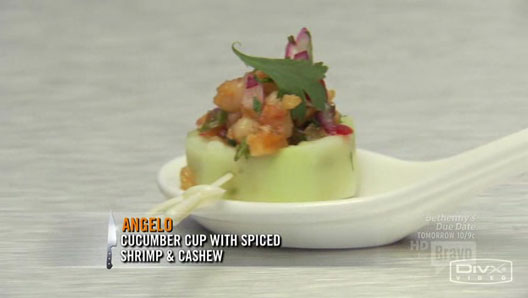 Angelo says that he can't let the win go to his head and he vows to just move past it. He does not seem that excited. 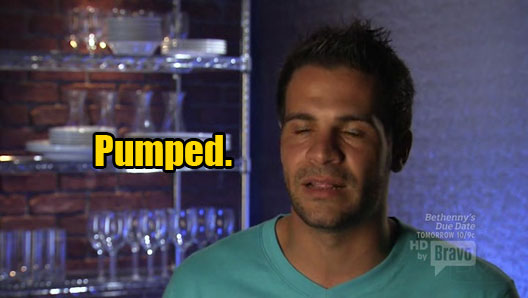 For this week's Elimination Challenge, the cheftestants are handling an old school political tradition: the Power Lunch. "A good meal can make negotiations move very smoothly." Sure. The chefs will be taking over a lunch shift at the famous Palm Restaurant in Washington D.C. They will each be serving 24 diners, using the five main proteins on the Palm's menu: porterhouse, salmon, lamb, swordfish, and lobster. They draw knives, but not to team up.

The chefs shop for thirty minutes at Whole Foods. They have 300 dollars to spend. Isn't it WEIRD I don't spend more time recapping the shopping part of the show? What a fun part of every episode. It's very normal and very correct that we spend 5 minutes of each episode at Whole Foods watching the chefs walk through aisles and checkout groceries. Because television is an escape and who ever gets to go shopping? So fun!

The chefs return to the kitchen to start prepping their meals and are a bit overwhelmed by the proteins the Palm has supplied. The lobsters are four pounds, the porterhouse is fit for a caveman, and according to Alex, the salmon is a "dinosaur portions." Dinosaurs love salmon! (Bears are the same as dinosaurs, right?) Andrea burns her bacon which is ironic considering her t-shirt. 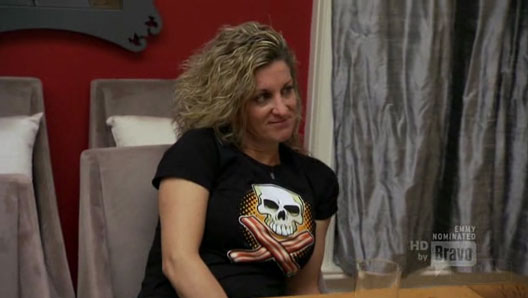 Back at the house, Kenny talks to Alex about Ed's pea puree. Alex is intrigued. The tension builds! (The tension doesn't build.) Ed and Tiffany "flirt" in a completely unadorned bedroom that looks like the first night in a college dorm. ("I can't wait to hang up my Weezer posters.") Tiffany insists there is no flirting going on. I am inclined to agree with her, because when I flirt with someone, I usually don't clip my fingernails onto an envelope and then slide them onto a table.

The next day in the Palm kitchen, the chefs meet the grandson of the founder of the Palm. He tells them that this is the first time the restaurant's kitchen has ever been handed over to a reality show in its entire history. What an honor. Bruce Bozzi Jr. (I think?) says that in addition to getting his or her dish on the Palm menu, the winner also gets his or her caricature on the wall alongside many other famous faces.

Stephen is especially excited about the possibility of getting his face on the Palm wall, which makes sense, because of his cool face. 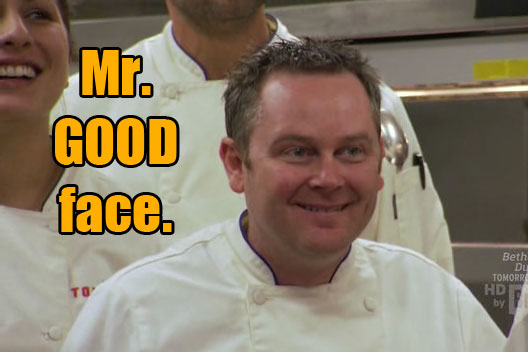 The chefs get cooking. It is stressful in there! Tom is hanging out and making everybody nervous. Tiffany's off in a corner, though, and handling it. But suddenly, Ed can't find his pea puree. It was in the cooler, but now it is not. Alex says he did not see any peas. Yeah, RIGHT. They better all get it together because there are lots of "famous" DC people there. Joe Scarborough, Luke Russert, John Podesta, and this guy, Senator Mark Warner. Yum! 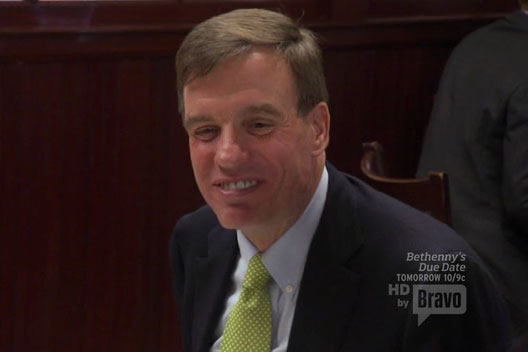 They serve their dishes. Kelly didn't slice her prime rib while Amanda did. Kelly thought the protein should be "respected" but it backfires when the huge steak overwhelms the stupid, picky diners. Also, in what seemed like a bit to spite Amanda and keep the salt away from her, Kelly has oversalted her steak. Whoops!

Everybody loves Alex's puree. Eek. Ed's gonna be so mad. Angelo's lobster is chewy and covered in foam. Joe says, "I'm not a foam man. Maybe in kitchens in France or Spain." Ugh, shut up, Scarborough. You aren't running for Congress, here.

After the meal, the chefs hang out in the Gladware closet and drink wine. Stephen does a funny "bit" where he gives a lecture on how to be on the bottom. (Eyebrow raise.) It is funny because he's bad. 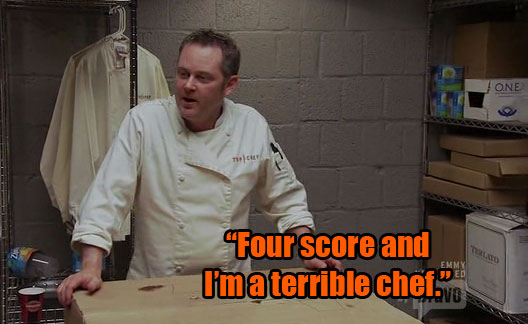 Padma calls in Alex, Tiffany and Ed. They are worried, but for no reason. They are the winners. Alex versus Ed. Epic. Tiffany cries because she was so worried. Alex wins because of his amazing puree and has the gall to say, "Gotta be your own food on the plate." Alright now. 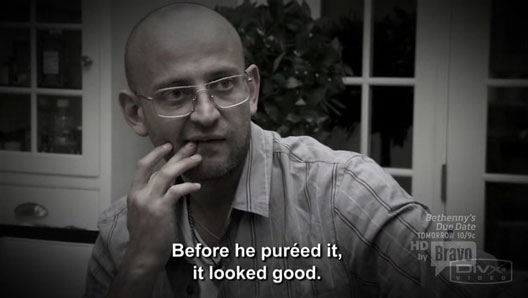 The bottom is Kelly, Andrea and Kevin. Kelly is a wreck. She feels she tried to change her cooking to satisfy the judges by overseasoning. She betrayed herself! Someone pours her some red wine. Smart. But she is safe this week. Andrea's going home for her swordfish. Kelly seems more upset than Andrea about the whole thing. 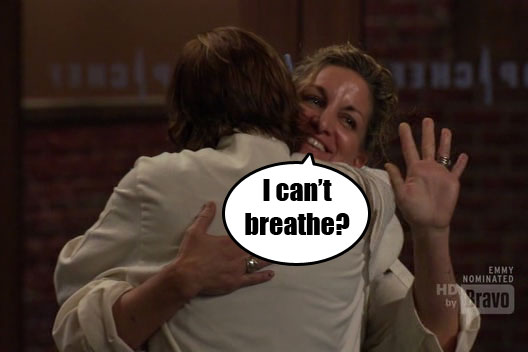 Bye Andrea! I only really knew who you were last week, but you seem great. I am sorry you didn't win 20k because you and you alone needed that money. On next week's episode, Alex trips.