Share All sharing options for: Fake Exit Interview: Andrea Curto-Randazzo on Humiliation and the Obvious Spoiler 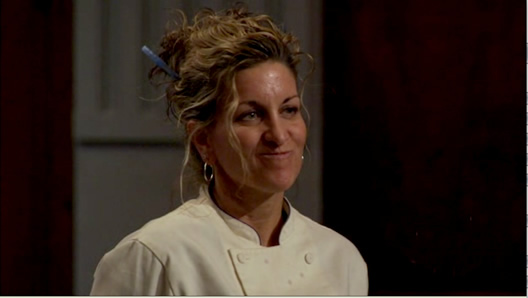 Andrea, your time on Top Chef seemed to consist of one small humiliation after another.
Yeah, I'm kind of relieved to have packed by knives and gone. I look forward to being humiliated only in front of loved ones.

How was it standing in judgment in front of Michelle Bernstein?
As I said during that episode, Michy and I started around the same time. But she relentlessly focused on her career whereas my husband drugged me and forced me to have three children whose very existence seems designed to thwart my professional opinion. I will say this though: When Michelle is old and incontinent, she won't have anybody to roll her over and clean her bedsores. I, on the other hand, will have three somewhat resentful grown children and a fistful of grandchildren who think I look like an old dinosaur.

But she will be peeing atop a mattress full of positive reviews and cash.
Yeah, but she's still peeing on it.

Yeah but it's money that she's peeing on.
Money and herself.

Whereas you'll be peeing on...
Myself and my children.

Oh, that does sound better actually. No one accepts pee'd on money anyway.
Unless it's pee puree.

Yeah. Then they steal it.
Totes. Alex is a shifty eyed creepy motherfucker. One night I woke up and he was standing over me, wearing those shoes with individual toes, his chef's toque and no pants. Kenny came in and said, really authoritatively, "Alex!" Later it turned out Alex was a sexsomniac. And, even later, it turned out he was a kleptomaniac.

So you're convinced he stole Eddie's pea puree?
Sure. Bravo has the footage but they had to burn it in during Spygate under pressure from Obama. How do you think they got John Podesta to appear?

True. In general, and judging from that hilarious video you made, you don't have a lot of respect for Padma's palette.
No. I am a chef. Padma is a model and jewelry designer. It's not like I look at her face and then say, "Eh, your eyes are nice but your lips are a little coarse." No, beauty is her thing. Food is mine.

Well, her lips are like delicate angel kisses.
I know. She's pretty good looking. But so is Tom. As I mentioned, I have a husband, but Tom Colicchio is a stone-cold fox. I always thought that if we got together I could just count on him to be very straight forward with me and then take me in his big muscular arms and make sensual love to my body area.

What do you make of the other contestants?
Honestly, I can not believe Amanda is still on the show. She's horrible. I mean, she's not nice and she's not smart so I don't know what she's got going for her.

And the blossoming Ed and Tiffany romance?
I guess, get it while you can young lovers because soon you'll have kids and that greatness, that once seemed inevitable, will retreat faster and faster until one day you look up from changing a diaper and applying LA Looks strong hold gel to your hair and see it disappear on the horizon.

Who is going to win, Andrea?
If I am honest with you, no one wins this season. Not me. Not you. Nobody.