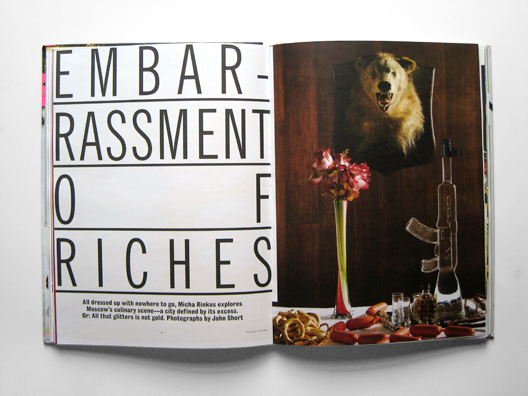 Moscow is one of the worst places in the world to put things in your mouth—a city where foodies go to die, or at least complain a lot. Actually, effete foreigners can find plenty of things to grumble about in Moscow, not limited to its weather (cold), its government (absurdist, petro-authoritarian), and its people (xenophobic, linecutters). Nonetheless, among these very salient bitching points, dining out floats to the top.

That's not to say home-cooked Russian grub isn't tasty. Like hell it is. Carbohydrate-heavy comfort food—beet soup, meat dumplings, fried potatoes, fried cheese, fried lard—is the time-tested method to insulate your body against a long hard winter, and have fun doing it. The only condiments in action are salt and sour cream. Occasionally ketchup if it's for something exotic, like macaroni. You can eat like a tsar for only 50 rubles a day. Until your heart explodes. The Russian diet, along with cigarettes, unprotected sex, and bathtub vodka, has driven the national male life expectancy down to 59 years, right above Ghana. 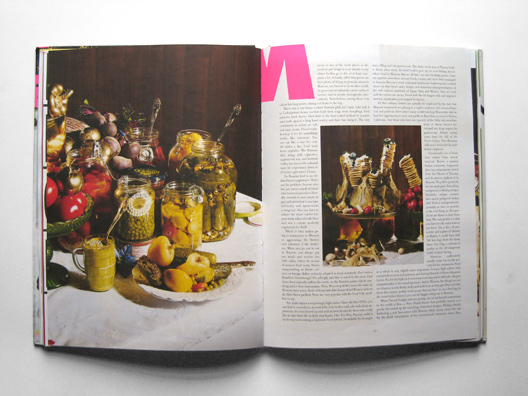 So Russian food is an Atkins Dieter's nightmare. That's not the problem. Anyone who has just eaten a stack of blinis (thin buttered pancakes, liberally covered in sour cream or jam) will attest that it was time deliciously well spent—sucks to longevity. Also you have to admire the sheer calorie-for-your-ruble value of it all. Russia's was a cuisine modestly engineered for thrift.

Which is what makes going to restaurants in Moscow so aggravating: the brazen over valuation of the mediocre. When you go out to eat in Moscow, you always pay too much and receive too little value, either by means of peasant food (sorry blinis) masquerading as haute cuisine, or foreign dishes violently adapted to local standards. Ever seen a Russified chimichanga? It's achingly sad, like a camel in the snow. East Asian food typically suffers the worst, as the Russian palate rejects anything spicier than mayonnaise. Thus, Moscow pad thai tastes the same as Moscow chow mien. Both of them taste like freeze-dried Ramen without the little flavor packets. None are very popular with the local folk, needless to say.

Yet, sushi enjoys a surprisingly high status. Since the late 1990s, you can find it everywhere, at every little hole-in-the-wall cafe with elitny aspirations. It's even boxed up and sold at street kiosks for those who really like to take their life in their own hands. Like Tex-Mex, Russian sushi is on its way to becoming a legitimate food hybrid, identifiable by its ample mayo filling and tiny portion size. The dinky bento box at Planeta Sushi is about when many die-hard foodies give up on ever finding decent ethnic food in Moscow. But we all have our own breaking points. I lost my appetite somewhere around Etazh, a nasty cafe chain that's managed to harness Moscow's worst restaurant tendencies: ludicrous face control (more on that later), tacky design, and shameless misrepresentation of the rich culinary traditions of Japan, Italy, and Mexico. Also, it's loud and the waiters are mean. Faced with flaccid dragon rolls and impostor burritos, mastication just stopped being fun.

All this culinary horror can partially be explained by the fact that Moscow restaurants are playing to a captive audience. For reasons financial and political, there aren't many world-traveling Muscovites who've had the opportunity to taste real paella in Barcelona or even in Fresno, California. And those who have are typically of the filthy rich overclass, most of whom haven't developed any deep respect for gastronomy. Almost twenty years since the fall of the Soviet Union, New Russians still aren't bothered by halffrozen carpaccio.

Occasionally one of them does return from abroad inspired. Bistrot, a palatial Italian restaurant, happened after two restaurateurs visited Forte Der Marmi in Tuscany, and decided to replicate it in Moscow. They did a good job, for the most part. Everything is imported, including antique furniture, artisan ceramic tiles, and a pedigreed Italian chef. Food is unimpeachable, probably as close as possible to the real thing, as all ingredients are flown in daily from Italy. The only problem is that you have to take out a loan to eat there. For a slice of prosciutto and a glass of Chianti at Bistrot, I could have had 100 hot dogs from the kiosk chain Star Dog, a stalwart of quality in the oft dangerous world of street dining. 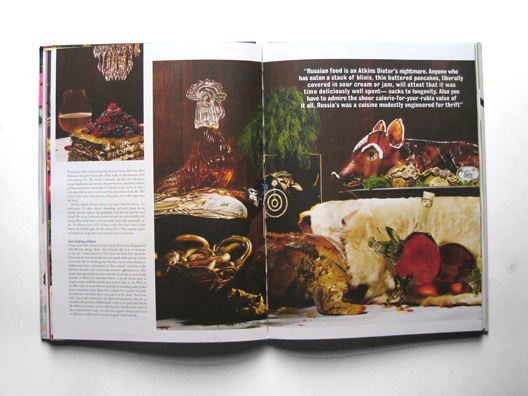 However, authenticity usually ranks low on the priority list for restaurants. Food as a whole is only slightly more important, because high rollers stick exclusively to meat and potatoes, and their girlfriends to Russo-Japanese fusion. No, for the high-end restaurant, towering above all (to the chagrin of gourmands), is the visual spectacle. And in Moscow, the things you see are about as weird, flashy, tacky and ambitious as they get. Once you embrace this unique quality (and accept that you have to eat a hot dog on the street before dinner), you can be happy eating out in Moscow.

When I'm not hungry and not paying, one of my favorite restaurants in the world is Bon, a Novy Russki haunt that probably started as a prank, but ended up the real thing. Industrial designer Phillipe Starck, harboring a sick fascination with Moscow elitny excess, chose the city for the third instantiation of his international restaurant chain Bon. Teaming up with a restaurant group whose previous effort was called Billionaire (to give you an idea of the scale of ridiculousness they were aiming for). The result is fantastic, gleeful, over-the-moon camp: Kalashnikov gun stands, obscene frescoes, taxidermy iced out in Swarovski jewels—essentially, it's Starck's ironic vision of what a rich man with no taste would want his restaurant to look like. The irony is that none of its patrons, minigarchs and molls, appreciate the irony.

For the visuals, I'd eat at Bon every time I had the chance. For sustenance, I'd rather shovel dumplings and sour cream in my mouth over the sink in my apartment. And it's not that the food is bad. The menu is decent, if scattered and over-priced, full of the boring Moscow favorites: sea bass, steak, salad, and, immutably, sushi. No different from T.G.I. Fridays, really. But what's clear is that food is the afterthought, not the raison d'être. They created a glorious temple to camp, then remembered it was a restaurant.

Going out to look, not taste, is one way you'll never be disappointed with Moscow dining. That's why everyone else is at a restaurant, at any rate. A fancy dinner is 10% about the food, 25% about the booze and the rest about who you can watch while you eat it (and, conversely, who is watching you). For this reason, many dining establishments have a strict policy of "face control," which has trickled down from the city's notoriously exclusive nightclub scene. This means that ugly people (or, more correctly, those that are poor, badly dressed, or ethnic) are told that's there's a private dinner party in progress and would they kindly find another place to eat. While in the West they use more discreet methods of excluding undesirables from restaurants, many Muscovites endorse the practice of public humiliation. Sometimes they even post it on the door: "Face Control," plus a little smiley face. In high-end restaurants, they do an exceptionally good job of filtering the crowd to the point that it looks like Hitler's Germany crossed with Dynasty. Finally, if the terror of face control doesn't make you lose your appetite, being seated next to a Russian model and her metals magnate boyfriend will.