Swallow Magazine is a bold, innovative food and travel magazine brought to you by editor James Casey. Published in a handsome, hardbound book format, each issue focuses on a different region of the world, bringing much-needed intelligence from the corners of the globe, profiling chefs and exploring art, culture, and fashion. Issue two, centered around the Trans Siberian Express, hit the newsstands this week (you can also buy it online). Print's not dead yet, especially not if Casey has anything to say about it.

In the premiere issue, you wrote that Swallow Magazine is "a step away from the hubbub of 'foodie' faddism." Is it just a matter of eschewing pop culture and celebrity? Just heading off the beaten path?

We don't avoid pop culture at all, quite the contrary—we're all about it. The magazine is sort of a pop sociological way of looking at food and showing how food and culture are entirely entwined. That said, we're certainly not sniffing around the celebrity chef beat. It's funny, because we tell ourselves at how enlightened we've become in relation to what we eat, but I sense that all this celebrity chef/food fad business is a diversion from really enjoying good food.

Just look at some of the people showing us how to eat on the TV—it's a grotesque circus! That Paula Deen woman appears to be missing her meds, Guy Fieri is the spitting image of Bingo from the Banana Splits, and the less said about what that Bizarre Foods fellow [Andrew Zimmern] puts in his mouth the better.

We have certainly headed off the beaten path a bit, but only to try and show that there is a whole lot more out there worth exploring. Ideally, each issue should serve to inspire the reader to go out there and try something different. 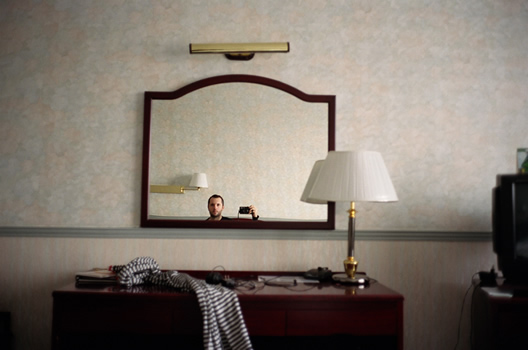 Who the hell are you? Why are you qualified to do this?
My background is in magazines—I had been working for fashion and lifestyle titles for much of '00s. Anyhow, at some point, I realized that there wasn't really a food magazine that was doing something super-creative and abstract out there (like NEST was for interiors, or certain fashion magazines for clothing). I wanted a venue where creative photography could coincide with a food writing that had a sense of humor, and the only thing to do was to create it. Also, growing up, my father was the publisher of a food magazine in the late '80s and early '90s and as a result, I was exposed to a lot of interesting things.

Who's your intended audience here? Is this for the Gourmet readers who "seem to have largely vanished"? Or do you have a whole other group in mind?
Our audience is smart and adventurous, and likse to make their own mind up about what is presented to them. They are often avid travelers, and equally at home in both high-end and down-low situations. For example, we'll feature profiles with adventurous chefs, alongside artists and figures who might not, at first glance, seem associated with food. But the reality is that everyone has a relationship with food, for better or for worse. When we travel to different countries, we're not afraid of showing the bad alongside the good, as both are equally important in trying to understand and enjoy another culture. In the new issue, Micha Rinkus wrote a great story about dining out in Moscow and how it is more often than not, spectacle over substance.

I would love to think that we could attract the missing Gourmet readers, but we're always going to be a far more of a niche publication. Firstly, we're called Swallow, and we also come out twice a year and in a hardbound book format which is certainly not going to be any sort of replacement. I loved Gourmet—they had the ability to fly around the world and bring all this amazing information into your home every month. Ultimately, we will never run with similar budgets, but we hope that perhaps we can at least offer a similar sense of wonder through travel like they did.

After Gourmet was killed off back in October 2009, editor Ruth Reichl pronounced that "print magazines as we know them will cease to exist." Print, clearly, in your mind, is not dead. But why not just do this all online?
I definitely don't think print is dead—there are things that print can do far better than digital, and likewise things that digital can do far better than print. I think the solution is integrating both aspects of two together in interesting and rewarding ways. That said, I agree in part with Ms Reichl—I see the printed magazine's evolution coming through re-approaching how we produce magazines and what they are used for. Swallow is deliberately a hardbound book and a premium product—something that someone would pay $30 for and want to hold on to. This I think is one way for print to flourish—by becoming tactile, using beautiful photography and illustration, and using different inks and paper stocks. Digital is great for information, but print is better served as an object of beauty. We are currently working with a big digital agency to develop a digital direction for Swallow. As it is early, I don't want to say too much, but I am fairly convinced that our solution is going to be a really interesting approach to telling stories online and through mobile technology. It will support the printed content, but will also serve an entirely different function and hopefully will answer a lot of these sort of questions in the future.

There's this recent wave of a return to print: boutique magazines serving particular niches. Things like Fire & Knives, Meatpaper, all the localized Edibles. Sort of like how vinyl is making a comeback, a return to analog!
I guess in some ways you could see it as vinyl, but the thing is, the print medium never went away. Print is, as I said before, a totally viable medium that does certain things far better than digital could ever do them. Note that all the publications you mentioned are not at all news-based. They all have articles and features that wouldn't be out of date a year from now. If I can speak for the other publishers, I think that they (like us) have realized that different information is suited to different formats. If you're going to run a 16-page photo essay by Takashi Homma on Khabarovsk and Vladivostok (as we did), it won't look as nice on a computer screen as it would on great paper, laid out with some real attention to detail. That said, if you were writing an article on kitchen techniques, a digital piece with video would probably be the better choice. I think that the future is integrating the two in a rather seamless way—I did buy vinyl recently with a keycode to download the mp3s as well, which I thought was a great idea and something to think about.

Issue one (released November 2008) anticipated the now-current enthusiasm for Scandinavian cuisine, in particular Rene Redzepi's global recognition (earlier this year his restaurant Noma was recognized as #1 in the world by S. Pelegrino). Issue two is about the food experiences along the Trans Siberian Express, focusing heavily on Russian chefs. Why? What's going on there?
The Trans Siberian issue is a bit of a canard as the issue should actually be the "Trans Siberian/Trans Mongolian to Beijing." We're using the train as a device in connecting Moscow, Irkutsk in eastern Siberian, Ulaanbaatar, and Beijing—four otherwise scantly connected destinations. But yes, the majority of the magazine is of a Russian nature. I think that while Russia is not going to supplant Scandinavia anytime soon, the scene in Moscow is interesting. It seems that people are starting to discover good food and that there are certainly more than a few interesting characters out there. For example, Anatoly Komm is Moscow's only molecular chef of note. He is avidly dedicated to his craft, and serves extremely expensive tasting menus devoted to the flavors and character of Russian food. While one might dismiss this at first glance, my two visits to the restaurants were total revelations. In fact, Ferrán Adriá, the master of all things molecular chose Komm as one of his chefs in Phaidon's COCO book. His quote was, "I have chosen Anatoly because I think we should look to Russia for the future of gastronomy." Adriá also said something similar about five years ago, about how the Nordic countries, gastronomically, are the new Spain.

Based on your experiences in Russia, do you agree with Adriá?
Well, he's sort of like the oracle—we wont know if he's right until it does or doesn't happen. But no, I don't think there will be an scene like that in San Sebastian (or Stockholm) anytime soon. That said, there will certainly be some interesting things springing up. In fact, I heard that a new restaurant opened in Moscow that is starting to work with local food—something inconceivable a few years ago. Considering how far it has come in such a short amount of time, and also in light of what is an amazing history of food, I would say underestimate the Russians at your peril.