All week long, Eater National will be running exclusive excerpts from the just-released issue two of Swallow Magazine (available at your finer newsstand or online). Here now, a profile of Russian chef Anatoly Komm of the Moscow restaurant Varvary. 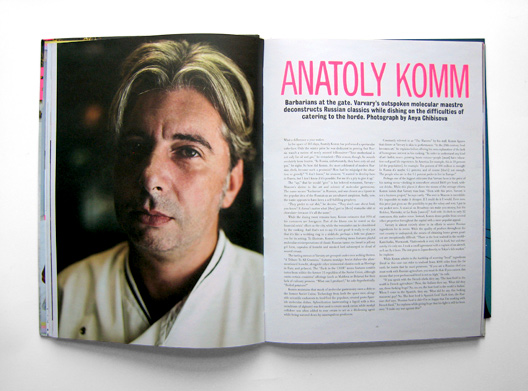 What a difference a year makes.

In the space of 365 days, Anatoly Komm has performed a spectacular volte-face. Where only the winter prior he was dedicated to proving that Russia wasn't a nation of tasteless billionaires—"your motherland is not only for oil and gas," he remarked—this season he sounds resolutely brow beaten. "In Russia, unfortunately, they have only oil and gas," he sighs. So how did Komm, the most celebrated of modern Russian chefs, become such a pessimist? How had he misjudged the situation so gravely? "I don't know," he answers. "I wanted to develop here in Russia, but I don't know if it's possible. For me it's a pity to give it up."

The "up," that he would "give" is his beloved restaurant, Varvary—Moscow's shrine to the art and science of molecular gastronomy. The name means "barbarian" in Russian, and was chosen as a riposte to the popular idea of the Russian as an uncultured simpleton. Sadly, now, the name appears to have been a self-fulfilling prophecy.

"They prefer to eat shit," he decries. "They don't care about food, you know? It doesn't matter what [they] put in [their] stomachs—shit or chocolate—because it's all the same."

While the dining room remains busy, Komm estimates that 90% of his customers are foreigners. Part of the blame can be rested on the financial crisis' effect on the city, while the remainder can be shouldered by the cooking. And that's not to say it's not good—it really is—it's just that it's like a wedding ring in a sinkhole, perhaps a little too glamorous for its setting. To illustrate, Komm's evolving menu features playful molecular reinterpretations of classic Russian tastes: rye bread in pillowy gel form, capsules of borscht and smoked lard submerged in cloud of soured cream.

The tasting menus at Varvary are grouped under overarching themes. "A Tribute To All Grannies," features nostalgic Soviet dishes—the aforementioned borscht, alongside other reinvented classics such as Herrings in Furs, and pelmeni. The "Back in the USSR" menu features notable tastes from within the former 15 republics of the Soviet Union, although omits certain countries' offerings (such as Moldova or Belarus) for their lack of culinary prowess. "What can I produce?," he asks hypothetically. "Boiled potatoes?"

Komm maintains that much of molecular gastronomy owes a debt to the former Soviet Union. Technology from both the space race, alongside scientific endeavors to feed/fool the populace, created proto-Spanish molecular dishes. Spherification (surrounding a liquid with a thin membrane of alginate) was first used to create mock caviar, while methyl cellulose was often added to sour cream to act as a thickening agent while being watered down by unscrupulous producers.

Constantly referred to as "The Maestro" by his staff, Komm figures that dinner at Varvary is akin to performance. "In the 20th century, food becomes art," he explains before offering his own explanation of the lack of homegrown interest in his cooking. "In order to understand any kind of art—ballet, music, painting, haute cuisine—people [must] have education and good life experience. In America, for example, this is 10 percent [of the population], for example. Ten percent of 300 million is enough! In Russia it's maybe 0.1 percent, and of course [that's] not enough. The people who are in this 0.1 percent prefer to live in Europe."

Perhaps one of the biggest criticisms that Varvary faces is the price of his tasting menu—clocking in somewhere around $400 per head, without drinks. While this places it above the means of the average citizen, Komm insists that Varvary runs lean. "Even with this price, Varvary is not a business project," he says curtly. "The rent in Moscow is incredible. It's impossible to make it cheaper. If I could do it I would. Even now, this price just gives me the possibility to pay the salary and rent. I put in my pocket zero. A musical on Broadway can make you money, but the Bolshoi, Marinsky, or La Scala [cannot]." And with 16 chefs to only 32 customers, this makes sense. Instead, Komm draws profits from several other properties throughout the capital with a more populist appeal.

Varvary is almost entirely alone in its efforts to source Russian ingredients for its menu. While the quality of produce throughout the vast country is undisputed, the means of obtaining home grown product are exceptionally difficult. "There is the best seafood in the world—Kamchatka, Murmansk. Vladivostock is very rich in food, but unfortunately, it's only me. I took a small agreement with a captain of an aircraft, so I can fly it here. The rest goes to Japan directly, to Tokyo's fish market," ?he explains.

While Komm admits to the hardship of sourcing "local" ingredients (local in this case can refer to seafood flown 4000 miles from the far east), he insists that he must persevere. "If you are a Russian chef you must work with Russian agriculture, you must do that. If you cannot, this means that your professional level is not so high," he rails.

"If you speak with the French chefs, they say, 'The best food in the world is French agriculture.' Then, the Italians then say, 'What did they say, these fucking frogs? No, no, no, the best food in the world is Italian.' When I come to the Spanish, they say, 'What did he say, this fucking macaroni guy? No. The best food is Spanish food.' Each time, the Russian chef says, 'Russian food is shit—I'm so happy that I'm working with French food,'" he explains while giving hope that his fight is still far from over. "I make my war against this!"