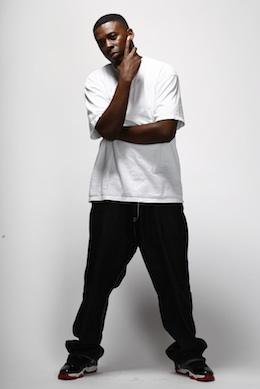 Often called one of rap's best lyricists, GZA aka "The Genius," is one of the founding members of the Wu-Tang Clan and has toured the world for the last decade collaborating with artists as diverse as Cypress Hill to Devendra Banhart. He's gone on to become a double-platinum solo artist and, in his free time, a major advocate of the raw food movement (seriously, he's persuaded the entire Clan to cut out meat!). I caught up with The Genius himself to talk weed, veggies, and the perils of pork.

How long have you been vegetarian?

For a long time, since about 1996-97 and I still ate a little bit of dairy. Throughout the years I've cut out dairy, chicken, fish, and turkey. But I haven't eaten pork since I was about 11.

Were you raised a vegetarian?

Well, I wasn't raised a vegetarian, I wish I was, though. I mean, that's really the best way to go. I just learned at a young age and stopped eating some things. As far as being a vegetarian it's a moral thing, a health thing, a conscious thing — a combination of all. I think it's better to be that way. When I was growing up I never really ate vegetables, I was just a hot dog, hamburger, french fry person like most kids.

Do you think being vegetarian makes it tough to eat on tour or do you think it just makes you more resourceful in finding good vegetarian spots?

It does make it tougher but it all depends on your diet. Like right now I'm striving to do strictly vegetables and fruit raw, so it's not too much of a problem finding produce out on the road. But I mean I dig my pasta, I love bread, and sometimes it's hard to find what you need overseas.

You were born in Brooklyn and have lived in every borough in New York, do you have any favorite local spots?

There a few spots definitely — they have this place in the city called GoBo on 6th Avenue, it's a vegetarian spot, really great meals and some of it is wheat and gluten-free. It's a little twisted though, I mean, I was a french fry dude for a long time but I try not to do that now. In the last few years I really loved spots in the city like Vegetarian Paradise and Zen Palate. I used to do the Benihana's thing, but you know how Benihana's is: you have to sit at a table with other people and most places will do the vegetarian dishes first, but if they do beef first I'm not really feelin' that.

Outside of NYC, are there any cities in the US you love to hit on tour for the food?

Yeah there's this spot in Chicago called House Of India that is great. I love Indian food and Thai food, those are like my favorites. I also like Japanese and some Italian. Tamarind on 22nd Street and Park in New York City is probably my favorite Thai place. I'm trying to be better about finding raw food spots though. I heard of one that sells "raw pizza." But when you first hear that is sounds awful. I'm like, "Man, how ya get raw pizza? Has no cheese, no mozzarella!?"

I did an interview recently with a band that suggested this macrobiotic place in LA called M Cafe...

Yo dat's wassup!! You know, LA is filled with those types of spots. LA is one of those places where you just be ridin' down Sunset and you pass like four or five raw food or vegan spots. Lotta people in Cali on it.

I read an interview recently where you said you were "a late night person who liked to eat breakfast food." Do you have a favorite 24-hour or breakfast spot?

Yeah I used to LOVE breakfast! I cut a lot of it out, but I grew up as a breakfast person: eggs, grits, cheese. But cheese is so addictive, it's hard! If I do eat cheese I try to keep it organic or locally grown so that it doesn't have to travel as far. I don't have one place in mind but yeah I used to eat it all the time — I'd be like having eggs, grits and veggie bacon at 3 in the morning every night.

Wu-Tang has never been shy about that fact that you smoke weed — do you ever indulge in any edibles or weed food?

Of course! I just stopped smoking again, I mean I stopped in 2003 for two and a half years and I gained like 25 pounds. Then I started smoking again and I lost those 25 pounds. I've always been slim but when I stopped smoking I put on that weight because I was doing the edibles. But man, that's a different high! Smoking you feel it in about ten minutes, but the edibles sneak up on you and it's a whole different body experience. You don't even know you're high until you do something stupid. Like, "damn I left the water running!" or you dumb out and start laughing ridiculously and you're like "I must be high!"

Edibles have really changed the last few years since I started eating them. It used to be you could almost taste the weed in the brownie but now it's not even like that. They have spots now that make red velvets cakes and lemonade iced tea and chocolates.

I can't handle it, makes me hallucinate.

Ya see? It's too strong, it's a different high. I mean when I used to do the edibles I couldn't even drive a car! Now, I smoked for a lot of years and used to drive on long trips with 3 or 4 blunts and I was cool with it. But with those edibles, uh uh, I couldn't eat two red velvets and drive a car!

Is there a particular restaurant or meal you crave when you're high?

I used to like to smoke and go to In-N-Out Burger in LA and get the grilled cheese, lettuce tomato and cheese — it was so good!

Your music and philosophy is very inspired by martial arts and Eastern culture, has that informed your dining habits at all?

Of course, it all plays a role and has some sort of connection. One of the first dietary books that I read was called How To Eat To Live by Elijah Muhammad and a lot of health books dealing with Eastern philosophy. I mean really some of the best philosophy books are from the East because they deal with diet, health, spirituality, upliftment, consciousness, and things of that nature. And a lot of the Kung Fu flicks we used to watch growing up weren't just about kicking and fighting, they usually had some sort of strong story, discipline or moral behind it. You know, at one point we (Wu-Tang Clan) had disciplined ourselves so much that we wouldn't even eat in a restaurant that sold pork.

Wow, so is the whole Clan off pork?

Yeah, none of the Clan members eat pork but you only have about four of us that are vegetarians, including DJ Mathematics — RZA, GZA, MastaKilla and oh! I think Meth is vegetarian now too! Cuz I used to always get on him with his steaks. I used to say you "you eatin' a pig pussy T-Bone?" He'd be like, "C'mon Jus, cmon, GZA, man stop!" And then about a year and a half ago he was like, "You know I'm a vegetarian now, right?" I heard Redman was one too now actually.

I had these DVDs called Eating, the second edition. I saw it in Cali one day and it was go great that I went and ordered 100 of these to give out to family. Because everyone is dying of cancer, heart disease and diabetes — everybody's catching something. I mean, Poetic from the GraveDiggas died over ten years ago from colon cancer — he was really really young. So these DVDs are amazing and break it all down by food and hey, it effects health, disease, and growth. So I gave out about 30 of these DVDs and one of them to DJ Mathematics and you know he DJs for The Clan, Meth, Ghost and he started off as my DJ before the Clan even existed. So one day he used to play it on the bus and everyone that watched this DVD claimed they cleaned out their refrigerator the next day! Now I have people asking me, "Man, I want one of those DVDs."

Okay so now for your top choices!

GZA is currently recording a sequel to "Liquid Swords" and working on a collaboration album with indie acts including The Black Lips, Mogwai, Of Montreal, King Khan, Yeasayer and Devendra Banhart. He is currently on European Tour with the Wu-Tang Clan.