Top Chef D.C. Episode 6: The Spy Who Came in From the Awkward Cold War Reference

Share All sharing options for: Top Chef D.C. Episode 6: The Spy Who Came in From the Awkward Cold War Reference 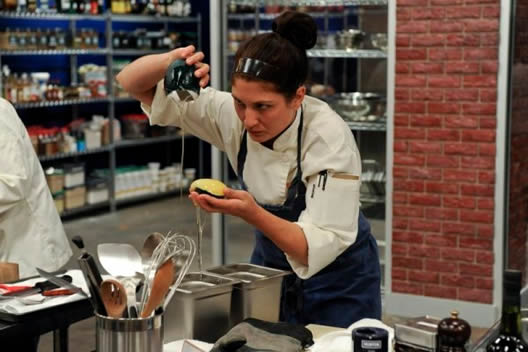 Hey guys, who likes abbreviated, arguably incomplete and almost certainly inaccurate Top Chef recaps? You all? Perfect. That is perfect. Because I'm in San Diego at ComicCon for work purposes and I had to watch this week's episode on a plane. But don't worry: I took spotty, handwritten, Bourbon-fueled notes. (The other passengers were probably wondering why someone was furiously writing down things as they happened on a Bravo television show. I bet they just assumed I was a fancy professor at a two year college.) Plus, I have terrible, embarrassing handwriting, so my chicken scratch looks like a six-year-old boy writing a letter to God asking him to not make his bones hurt anymore. Please excuse me if I can't perfectly remember what was crusted in what and who infused whom. I'm currently sitting cross-legged on the grass in a 9,000 person line waiting to see three minutes from the film Salt four hours from now. Forgive me. (That's to God and my parents, not you guys.) 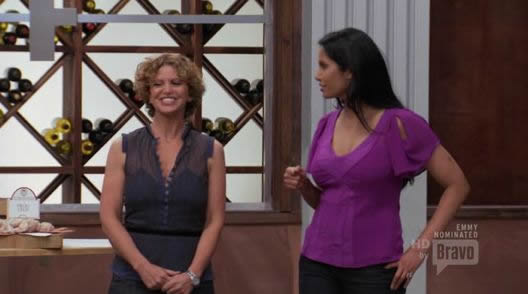 This week's guest judge is Michelle Bernstein, a chef in Miami at a restaurant called Michy. Andrea's not happy to see her because they are peers down there. Kind of. Andrea says Michelle's food isn't any better than hers. Andrea later admits that Michelle's career leapfrogged Andrea's after Andrea decided to have some babies. Andrea says she doesn't regret her decision to make children but she certainly says it like someone who regrets her decision to make children. 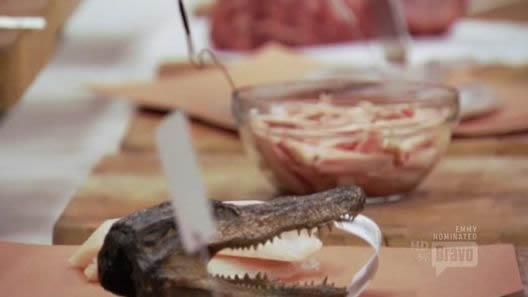 The Quickfire is peculiar proteins: crocodile, rattlesnake, emu eggs. Things like that. The chefs draw knives to see who gets to pick first. Angelo chooses "duck white kidneys." He's quickly informed they are testicles. Ducks have testicles? That's the real surprise here. Ed says he once cooked with duck white kidneys at a restaurant with Todd English. Coincidentally, when he says this, I am eating a Todd English Signature Orzo Salad on my Delta flight. (Todd's picture is on the menu. Very tasteful.) It tastes a lot like what I like to imagine duck testicles taste like. (I like to imagine what duck testicles taste like.) 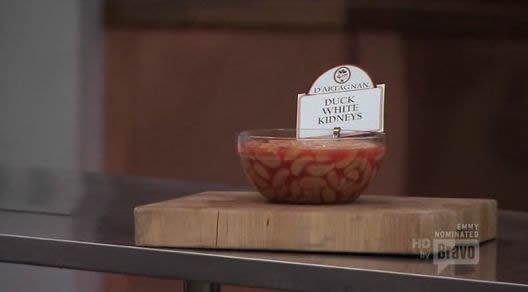 The chefs have 45 minutes to cook their dishes. Many struggle. Amanda wears a chainmail glove and tries to saw through her emu egg. But oh what, there's a twist! This show! Always with the twists. The chefs must switch proteins and pass it to the chef on their left. Amanda is happy for the switch. "I'm back in the saddle again!" I don't think she understands what that phrase means. But I am really happy for her and her unbearable way of speaking. Stephen went from crocodile to frog, "not a big leap, no pun intended." No pun TAKEN, Stephen.

Michelle's least favorite dishes are Stephen's insipid frog legs, Alex's dry ostrich egg, and Andrea's undercooked beef. Rivals! She loves Tamesha's duck tongue soup and Amanda's whatever it is Amanda cooked. But the winner of immunity is Kelly's emu egg and goat cheese omelet. Her first Quickfire win! Except for when I hate her, I really like Kelly these days. "These days." What am I talking about? This show's been back for six weeks and takes up a few hours of my life every week. I am not always thinking about Kelly, I promise. 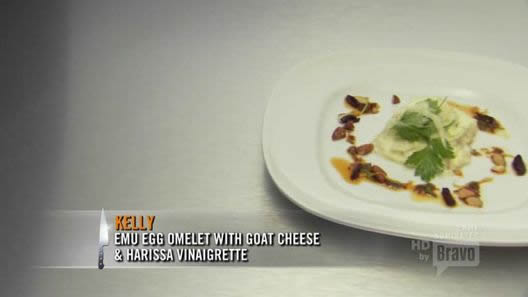 This week's Elimination Challenge is called the Cold War. "Make sure your food's not stale, mate." East German versus West German cuisine? Make food so hot it threatens the world with thermonuclear annihilation? No. They just have to make things that are served cold. Temperature cold. They really "got" the spirit of the Cold War with this challenge, I think.

The chefs split into two groups. Group A will eat and judge all the food of Group B, and vice versa. Each group nominates one winner and one loser of the opposing group. I bet that they will be catty and miserable about it! And I am right. I wish I'd really made a bet instead of just using that word figuratively. 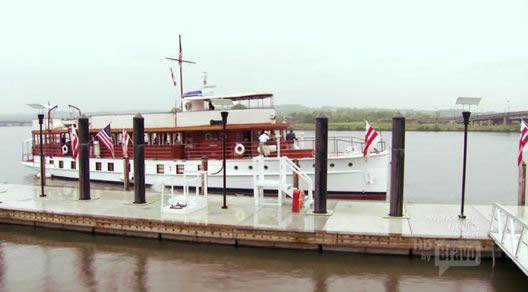 They are cooking on the USS Sequoia, where Nixon negotiated the nuclear arms treaty. Smell the history. Angelo is giving out lots of unsolicited advice on how people can make their dishes. Don't trust him, he is a bad guy! Andrea says Angelo tries to "possess people's minds." What is this, "Scanners"? I wish. I wish people's heads were gonna be exploding. But they are not. Ed mentions that he used to sleep with Angelo's girlfriend. Yuck. Let's all grow up.

During the commercial break, Bravo puts up an online poll. "Would you eat duck testicles? A. Yummy! B. Never." Those are not the only two answers, I promise. Did you text your answer? Maybe the polls are still open. The greatest freedom we Americans have is the freedom to vote. Don't waste it.

The chefs have two hours to prep at the Hilton. As usual, the KitchenAid meat grinders cause problems. Amanda runs around like an annoying chef with her head cut off. Tamesha smartly says, " I could strangle her in a heartbeat." Could? Would? Should?

Group A serves first. Or Group B serves first. Whatever. One group goes first. They don't go at the same time. Amanda serves her chicken galantine and Andrea gets a bite of cartilage. But the rest of the chefs think Kenny's lamb duo was the worst. Is there strategy at play here? Angelo's always got something annoying up his sleeve. And, a surprise to all, Kevin's surf and turf of tuna and veal is their favorite. 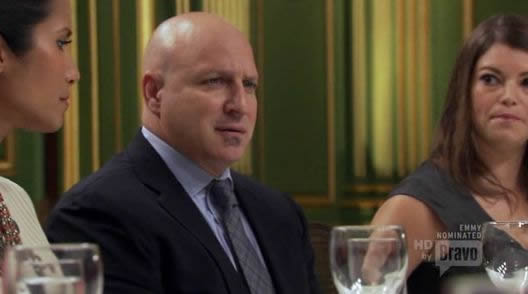 As Group A sits down, Tom says, "You should have heard what they said about your food. Oh my god." Yeah, Group B were jerks. Group A is nicer in their comments. They love Tiffany's peppercorn crusted Ahi tuna. Kevin would eat Angelo's salmon again and again. Everybody's unimpressed with Stephen's chilled beef with crispy rice. Ed says, "It's like that saying: where's the beef?" That is not a "saying." That is a slogan from a commercial. Whatever. Go sleep with somebody's girlfriend. All are in agreement that Tamisha's cold scallops with rhubarb jus and longpepper is hot and disgusting. She's on the bottom, Tiffany's on the top.

Tiffany and Kevin are called to the Judges' Table. Both are a bit surprised to be on top! Tiffany because she worried her dish was too simple, and Kevin because he has no self esteem. Well, have some, Kevin. You win!

Kenny and Tamesha are called in as the least favorite. Kenny chalks it all up to a conspiracy. The other team must just be trying to eliminate him, right? Michelle, in her only non-hateable moment of the night, chimes in, and says she has no idea what has been going on in the show, just that Kenny's dish is really bad and overcomplicated. Zap!

Tamesha stands by her dish but the judges have lots of problems with it. Overpowering pepper and a terrible texture on the scallop. It's enough to send her home, and she's not happy. She thinks she just made a tiny mistake. She has a while to think about that. 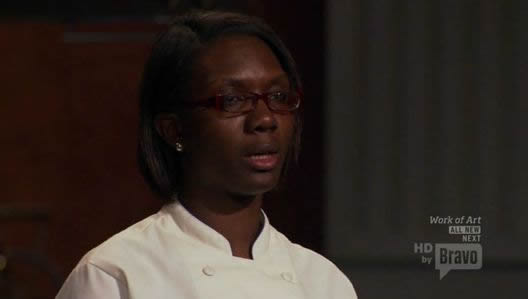