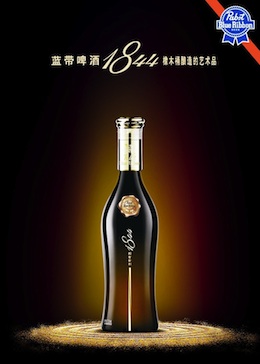 Some of the blogs ran a story this morning claiming that Pabst Blue Ribbon was selling for $44 in China, which turned out to be technically untrue. No, it just turns out that Pabst sells swill in the states, and gives the decent beer to China. According to Alan Kornhauser, a brewmaster who works for Pabst in China, "Blue Ribbon 1844" is entirely different from the cheap beer hipsters ironically know and love in America. It sounds kind of good?

Kornhauser says the beer is aimed at the nouveau-riche, and that Pabst has hopes it will replace brandy at state dinners. From an interview with All About Beer:

With Pabst, I just made the first specialty beer in Mainland China...I formulated a special high-gravity ale called '1844.' It’s all malt, and we use caramel malts from Germany. The initial aging is dry-hopped rather heavily. Then we do a secondary aging in new uncharred American oak whiskey barrels. We bought 750 brand new barrels to the tune of $100,000. This is a very special beer; it’s retailing for about over $40 U.S. for a 720 ml bottle.

You may love PBR, youths of America (and Dennis Hopper), but clearly the beer's got a crush on China.