Share All sharing options for: Traci Des Jardins on West Coast v. East Coast, Ladychefs and Fights in the Kitchen 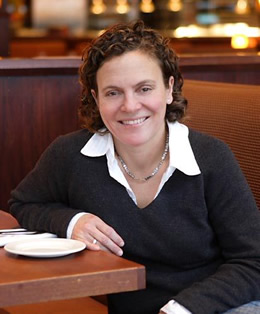 Traci Des Jardins, of both San Francisco's Jardiniere and Mijita, a SF taqueria, is a small, intense and busy woman. She's trained at some of the best restaurants in the world under the best chefs including Alain Ducasse at Louis XIV and Claude Troisgros at Restaurant Troisgros, and she's won nearly every Best Chef prize one can — F&W, Beard, Esquire etc — with Jardiniere, which was one of the first SF restaurants to wed sustainability and fine-dining. Between December 2009 and March 2010, she opened three restaurants. She was recently in New York for a charity event and a talk. We squeezed in a seven am coffee to talk shop.

I did a little talk last night about food in Park Slope with Kim Severson and [NYT reporter] Michael Moss. It's where his kid goes. Basically we were talking about the public school food system.

Is there a big difference on the East Coast and the outlook on the West Coast?
This issue keeps coming up. The East Coast is following the West Coast in terms of the sustainability movement, paying attention to where food is coming from and supporting local farmers and local producers. There are a few steps behind on this coast than they are on the West Coast. I sat down with a journalist here seven or eight years ago. You would have thought I was speaking French because they completely glazed over and had no response to what we were talking about whatsoever. They looked at us like we were hippie freaks.

Now we're preaching your Gospel. During the time when you started was there anything going on outside the kitchen that provoked the greening?
The whole issue of garbage becomes a huge aspect of greening a restaurant. How you deal with waste is a huge part of greening. About 8-10 per cent of our refuse is actually landfill garbage. The rest we recycle and compost. That is a program that has to be supported by the city.

If you look at the amount of refuse one restaurant produces in a week, you can understand what the impact is on the environment. It's bothered me for a long time. The fact that Styrofoam still exists, packaging in general. That is unacceptable to me.

You must hate T.G.I. Fridays!
From a food standpoint but also from a consumer standpoint. It bugs me. Even toothpaste containers, CDs, It's all over-packaged.

Tell me about what's going on in San Francisco. It's been a whirlwind.
I just opened three restaurants between December and March: Mijita, Public House, and Manzanita at the Ritz-Carlton in Tahoe.

Is this part of your manifest destiny?
No, just bad planning. I had the Ritz Carlton restaurant project on board and was working on that. Then my business partner at Acme Chophouse — which is the restaurant I run at the AT&T Park — decided he wanted to close that down and reconcept. I was in the process of getting the Ritz Calrlton open and I had to close down, reconcept and redesign.

How did Acme change? There was that infamous Michael Bauer review...
Acme was always too high end for a ballpark, so we wanted to speak to the demographic and make it more of a ballpark restaurant. The Bauer review was sort of the nail in the coffin. The restaurant never really thrived. That location was a bit challenging. The perception was that it was a ballpark restaurant and that we'd be closed on the off-season, which we weren't. So we did well for 85 days a year.

The part of the review I took most exception to was the part where he complains that the restaurant is really boisterous. He came in on a game day, the restaurant is intended to be oriented toward baseball and it fills up with baseball fans and it's a boisterous and wild environment. I don't see how that is our fault.

The criticisms of the food? He wrote, "I can't remember the last time I've had such sloppy food."
I think there was validity to it. Any restaurant that has a theater turn or is oriented around a sports event, inevitably you'll have that restaurant fill up completely and then empty out. There's a huge impact. Jardiniere is like that as well because we have the symphony and opera right across the street. At Jardiniere it happens in an hour and a half; At Acme it was an hour. Inevitably it was hard on staff. There's the X-factor there.

It's the negative impact of culture on food.
Exactly.

At Eater and in the food media world, there's been a lot of conversations about women chefs and why there are so few.
My favorite subject [sarcastically]. It's a question that gets asked over and over and over again. Do I feel kinship with other women? Well, we do tend to band together a little bit. If I'm going to a new city, I'd probably be pretty likely to reach out to women chefs I know there. I'm friends with most of the women chefs here: April [Bloomfield] and Anita [Lo] and Gabrielle [Hamilton.] We seek each other out.

Those three women run their own kitchens. At this point in their career, it's not a man's world they work in. It's their own. Do you feel women in the food service industry at the back of the house deal with more challenges than men?
I don't think so. Being a chef is hard work. It's hard work for everyone. It's not harder for women. I never perceived discrimination when I was coming up. Did I have to be tougher than the boys? I don't know. I had to be as tough as they were. You don't get cut any breaks. If you're not as tall or as physically strong, you have to compensate for it. But I always felt that was on me. It was fine. I didn't feel like I was at a real disadvantage. If anything I was at a disadvantage because I was short and men can be short too.

When you were coming up through the ranks at Troisgros, you must have dealt with a lot of the old style quasi-military sadistic training.
Oh absolutely. People ask me if the Gordon Ramsay thing is real. Oh absolutely. Is it played up for television? Yes, sure. But I certainly worked with insane chefs a lot. There were fights in kitchens. There was a lot of yelling and screaming, labor practices you'd never get away with today. I remember one time when I was working at Louis XIV [in Monaco with Alain Ducasse], the sous chef was pretty psychotic. He was a tiny guy and he was always up in everybody's face. There was one dishwasher he would just torture. The guy was huge. He was 6'3" and just this slow moving guy. One day during lunch service I look over at the sous chef and his ear is bleeding and he has a huge slice on the side of his head. The dishwasher had finally had enough and took a plate and just smashed it over the guy's head and almost cut his ear off and he walked out. That was it. I've got a lot of stories like that. It's just a pressure cooker and at some point it pops.

I assume that's how you run your kitchens now.
Yeah, well Northern California makes you soft. When I moved to San Francisco I had a reputation of being very aggressive, a screamer, and people were afraid of me. I was trained like that so that was my management style. At some point I went the other direction. I don't scream any more. I did. I screamed. I threw things. I had a few pushing matches. I remember one time at Rubicon someone talked back to me on my line, I was on the expediting side, and I went around to the other side — this latin guy — and said, "Get out." He looked at me and puffed up his chest. Three inches from his face I said, "Get. Out. Of. My. Kitchen." He didn't exactly back down easily but he left.

Would you ever consider emerging from your soft NoCal cocoon and come back to the East Coast?
I contemplate Mijita here. I think there is a dearth of good Mexican food here. And California has a saturation of Mexican food. That's the concept I would choose for here.

You have been on television — two notable appearances, one beating Mario Batali on Iron Chef America and one in The Next Iron Chef.
Which was horrible.

Tell me about the victorious appearance and the complete failure?
When I approached Iron Chef America I knew the Iron Chefs win more than they lose so I didn't go into it thinking I would win. I just wanted to finish five dishes and make good food. It never even crossed my mind that I'd win.

The Next Iron Chef?
It's a story in contrasts. There was part of me that felt I was too established to be put through that exercise. It was so different from Iron Chef America in terms of formatting. I got cranky about it. I was sort of like, "I don't want to play this game." You're sequestered and you're staying in an icky hotel and we didn't have coffee in the morning. I was like, "We're at CIA. You really can't give me an espresso?" I kind of self-destructed.

Is that your last foray?
I was a judge on Top Chef last season. I was a panelist with Thomas Keller, Daniel Boulud and Gavin Kaysen.

In terms of being judged?
Who knows? I don't know if I'll jump right back into the reality TV thing but you never know.