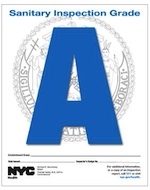 Meatopian Josh Ozersky chimes in on New York City's upcoming restaurant grading system: "Right now Americans seem to be clamoring to dismantle the government, and in many states the most basic regulatory aparati have fallen into disuse. But New York and L.A. have become downright draconian in their urge to oversee the inner workings of small businesses like restaurants. Is this the rise of a counter-cultural oasis, nanny-state bastions in two of the country's most liberal cities?" [Time]