Fake Exit Interview: Timothy Dean's Down To The Wire

Share All sharing options for: Fake Exit Interview: Timothy Dean's Down To The Wire 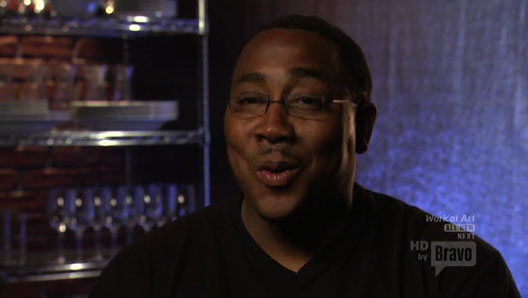 Timofey, you were sent home last night because you didn't make a mousseline out of turnips.
Shiiiiit.

Indeed. There was a lot of talk before you left between Angelo and Kenny as to who was the "alpha male." Your name was notably absent from that discussion. Why?
Ayo, lesson here, Bey. You come at the king, you best not miss.

It also seemed, regarding the challenge which led to your demise, that you had lost your confidence. Wha' happened?
There's game beyond the fucking game.

So you're saying you threw the competition? Why, because you don't need $125K?
I'll take any motherfuckers money if he givin' it away. Money's aint got no owner. It's only got spenders.

Interesting. What are your plans now? I mean, didn't you just sue National Harbor for backing out on a big deal with you?
Yeah, West side is about be all Baghdad and shit.

When you packed your knives and left, you seemed like you were defeated. Is this really the last we'll see of you?
Nah, My word is still my word. In here. In Baltimore. In any place you think of calling home, it be my word that finds you.

Ok, I guess I'll see you later then!
Shiiiiit!