Part Two: Dana Cowin on Being Positive, the Blogs, and Flying on Private Jets

Share All sharing options for: Part Two: Dana Cowin on Being Positive, the Blogs, and Flying on Private Jets 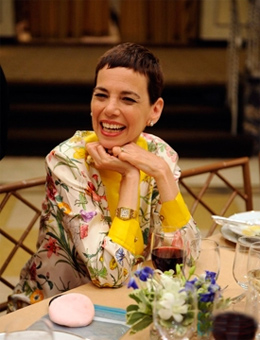 A week or so ago, I sat down with Dana Cowin, the editor-in-chief of Food & Wine, an indie food zine she prints out of her basement in New Jersey on an old mimeograph machine. [I kid. I kid.] We ran the first half of our sprawling conversation, here's the heavily-edited second half.

You eat out all the time, what are some of your pet peeves in front of the house?
A well-placed meal is a beautiful thing. I've been in restaurants where you've got great pacing and then something happens and you don't know what. Sometimes you find out later. For example, I was at a restaurant, the meal was going swimmingly and then Frank Bruni walked in. My meal stopped. For the rest of the evening, we didn't get another course for a half hour. I know the exact moment that they realized Frank was in the room.

What restaurant?
I'm not telling but they did get a good review.

Did you ever work in the service industry?
No. My first job for which I was paid tips, was as a counselor-in-training at a day camp. I was not good at that. What I really wanted to do was I wanted to write fiction. In fact, I tried to write fiction for a year in between Vogue and House and Garden, not knowing that House and Garden was to come. But, it turns out, boy is that hard to do.

What is your take on the blogging world? Is it a net positive or is it a challenge?
I think the food blogging world is awesome. I think so because it is more of those people who really like stuff and they have very honest relationships to it. A lot of bloggers are blogger cooks. It's really great. I appreciate their sincerity.

What blogs do you follow?
I cut an incredibly superficial, broad, and ever-changing swathe of bloggers and I do it on purpose. I go onto Foodbuzz and just check out what everybody is doing. Then I check out the obvious people. I love 101 Cookbooks and I love the idea behind it. I think there is a really beautiful complementary role between the critics/experts and the enthusiast, at least in the world of cooking food, not in the world of restaurant criticism.

Is this focus on the positive what sets Food & Wine apart?
I don't think the positive separates that much from the others. What separates us is the connection between the lifestyle and being the center of these spokes, the taking into consideration this modern style of design, the new trends in wine and food, the always looking ahead. You don't have to eat beyond a hamburger to enjoy F&W, but you do have to be interested.

How do you stay so skinny when you eat out all the time?
I eat out twice a week. I can be out more nights a week if I can be home by 7:30. I don't have to go out because [Restaurant editor] Kate Krader goes out. Kate is so unbelievably incredible. She knows every tremble in the restaurant world. It's like she's on the inside of the Earth and she can feel it shaking.

I always find it a challenge eating out at the hipster locavore places, because that food is so calorically intense. It may be local but it's actually not that good for you.
I did a story in March. I don't do that many stories but I felt really strongly that all those places the food is completely delicious and yet there's nothing you're dying to eat that is healthy on the menu. If you go there, you really need eat the pork extravaganza. I want those chefs who know how to make compelling compulsively eatable food to make something healthy.

I've always wanted to do a study on the blood pressure and cholesterol of hipsters.
That's a good idea!

How was the Food & Wine Classic at Aspen?
Aspen was fantastic. We had a really great line up of chefs and winemakers. It is always so great because the town is so small. So there's that level and then there's the parties.

You still party.
That's so flattering. That implies I ever was a partier.

You know, 21 at Vogue, after a ballet performance?
I did lead a Studio 54 lifestyle for a while in my teens. But now if I'm out at 2 am, we take pictures with time and date on it so people believe me. But there were many many demos that started, "I went to bed two hours ago?I better start drinking again?"

Do you have a favorite festival?
I guess Aspen because we conceive it and run it and we've done it for 28 years. On the other hand, I love the different energy. South Beach is where I'll stay out until 2 in the morning. I love the feeling you get there, you have more skin.

What was the most interesting part about Aspen?
Well, this year the private jet company Bombardier was a sponsor so there was a sommelier plane and a chef plane from New York to Aspen. How sweet is that? I got to go one way, back. It was awesome. It was gorgeous. Your car picks you up and gets you from your condo to the plane door. Then you get on the plane with burled wood and there's cushy squishy seats, with seats facing each other, then a seat and a banquette. I was taking decorating tips from the private jet.

Who was on it?
On the plane were Drew Nierporent; Morimoto, Mark Stone — who is his agent; David Chang, Kate Krader, Christina Tossi, and then behind us was Joe Bastianich and Tom Colicchio. Sitting there talking to David Chang for three hours with the others popping in about the state of cooking today was amazing.

What did you guys talk about?
We had this whole conversation of when a chef is in his or her prime. Dave said "You have to be young, unmarried and with no children." I was really pushing up against that. I was saying, "No, there's different types of creativity." Tom, who was sitting behind us, comes back to the conversation and I said Dave, "Ask him the conversation but don't prejudice the answer." So Dave did. "Tom," he said, "when do chefs make their best work?" and Tom, without missing a beat, replied, "When you're young, unmarried and when you don't have children." It's that simple?

Well, is it?
I think they would agree that there are other types of creativity that come later. Because these guys are chef/students —they're chefs but also students of chefs — they know the chapter and verse of food. This chef, this age, this dish. Dave asked, "Tom, when you made the Crab and Uni at Mondrian, how old were you and will you ever be that good again?" Dave Chang was in high school or ten years old when Tom made that dish. Tom said, "Creativity's a muscle but you have to work it a lot harder later on. There's a fluidity to ideas when you're young, you have the great ideas and they come through your hands." And it comes easily and it comes again and again." You can create a body of work and an idea around that body of work with this intensity and focus that is so important to breaking new ground. It's not that you can't do interesting dishes later, but the gambit is that you never do MORE interesting dishes.