Last Sunday’s fleshapalooza Meatopia, held on Governors Island in New York City, made for some good eating. The last time we covered an event for Eater, it was the Great American Food and Music Fest, a mega-production inside the newly built Giants Stadium. The food was okay, the setting was repulsive, but most importantly (and lame), the star chefs weren’t cooking. They were onstage touting, for example, their new line of restaurants opening in Harrah’s casino.

The things that made The Great American Food event lousy were out-of-play at Meatopia. Governors Island made for scenic backyard, which is where barbecue belongs. The relaxed atmosphere made the chefs accessible, and it was clear they were there for the food; they weren’t on a stage wearing a Madonna-like headset microphone.

They were there with you, feeding you, sweating with you, for the entire day. No quick ten-minute appearances, no talking while others cooked. We watched them work, watched them occasionally screw up a bit, and watched them managing their crews. I’d say Seamus Mullen epitomized that more than anyone — props to the guy for sweating through the roasting and butchering of two whole lambs to turn out hundreds of plates of food.

The organization of Meatopia was pretty underwhelming. We heard a lot of complaints after we left of people demanding refunds, long lines, no food, etc. and it is true that while we were there it was a bit hard to relax and enjoy the day because in the back of our minds there were always thoughts of the next ferry’s arrival and the mayhem it would bring. We left two hours before closing; more than a few of the vendors had sold out and shut down, and packed boatloads of people were still arriving.

We did opt out of certain lines because they were just too long, and by the time we got to Hill Country, The Little Owl, and The Harrison (for a second helping of Amanda Freitag's great lamb) they were sold out. We made a point of getting there a bit early — we wanted to see the chefs in action, talk and take pictures. And not because we were writing for Eater, but because that’s just us.

· Blueberry and Apricot ice cream from The Bent Spoon

· Chicken Meatballs with white beans, roasted tomatoes, and watercress (what we felt was like a perfect picnic dish) from The Meatball Shop

· Grilled Chicken from Barbuto. Not with papaya as the menu said, because, as chef Jonathan Waxman said, “Fuck the menu.” (When I said “the papaya wasn’t speaking to him” his ears perked up and he responded “you know me!”)

· The home run for us was the char grilled English lamb chops from The Harrison. Herb rubbed, a bit of anchovy in the marinade — really amazing. Our interaction with Amanda Frietag drove home what a good concept the day has: there was nothing between her and us except for a pair of tongs: 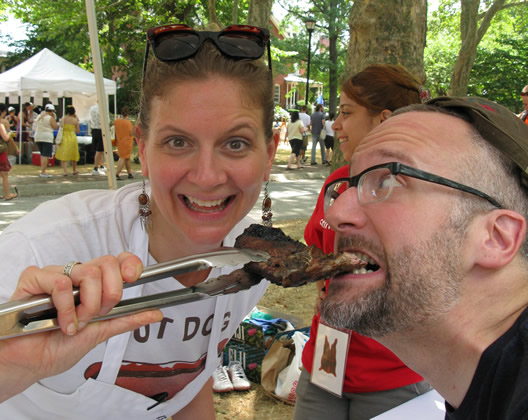 As a side note: we must respectfully disagree with the Meatopian judges: They selected Seamus Mullen/Boqueria as best lamb of the day and while he may be the hottest chef and his lamb certainly was tasty, it is Amanda Freitag’s charred lamb chop that i keep wanting to eat again. And again....