Share All sharing options for: Tom Colicchio, Big Gay Icon, to Ride on a Bear Float in LA Pride Parade 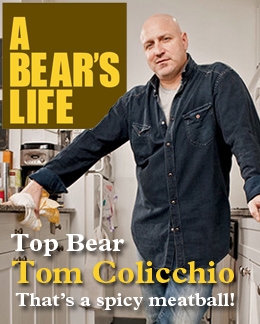 Chef and Top Chef judge Tom Colicchio is a big gay hypermasculine icon, especially popular with the bears, so much so that he's apparently agreed to ride on a bear float in next year's Los Angeles Pride parade, reports the Dallas Voice.

Colicchio told them, "I was on Andy Cohen's show on Bravo [Watch What Happens] and said I was mad at the bear community: The gay Pride parade was going on, and no one had asked me to be on a float." Soon thereafter, the show was flooded with phone calls, including the editor of A Bear's Life magazine who helped set it all up.

Update 07/14: Tom Colicchio let us know that he will not be riding on a bear float.