Hey, you know what America needs? More novelty sandwiches from fast food restaurants! Up next: the battle of the footlongs. Unwilling to be outdone by Sonic, who unveiled their new Footlong Quarter Pound Coney earlier this month, Carl's Jr. is testing Footlong Cheeseburgers at their Santa Ana, California locations. 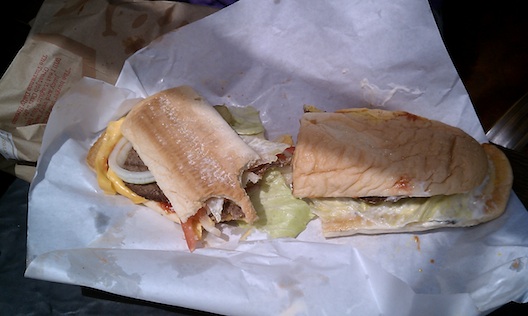 Unsure of whether it is a sub or a burger, the Footlong Cheeseburger consists of several small beef patties on bread that "seems a little off," according to Food Beast man in the field, Elie. The Footlong Cheeseburger comes in normal and "Deluxe," which adds onions, lettuce and tomatoes. Other than that, it just seems like a normal cheeseburger, but longer. So, on a scale of one to ten, one being a plain slice of white bread and ten being a chocolate-dipped Double Down on a stick, we'll put this at about a two.