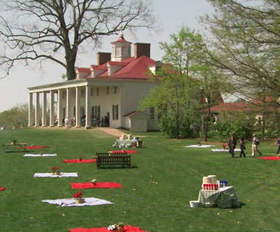 Are you still reeling from last week? Here's the quick version: Jacqueline is gone, Arnold enjoys spending money on himself, Angelo is still probably a spy, and Kelly completely on her own invented pork carnitas tacos and won the Elimination Challenge. What a good invention! "Let me get this straight. You slowly cook fatty pork butt until it's fork tender, then you pull it apart and roast it at a high heat to caramelize parts of it and create a very particular alternating texture of softness and crispness, then you serve it on a thin circular piece of corn dough and eat it with your hands? Somebody tell the Mexicans about this. What a brilliant original thing."

We see the chefs preparing for the Quickfire. Kenny is very tired of being second fiddle to Angelo, but luckily his girlfriend misses him and hopes he is beating everybody. Meanwhile, Amanda sits on a yoga ball and brushes her teeth in Dr. Seuss pants. 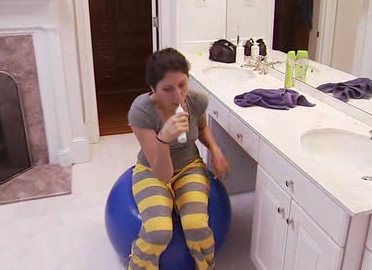 And, oh boy, Angelo really feels his spirits dampened by how he threw the competition last week and then told Tracey he didn't like his teammate Kenny. That must really bum you out, Angelo. The way in which you are a dick, I mean. He says that it all makes him want to isolate himself. So he takes a seat in the isolation garden? 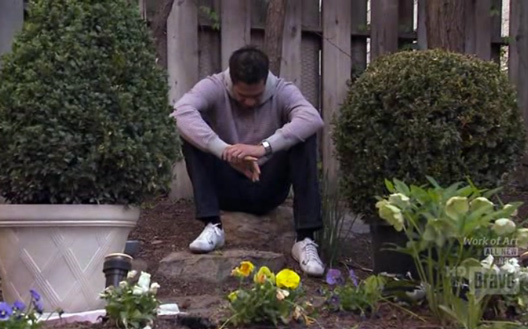 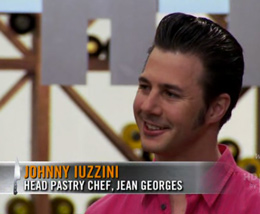 Padma introduces this week's guest judge, Johnny Iuzzini, the Head Pastry Chef of Jean Georges. Iuzzini is always being included in various "hot chef" round-ups on the Internet (not that I read them), but I think that is only because writers really miss his work with the Squirrel Nut Zippers. "This is my famous Cherry Poppin' Daddies Pie." It must suck for Iuzzini to be such a well-known food personality that people, even on closed and highly secretive reality television sets, are always trying to steal your wallet. 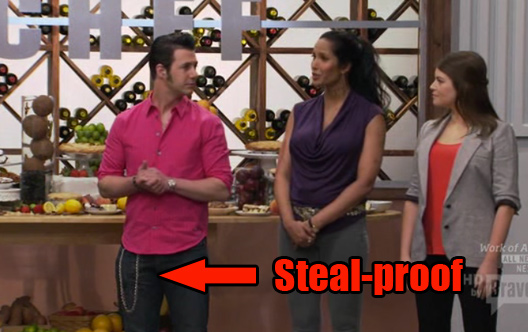 Anyway. Enough, Johnny. We get it. Even though you are a dessert chef and have a slight lisp, you call yourself "Johnny" and dress like a greaser. You're tough! No one is arguing! You probably gave yourself a tattoo in prison with a Bic and a lighter that says "Petit Four" across your knuckles! (One of his hands has six fingers.) Let's all just relax. I promise I won't try and steal your wallet.

Joining Padma and Johnny is Gail Simmons. She and Johnny will be hosting the upcoming season of Top Chef Desserts. When that's announced, the chefs all APPLAUD. What? You are clapping and smiling because these two people you do not know at all get to host a spin off of a TV show you're on? I am baffled by the logic.

For the Quickfire, the chefs have to all make a pie, because pies represent America but also needing to be organized. Pie your hardest, guys. The show should have given them three hours and fourteen minutes to complete this challenge, but that probably would have made too much sense. Instead, they all rush into the kitchen to begin being mediocre.

And mediocre is sort of the theme of this episode. For the most part, the chefs do a bad job at everything and do not resemble professional chefs at all. (Sorry for the real talk.) In this challenge, the cheftestants trip over themselves to say how they are "savory chefs" and "have never cooked a pie" and "what's a pie" and "how come my fingies bubble when I hold my hand over the hot hot?" What a bunch of dummies. Like, these guys have seen the show, right? They understand that desserts are consistently and without fail a source of frustration and elimination for the chefs? Maybe memorize a couple recipes?

Ed, whose secret ingredient is a great memory, decides to make some sort of play on celery and peanut butter. Remember how well that worked out last week for YOUR team last week, Ed? Maybe Ed was too distracted by Alex and his disgusting thick-crusted tapioca pie. Do not get Ed started on Alex. "Alex is a slob. A mess. I hate him. He's gross. Did I mention he's a slob? He's got a face like a butt if all you ever ate was beef jerky, and you ate the jerky through your butt not your mouth, but then your butt fell off because it was sick and then it got left out in the sun for a hundred years and birds lived in it but then all the birds got sick too."

Not surprisingly, Ed and Alex's two desserts are Number Johnny Pie's least favorites. Maybe this poor showing will let them move past their differences. Johnny does like Kelly's Spiced Rasberry and Dark Chocolate Ganache Tart, and Stephen's Curried Apple-Date Pie with Saffron. But it is Kenny's Bananas Foster Pie with Currants & Chinese Five-Spice that nets him his first challenge win. 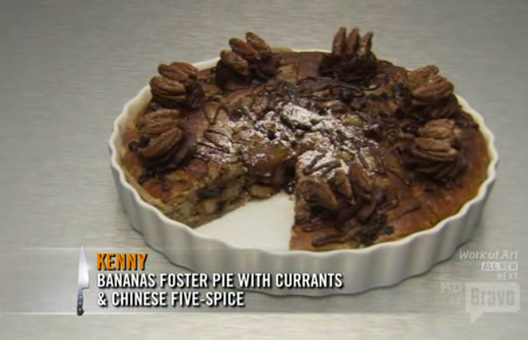 Poor Stephen. "I'm hungry for a win. I want to be the guy on top." You will get your chance. I'm sure of it!

To stave off elimination this week, the chefs must prepare a summer picnic at Mount Vernon for 150 Capitol Hill interns. Interns! An American tradition. (For children of wealthy parents.) I am impressed with how out of character the show acts by avoiding intern jokes. "My salad has a BLUE (cheese) DRESSing. With a stain on it!" Good for this show. Shame on me.

The chefs work to prep their one entree and two sides each. Arnold says, "I'm doing a lamb meatball, if you will." If I will? I will. Tracy is trying to grind meet for sausage but flipping out and talking to herself. This doesn't seem to be going well for her at all.

Amanda and Alex get in a scuffle over who claimed what oven and when, just as Tom is walking into the kitchen. Amanda claimed she'd put her name on the oven (huh?) and took Alex's braise out. Amanda tells Chef Tom that she's playing by prison rules. Tom: "I've never been to prison." Has Amanda? Maybe for her intense problem with cocaine and pills and "anything I could get my hands on?" Yikes. I mean, sure. Good for her for overcoming it and then running a restaurant, but also yikes. Amanda, you know you don't HAVE to tell them EVERYTHING when you're in that confessional booth? It is not like real confession. They are not priests. Well, maybe Eric Ripert is, but the show's producers certainly aren't. How about keep some things to yourself! We all like a little mystery. I enjoyed wondering to myself in past weeks, "I wonder if Amanda ever had a problem with cocaine and pills and eventually anything she could get her hands on?" But now that mystery's gone.

Out at Mount Vernon, the chefs light their grills, which is another skill most of them don't seem to have. Arnold apes Kenny's method, which seems smart. Earlier on in the episode he said "I'm not a grill guy. It'll clog the pores way too fast." Arnold, stop it. No one is liking this. Tracey asks, "How do I turn this grill down." What? You just put live coals in a metal bucket. You should understand the basic principle behind all of this to realize you cannot just turn it all down. Whatever.

Geese render an early verdict on Timothy's pork two ways and scare Gail and crap on the table.

Alex loves his pork butt. "I'd want to eat the ass out of this pig all day." Cool. Angelo's Asian lettuce wrap things are a "magazine cover dish" according to guest judge Jonathan Waxman. Ed weirdly brags that he's already surpassed his father's career as a chef. 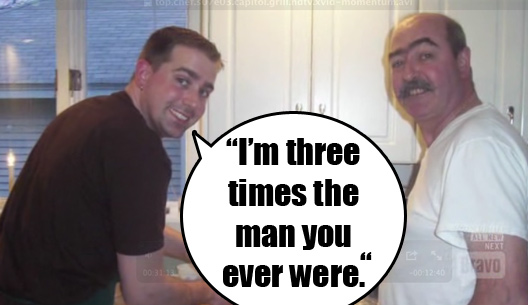 Back in the broom closet, the judges called in Arnold, Amanda, Ed, and Angelo. They did it! They made the best American picnic in the world, or something. Hopefully Ed can rub this in the face of his father. Arnold's lamb meatballs win the day. I don't like Arnold, at all, but my girlfriend whooped when his name was announced. So maybe he's not totally useless.

They call in Tim, Stephen, Tracey, and Kevin. Stephen was so sure he'd be on the top! I am really surprised! I am kidding, I'm not. The judges hated his dish so much and he seems very clueless in general. Not a lot of brains in those tiny lips. (Is that where your brains are?) Tim, a BBQ master, is near tears at the blandness of his pork. Kevin disgraced his people with terrible rice and beans. Tom says, "None of you created history with your food." Well, they are on TV. That is history, in some ways.

Jonathan Waxman says that his ten-year-old could have made sausage sliders as good as Tracey's. Tom says they are a disgrace to Italians like him. And for both those offense, Tracey is sent home. She's a total sport about it! She had a bad day, she learned a lot, and she understands why she's going home. Aw. She may have been a bit rough around the edges, but Tracey went out like a total class act. A class act who made disgusting looking sliders. Bye Tracey! 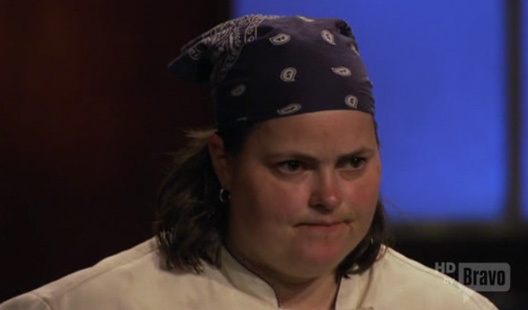