Seriously, Is There Anything Worse Than Liquid Smoke?

Share All sharing options for: Seriously, Is There Anything Worse Than Liquid Smoke? 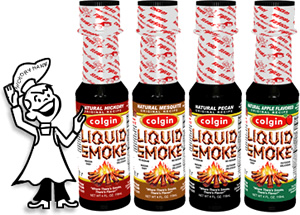 My previous two posts in the "Barbecue Frauds and Fallacies" series have touched off a firestorm among cookers and barbecue geeks, a fact that both saddens and arouses me. I wish I could safely assume that everyone agrees with me; certainly, that's the tone I take in my writing. But alas, there are divergent opinions on nearly every topic. Except this one: surely there can't be anyone out there who will defend liquid smoke.

What is liquid smoke? You probably don't even know, so unnatural and oxymoronic is this evil fluid. Essentially, it's a quasi-toxic substance that results from somehow turning smoke into a liquid. Don't ask me how they turn smoke into a liquid. I don't know, and I don't want to know. All I can tell you is that Liquid Smoke is the most immediately recognizable bad flavor known to man. It's redolent simultaneously of creasote, formaldehyde, termite mounds, the tears of mendacious orphans, crawlspaces, the acidic musk of old age homes, guano caves, vinegar, and bad barbecue. It's also an extremely common ingredient in barbecue sauces, which is one reason I hate them so much.

The question I always ask myself about liquid smoke is: Since I've never met a barbecue chef that didn't despise it, and never met a home cook that even knew it existed, who in the world buys this stuff? Is it one of those mysterious products, like Armour canned pork brains in milk gravy, that only appears in blogs? Sadly, no — I've seen it in any number of supermarkets, and there are apparently hundreds of brands you can buy on the internet.

But who buys them? And why? This is the question I'd like answered. Or perhaps I wouldn't; the users could be your friends, neighbors, or rival barbecue chefs. And if they were to win a sauce contest using a product that contained liquid smoke, there would be no recourse but to renounce human society, and live amid turtles and salamanders.