Share All sharing options for: Burger King's Ribs Are Welcome In My Pu Pu Platter Anytime 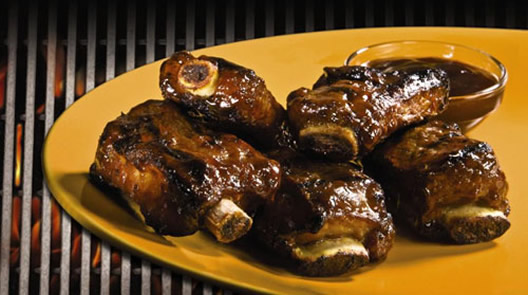 Given my imperious views of barbecue, you'd think I'd be super-down on the new ribs from Burger King, the BK Fire-Grilled Ribs. Not at all! In fact, I think they're probably the best rib product we've seen from the fast-casual or quick-service sectors of the food service industry (as we say in the restaurant business). Ribs have taken hideous beatings at the hands of the chains; McDonald's even went so far as to remove their bones entirely, something even the doctor in The Human Centipede stopped short of. Other places stew the hapless cuts in a gruesomely sweet red sauce, to the point that they devolve into a pudding-like substance, the better to "slide off the bone!" When you hear somebody brag about a rib sliding off the bone, order the burger. That's my advice.

But here comes Burger King's ribs, and they're more than respectable. In fact, they're good. [Village Voice food critic] Robert Sietsema, baffled the fact that these St. Louis-style spare ribs are cut up into little pieces, misidentified them as the "tips of pork short ribs," thus utterly obscuring something you see in every old-school Chinese restaurant pu-pu platter. (Spare ribs would be called short ribs if they were made of pork, not beef. But they're not made of beef, and no one calls them that. I suspect that Sietsema may have hit the vaporizer a little too hard.) The Chinese ribs comparison is not a random one; these little numbers are closer in spirit to what you might get at Wo Hop than anything at RUB or Hill Country. That's not necessarily a bad thing.

The glaze is sapid but not soggy, and moist without ever getting wet. The meat still has some semblance of integrity left, or at least the ones I got did. Best of all, someone at Burger King knew enough not to call them "barbecue," although they aren't really “flame grilled” either, any more than your gray Whopper patty is. Still, credit where credit is due: Burger King has produced a solid, unmolested rib where so many of its rivals have sold only sugary gristle.